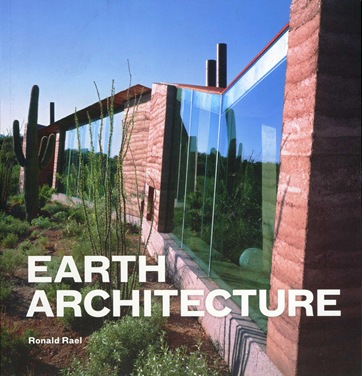 This crackerjack of a book by Ronald Rael, linked to an impressive blog, is a great starting point for finding out about earth building in general and about its uses in modern architecture via an inspiring illustrated portfolio of nearly 50 projects from around the world which use either rammed earth, Mud Brick, Compressed Earth Blocks or Molded Earth. These are some of the things I have learnt from this fantastic book which has totally convinced me that earth building is the way forward and that I’d like to get involved.

‘It is estimated that between a third and a half of the world’s population – approximately 3 billion people on six continents – lives in buildings constructed of earth.’

[In his Notes he writes: ‘Many academics, authors, builders, writers and architects have noted [this fact] although none have cited the origin of this number directly.’

‘In India there are estimated to be as many as 80 million dwellings made of earth, and in China the number of people living in earthen homes is estimated to be 100 million. In France 15 per cent of rural buildings are made of rammed earth, and the United States is the leading consumer of mud bricks in the industrialised world.’

Rael tells us there are around 20 different methods of using earth to build walls, floors and roofs. Dwellings aside, earth has been used to build a huge diversity of working and agricultural buildings, walls, monuments and places of worship.

The world’s first ‘skyscrapers’ – the 500 tower houses of the city of Shibham in the Yemen – were built up to nine stories high entirely of mud brick as was the Ziggurat at Ur and parts of the Great Wall of China.

He concludes: ‘: ‘the inherent beauty and versatility of humankind’s oldest building material will likely gain mainstream acceptance in the near future.’ This book makes a valuable contribution to that end. 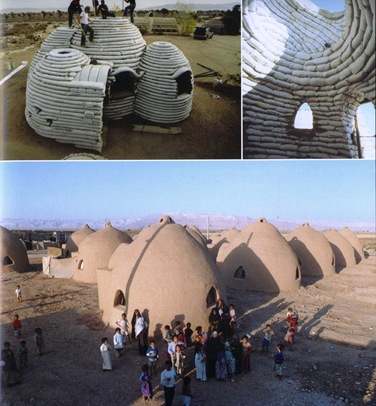 These 15  emergency shelters were built by Iraqi refugees displaced by the Persian Gulf war in 1995 using a technique called ‘superadobe’, developed by Iranian-born architect Hader Khalil, founder of the California Institute of Earth Art and Architecture. Polypropylene sandbags are filled by hand with dirt, sand or clay and then ‘stacked and wound in increasingly smaller circular patterns to form domed structures.’ Barbed wire is placed between each layer to keep the bags from slipping and to add tensile strength. When complete, the structure is plastered with earth to form an elegant earthquake-resistant shelter, built at a very los cost. 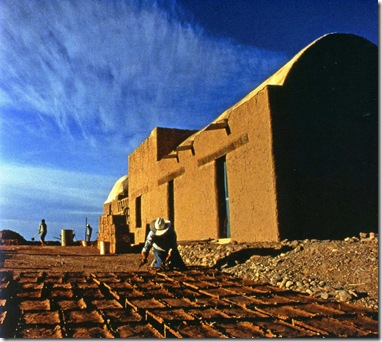 Mud brick maker Daniel Carnacho at work outside his four-room  mud brick house designed by Simone Swan director and founder of the Adobe Alliance, ‘an organisation dedicated to helping communities apply cooperative building techniques in earth architecture.’ For Swan, building with adobe is a political act.

‘Earth Architecture’ by Ronald Rael [Princeton University Press] is now available in paperback. The book grew out of Rael’s excellent blog which is here: www.eartharchitecture.org/