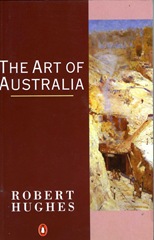 I have Lin to thank for lending me this book and tipping me off to the work of Glenn Murcutt. The other major source for this post is Murray Johnson’s website of which more anon.

Robert Hughes has long been one of my favourite writers on art but I was completely unaware of this, his first published work, which he wrote in the months before his 25th birthday in 1963. The book was published briefly three years later but Hughes was so unhappy with the edition that all but a few now very collectable copies were pulped. This is the revised edition published in 1970. No doubt there have been other major works on the subject since but I still enjoy Hughes’ passionate and punchy prose.

As yet I have only lightly scanned the book to get an overall sense but I did read a few days ago the chapter on the Heidelberg painters of the 1880s, who lived and had painting camps in and around this outer suburb of Melbourne.

They and others were involved in the staging of the legendary ‘9x5 Impressionist Exhibition’ held in Melbourne in 1889. The  majority of paintings were small (9ins x 5ins) and mainly painted on cigar box lids or board. Their statement of intent in the show’s catalogue is, says Hughes, the first at manifesto in Australian art history.

This painting was a huge inspiration to a man who was not only the true champion in modern times of traditional Australian vernacular architecture but also became the founder and chief polemicist for the post-war mud-brick self-build movement which he saw as the precursor for building a new alternative society. This man was Alistair Knox. he loved this painting not for the human activity but for the glimpse it gave him of the large timber construction of the shearing sheds of that period.

He was further inspired by the works of  Kylie Tennant who, he said, ‘opened my mind’ to the fact that corrugated iron ‘had created the civilisation of the Australian outback.’ A former journalist, at the age of 32 she set out to walk 1000kms from Sydney to Coonabarabran in the outback ok of NSW to visit a college friend who had been exiled there for his radical views. This walk through post-Depression Australia enabled her to find out about what she called ‘the men of the track’, which fuelled her socialist principles.

A third influence on Knox’s thinking was Justus Jorgensen (1893-1975), a painter and draughtsman who, with his wife Lily and the help of friends and students, established an artists’ colony in the 1930s they called Montsalvat at Eltham outside Melbourne. According to the Australian Dictionary of Biography ‘

‘Jorgensen gathered around him a group of friends and followers. He gave them the opportunity to learn to paint and to master the crafts connected with his building—carpentry, sculpture, metalwork, tiling and slating. He also offered them the chance of a freer, more meaningful life—a measure of heightened self-knowledge and the possibility of happiness, including sexual fulfilment.’

‘The first buildings were two small ‘French Provincial’ style cottages where they could stay at weekends. By 1938 work had started on the Great Hall. This mainly stone building includes two galleries, a studio and a large dining hall.
Jörgensen had the ability to make use of whatever material was at hand. The earth and stone from the excavations formed the walls, with other materials sourced from wreckers’ and builders’ yards across Melbourne.
With the outbreak of World War Two, the collective energies at Montsalvat were redirected and Montsalvat became largely self-sufficient, with a market garden, poultry farm and small dairy. Several more buildings were hastily built for the ‘farm’ - the dairy, barn, stables, silos and storehouses belong to this period. ‘

The following information on Knox is drawn from Murray Johnson’s excellent account of his life and work on his highly recommended website www.byohouse.com.au

According to Johnson, the philosophy of earth building crossed over into mainstream Australia thanks to Jorgenson's pioneering building work, a shortage of building materials after WWII and what he called the ‘unique midwifery’ of Knox. They and others consulted with G.F. Middleton whose scientific work on mud brick building help overcome the strict rules of the country’s Uniform Building Regulations.

“It is axiomatic that mud bricks will be a fundamental element in the alternative social structure today…The material itself is free. It costs a man his physical labour only, which is the same for both rich and poor. The making can be a wholly natural activity. It has good therapeutic properties. Watching the earth dry and the varying characteristics of its physical structure, immerse us in poetic deliberations that unites our heart, heads and hands.’

Johnson writes: ‘In attacking the superficiality of mainstream post-war Australian society, Knox pioneered the recycling of building materials and a whole ethic of sustainability when it was simply an obscure idea and decades away from becoming the environmental necessity that its is today’

‘The growing premonition that there could be an environmental collapse of nature intensifies the issues in ever-increasing circles, and it is this search for genuine simplification of  life style that will cause earth to become once again of primary importance a s building medium.’

Knox wrote these words in 1975

‘I believe we are involved in a movement in winning the environmental battle for survival. The alternative society is a new group of pioneers because they are identified with the total landscape in a total living way.’ So finally to Glenn Murcutt, considered one of Australia’s finest architects with an international reputation as a teacher.

Like Knox he was inspired by the timber, earth and corrugated iron vernacular architecture of Australia’s outback. 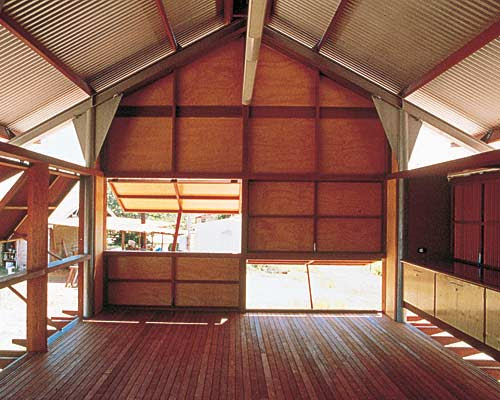 ‘This unusual house is Murcutt’s clearest discussion with Australian vernacular architecture, in particular native Aboriginal dwellings. There is no glazing anywhere on the house, which instead opts for a series of panels that can open and close, transforming the ventilation and appearance of the entire house. Built for the Aboriginal artist Banduk Marika and her family, the house was an attempt at connecting the colonial and Aboriginal cultures of Australia, prompting Marika to call it her “Bridge House.” Source: Architectural Record

More pictures and a detailed description of the house can be found here: www.rockwool.dk

‘Apparently the Marika Alderton house is so straightforward that it requires no further explanation. However, architects should not be misled by this. The house is oriented according to compass, and the eaves are precisely broad enough to prevent the facades from being subject to direct solar heating both in winter and summer. The message here is clearly understood, by using “natural” means and solutions the house is able to ventilate itself, providing the architect has offered these possibilities and the proper orientation. ‘

“I’m very interested in buildings that adapt to changes in climatic conditions according to the seasons,
buildings capable of responding to our physical and psychological needs in the way that clothing does.
We don’t turn on the air-conditioning as we walk through the streets in high summer. Instead, we
change the character of the clothing by which we are protected. Layering and changeability: this is the
key, the combination that is worked into most of my buildings. Occupying one of these buildings is
like sailing a yacht; you modify and manipulate its form and skin according to seasonal conditions and
natural elements, and work with these to maximize the performance of the building. This involvement
with the building also assists in the care for it. I am concerned about the exploitation of the natural
environment in order to modify the internal climate of buildings. Architects must confront the perennial
issues of light, heat, and humidity control yet take responsibility for the method and the materials by
which, and out of which, a building is made. The considerations, context, and the landscape are some
of the factors that are constantly at work in my architecture.”
—Glenn Murcutt, 1996

In 2002, Murcutt was awarded the Pritzker Architecture Prize. Their website contains a essay by Kenneth Framton which is available as a pdf from the Pritzker site.

In 1973, Murcutt undertook a world tour beginning in Mexico City, across the States and into Western Europe with a stop-off on Mykonos. Framtom writes:

‘Murcutt’s brief contact with the Greek island vernacular took him back to his roots, to the relatively primitive environment of his childhood in New Guinea, to the nature writings of Thoreau much cherished by his father, and above all, to the realization that a revitalized Australian architecture would have to be grounded not only in its greatly varying climate and landscape, together with its exotic flora and fauna, but also in the repressed Aboriginal culture that was to have such a decisive influence on the evolution of Murcutt’s domestic architecture. It was this plus a profound respect for the traditional Aboriginal ethic of “touching the earth lightly”—the moral principle of not disturbing nature more than is absolutely necessary—that led to Murcutt’s conception of a new Australian domus in the form of a long and narrow, light-weight, roof work, comparable in its sheltering function to the bower of a tree or, in more morphological terms, to the turned up collar of an overcoat that shelters from the wind while subtly opening its front towards the sun.’