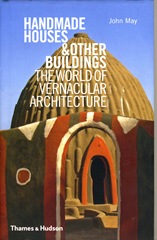 On May 2nd I was invited by the charity Article 25 to give a talk about Vernacular Architecture in general and my book ‘Handmade Houses’ in particular, at the offices of the architects Scott Brownrigg in London’s Covent Garden, for an audience of architectural students and others. Thanks to Louis, Gordon, Pete, Stewart and others for their support. My first PowerPoint presentation! You can read an account of the night here.

Article 25, who have been described by The Guardian as ‘The UK’s leading architectural aid charity’ take their name from that section of The Universal Declaration of Human Rights -  adopted by the UN General Assembly on 10 December 1948 - which states, in part:

Everyone has the right to a standard of living adequate for the health and well-being of himself and of his family, including food, clothing, housing and medical care and necessary social services…

It was founded by construction industry leaders in response to natural disasters such as the Asian tsunami of Boxing Day 2004 and the Pakistan earthquake of 2005. Both events revealed that there was lack of built environment skills in vulnerable communities.

Since its foundation, Article 25 has become the first port of call for NGOs in need of construction, design and building management skills. They have been involved in over 50 projects in 22 countries, working in collaboration with communities and governments, to build better homes, schools and community buildings for those who need them. They deserve your support.

Another Article 25 event involved the architect Sandra Piesik who has spent many years documenting the vernacular palm-leaf architecture of the United Arab Emirates. An exhibition documenting her study is on show at the Royal Geographical Society until the end of the month. Her sumptuous book is available from Thames & Hudson.

With the help of Article-25 volunteers and students, Sandra supervised the building of  and Arish palm-leaf house in the gardens of the RGS. A palm-leaf sculpture made by the firm Burro Happold is also on display. See full account here:

Date palm trees have a deep-seated connection with Islamic culture and have traditionally not only provided dates but also building material. The oldest such palm-leaf structures in the Emirates date back 7,000 years. Now virtually none remain.

According to Sandra Piesik: ‘The world ‘Arish’ derives from the Arabic ‘al-reesha’ meaning ‘a feather’ as palm leaves look like feathers, particularly when joined together.’ She records that, in the UAE, the term Arish is applied to summer houses; winter houses are known as khaimahs. Arish houses are distinctive from region to region; in the northern Emirates the word is spelt Areesh. 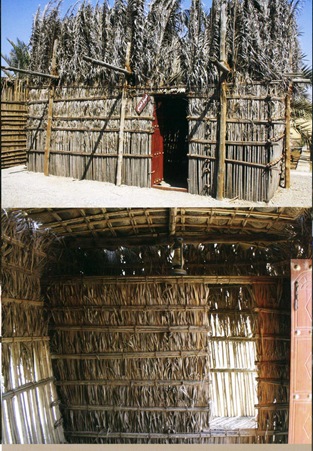 ARISH CAYADY: ‘A summer house for one family, built by the whole family (including the children). It is 5.6m long, 2.8m wide and 4m high. It has one door and no windows. The walls are made of untrimmed palm leaves, stacked vertically, held together and strengthened by five horizontal connections of fronds, inside and outside, tied together with rope. The roof is a frond frame covered with woven palm mats.’ – Sandra Piesik

Sandra Piesik’s book documents all aspects of what is known of the Arish vernacular tradition. This has been pieced together from archaeological and photographic evidence – including the photos taken back in the 1940s by Wilfred Thesiger. She criss-crossed all regions of the Emirates, tracking down some of the last craftsmen and builders from the tradition.

Her ultimate aim is two-fold: to establish a substantial archive of palm-leaf building history and techniques and, equally importantly, to try and revive this form of construction in the modern world. When you consider that the UAE has 42 million date palms which, every year, have to be trimmed of their fronds after the date harvest, you get some idea of the potential amount of construction material that is currently going to waste.

The book shows various reconstruction projects and some fine examples of Arish work from different regions. Dried palm leaves are made into mats, screens and roofs, tied together with rope made of twisted palm tree fibre. Palm tree trunks provide structure and support. The craftsmanship is beautiful and the results elegant and highly practical. Such structures’ primary function is to provide cooling shade in conditions where the average outside temperature can reach more than 50 degrees C.

The modest Arish structures provide a powerful symbolic counterpoint to the giant towers of modern-day Bahrein. Can traditional palm-leaf architecture be adapted and developed  for the modern world? Is palm-leaf, like bamboo, one of the new building materials for a climate-change future?

This seminal vernacular monograph is a classic work, documenting a vital project of contemporary relevance. 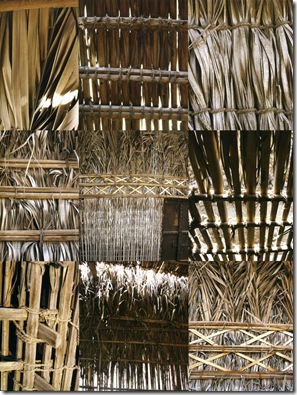