EARTHED: THE NEW AGE OF WOOD 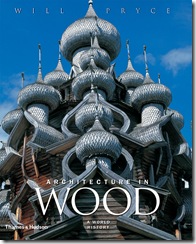 Back in 2006, when I was Editor-in-Chief of Tree News  magazine [SEE PREVIOUS POST], we ran a feature on this beautiful book  ‘Architecture in Wood: A World History’ by photographer and author Will Pryce. The interview I did with him seems quite prescient in the light of recent developments. [SEE NEXT POST: TALL WOOD BUILDINGS] 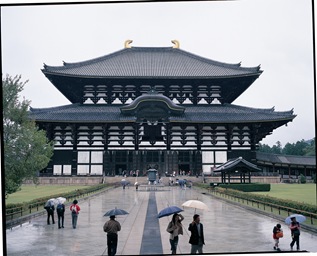 The Great Buddha Hall (the Daibutsuden) in Nara, Japan, was burnt down in the twelfth and sixteenth centuries. Although now only two-thirds its original size, it is still the largest wooden building in the world.

John May: You make the interesting point in your book that when the modernists arrived with their concrete and steel in the early 20th century, wooden buildings were deemed to be old-fashioned. Many were lost as result along with the skills used to make them – the ending of a historical age in which wooden buildings were dominant.
Will Pryce: If you look at the rise of modernism and corporate architecture in the United States and Communism on the other side of the Iron Curtain, both political systems had very little conscious interest in historical architecture. This was very much part of the obsession with the progressive, with the zeitgeist, with the idea that architecture should reflect the times and ideologies of the day. Everything which was progressive was also anti-historical; wooden architecture was despised for that reason.
For instance, right across eastern Europe from Bulgaria to Russia, the proletariat had traditionally built their own wooden houses, on the hillsides and in the villages. This every-man-for-himself style of architecture obviously didn’t suit the communist ethos and was considered bourgeois. Instead, mass housing was perceived as being truly proletarian and as having the right iconography for the revolution.
Of course, in a climate which has brutal winters, wooden architecture had traditionally been very successful in providing an insulated home that you could construct yourself relatively cheaply, but this huge tradition, which had gone on for hundreds of years, was effectively shelved and instead you got the ugly housing schemes of the fifties, sixties and seventies. 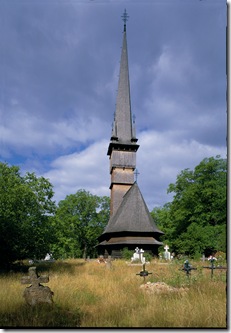 The tallest oak building in the world, the Church of the Holy Archangels at Surdesti in Maramures, a remote region in the Carpathian mountains in Romania. The population of Maramures developed an intensive woodworking culture and there are still towns and villages here entirely built from wood and some 800 extant wooden churches. Most have towers, a tradition dating from 1600 and culminating, in 1766, with the construction of this church, whose tower rises 54m (177ft).

The other thing about Eastern Europe was that farmers would build their own houses, merchants would build their own shops and stores. They would have axes and they would have the essential skills passed down from father to son. The same in Scandinavia: farmers built their own buildings. These were not professional architects.
JM: Do you see a serious shift taking place within the architectural community towards using wood in buildings to a much greater extent.
WP: I do think there is – and in lots of different countries. In Japan there’s a big move back to the Japanese wood tradition. Certainly in France and Germany there’s a lot more wooden architecture, and in Britain it’s becoming much more popular.
A very good example is Richard Rogers, architect of the Pompidou Centre and Lloyds of London, both extraordinary modernist buildings in steel and concrete, who has just built a school in wood — something that nobody could possibly have imagined 20 or 30 years ago. He’s also used wood heavily in his scheme for a new airport in Madrid and for the new parliament building in Wales.
Technical improvements in the building trade have affected wooden products as much as any other product and there’s now a huge range of different styles of using wood. For instance, you can use it effectively as the equivalent of steel I-beams and you can now also span very, very large structures with wood using glued laminates. 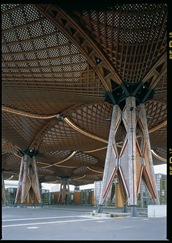 Thomas Herzog’s 16,000sq m (172,000sq ft) timber canopy for the Expo 2000 in Hanover, Germany, floats 26m (85ft) above the ground and demonstrates the power and possibilities of modern wood products in architecture.

Pretty much all of traditional wooden architecture uses some version of a framing system or a log jointing system in which you’re basically using a long thin thing, either vertically or horizontally. The new products and procedures we have now open up the possibilities of a wooden architecture that is far more about planes and less about traditional frames. You’re freed up to use a much more varied spatial palette when you can use an entire plane as a structural entity.
I think one of the central myths people have about wooden architecture is the assumption that it’s just going to burn down and therefore it’s fundamentally less of a permanent building material than steel, for example.
Like all building materials, steel has a fire rating based on how much time you’ve got to vacate the building before the steel structure gives up on you. So let’s not assume that a steel building has better fire protection; it only has a fire rating like a wooden building.
Skyscrapers will have a life of maybe 250 years but there’s no reason why oak frames can’t last a thousand years easily. No steel building will last a thousand years partly because the buildings are not now designed with those long life-spans in mind unfortunately.
We not only need to recognize that architecture isn’t permanent but also that it has an environmental cost. This means that when we construct it, we need to think about which bits we will need to replace when and what happens when we take it apart.
A good example of this is the work of the Australian architect Richard Leplastrier who chooses, if he possibly can, to reuse wood that has been reclaimed from other buildings rather than fresh timber, and to design all his details so they can, in turn, be taken apart and used in any other form of architecture.
I think it would be a mistake to assume that wood should only be used in its absolutely purest form. However imperfect it may be, from an environmental point of view, to use a process like glue lamination and products like MDF, they are still hugely greener than the environmental impact of aluminium or steel. It’s so much better to be using the wood in the first place. 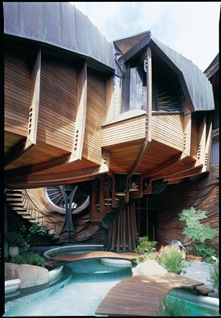 The central courtyard of the Price Residence in Corona del Mar, California, a truly bizarre and original work in wood, designed for Joe Price, one of the most remarkable architectural clients of the twentieth century, who commissioned several buildings by Frank Lloyd Wright. Occupying what appears to be a nondescript suburban cul-de-sac, it backs onto cliffs in a spectacular setting overlooking the Pacific.

JM: We’re at this interesting historical point now where we are returning to wood for completely different reasons.

WP: We finally recognise that we’ve got an impending environmental catastrophe on our hands. If we think about it thoroughly then using wood, which is also obviously a carbon store, could be a really practical and beneficial way of building a more sensible long term sustainable form of architecture. Wood is the only sensible solution for, certainly, private dwellings if not other buildings types as well.
JM: Are current building regulations in the UK an impediment to the development of wood in architecture?
WP: One of the problems we have is that our planning principles are based around superficial terms to do with the general appearance of the building. A steel or concrete structure with a warm layer of brick on the outside of the most mundane variety is more likely to get planning than a building made of wood which looks radically different. There is a prejudice against anything which doesn’t seem to suit the milieu, and the milieu isn’t wood. There hasn’t being a wooden milieu in London since the seventeenth century, but there are wooden buildings being built in London.
JM: A lot of people are looking at the mass fabrication of buildings and developing various kinds of kit houses. As we obviously need more mass housing does wood offer an opportunity?
WP: It completely does. The building industry has been happily and quietly been using wood for roof beams in mass housing for a long time. What’s much rarer are buildings whose wooden character is made explicit on the outside.  Wooden buildings can now be prefabricated, flat-packed and assembled very successfully and very cheaply and there’s a real possibility for an interesting economic architecture using wood.
Architecture In Wood: A World History by Will Pryce is published by Thames & Hudson