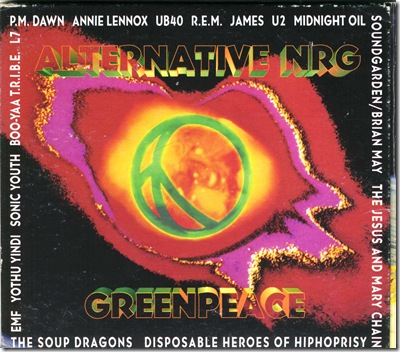 Here are the sleeve notes for the Greenpeace 'Alternative NRG' album, written on 9th May 1993. People think that discussions of green technology and awareness of  climate change are new developments. Think again.

It was sometime in the late 1980s when climate change
began to take hold. The Cold War was over but the planet
was heating up. The human race was slow to react
because the change was barely noticeable to begin
with.....

Smell of burning jungles and scorched grass in the air...images of black oil stains on white sands., of sea otters licking oily clots from their fur...the toxic bouquet of a thousand exhaust pipes... .the cry of a baby trying to breathe in the choking smog of Mexico City....the coal-dusted faces of street kids in Romania... the heat signatures of a million apartment blocks leaking energy into the warm darkness....the frenzied click of geiger counters recording the invisible traces of radiation from crumbling nuclear reactors, held together with cigarettes, alcohol and hefty tax subsidies....bleached, silent forests and clean, dear, beautiful dead acid lakes..

What's a little bit of global warming between friends ? Heat-flows drive the ocean currents, the winds, the waves, the storms, the floods, the droughts; powerful forces not to be messed with. If we can put a man on the moon why are we still grubbing in the ground for dirty energy...nuclear fusion, it's an illusion..nuclear power, can you think you think of a more complicated and dangerous way of boiling water?..coal, oil and gas are not running out but we can't afford to burn it. 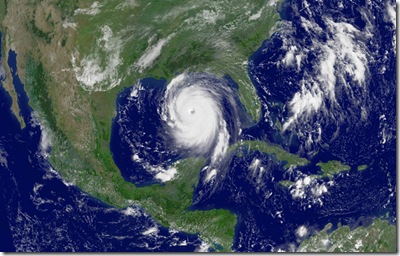 The first signs of climate change are already measurable and noticeable...there is no reason to delay urgent actions...only if people all across the world become aware of the danger that our planet is exposed to will we have a chance to ward off this global threat...we are about to witness climate change of a magnitude which been unprecedented in past millennia...there is a risk that world food supply will be severely compromised"

(Protecting the Earth's Atmosphere, a report from the Commission of the German Bundestag 1992) 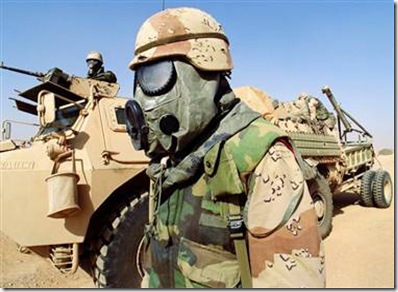 The inspiration for this album came out of the tragedy of the Gulf War, watching the planet burn as people died for the right to have smog....every addiction has its denial...cut to photomontage of oil well stuck in junkie's arm...the sky over Los Angeles is our testimony.

We are looking down from a low-orbital spacecraft at the night lights of the world....patterns of energy draining into the darkness...the ceaseless river of headlights... 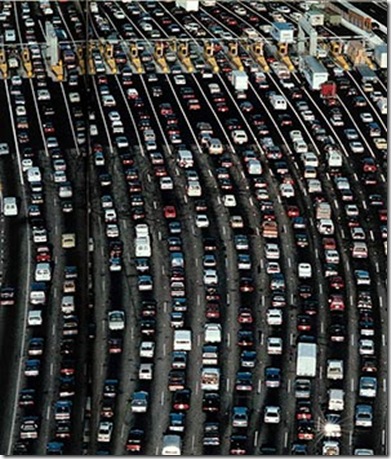 Kerouac's dream has become our nightmare...we are all on the road...cars, cars, cars, cars, cars...fender to fender, bumper to bumper...auto is a four-letter word...there are two kinds of population explosions going on....for every two babies born there is one car produced...what was once a convenience is now a choking prison....It all connects....Saudi Arabia...the internal combustion engine....the sticky fumes of black tarmac....burning tyre dumps.

Our lifestyles waste heat...burning coal to create electricity wastes two-thirds of the energy and generates climate destruction..everyone's responsible but some are more responsible than others...we call them politicians, we call them business leaders....we are driven by an interconnecting network of power-hungry crazies...our electric thirst is insatiable....Please can we change this movie.

You don't need a weatherman, just look out the window...stop it...do some thing... we've got to make a change..call a halt...find a better way....make that transition to the solar age...there's no such thing as a free light bulb....we are moving...moving towards the sunlight. 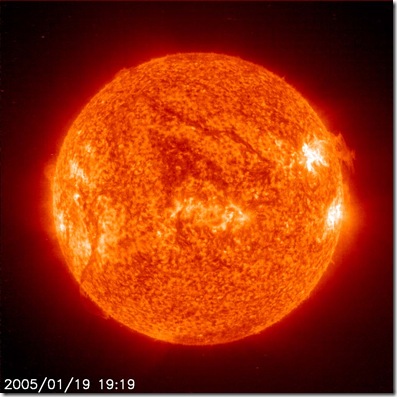 In less than forty minutes the US receives more energy in the form of sunlight than it does from the fossil fuels it burns in a year....one ton of sand for solar panels generates as much energy as 300,000 tonnes of oil.

There is an opportunity in the world now...for an energy for everyone world...we have the technology...we have an important reason.

There is a bright light in the future...a thermonuclear reactor 93 million miles distant from us....its energy brought you this music.

Clean energy is smaller and smarter, stylish and safer....E4E stands for Energy for Employment....jump-starting the clean energy economy...clean, green technologies for jobs and new economic growth...green for growth...the environment, the economy and the unemployed need action now....each day we wait, we lose.

Free your thinking...turn weapons into solar cells....convert aggression into progression...leave coal, oil and gas safely buried underground....save money and end pollution....ride the wave of the future....

A stiff breeze blows a line of 400 windsurfers into New York harbour in the first Greenpeace Art Action, their painted sails carrying a message of hope, of inspiration, creative thinking and clean energy, brought to you by the imagineers, the visionary pragmatists, the dream engineers, the Sol mates.

We can change things....Energy for Life...we can make a difference...turn on, tune in, go for the clean burn...we are moving...moving towards the sunlight..making the transition to the solar age...it will be a long march...but we will make it...the sun will rise...we know so much more now...but we have less time....

(with additional contributions from Andrew Kerr and Steve Kretzmann)

Wow, I have not read this in 20 years! Prescient indeed. It could be written today and still be relevant. I do love me some John May....