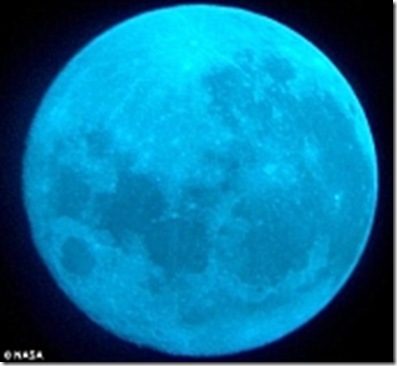 Above: One way to make a blue moon: use a blue filter. That's what Kostian Iftica did on July 2nd when he photographed this full moon rising over Brighton, Mass. [Source: NASA]

The end of the year, the end of a decade, signaled by a 'blue' moon on New Year's Eve. Or was it? Hereby hangs a tale.

If you read most of the popular pieces that appeared in the press over the last days, they assert that a 'blue moon' occurs when there are two moons in a calendar month; the 'blue moon' being the second.

According to the Winnipeg Free Press: 'It boils down to a matter of mathematics. We use lunar cycles to plot our calendar years. Most have 12 full moons -- one per month. Solar calendars and lunar calendars are not identical. Solar calendars have roughly 11 more days. Because the extra days carry over, eventually there is an extra full moon every two or three years.'

According to 'A blue moon to end the year' by Judy Siegel-Itzkovich [Jerusalem Post 31st December 2009]: '...blue moons occur - on average - every 2.7 years, according to astronomers. The next one will be in August 2012. Blue moons occur when the solar and lunar calendars don't correspond, as a year in the Gregorian calendar has about 11 more days than it would if every month were a lunar month of 29.5 days.

So far, so good? Actually, no!

Back in 1993, folklorist Philip Hiscock of the MUN Folklore & Language Archive at the Memorial University of Newfoundland, published his findings into the 'Folklore of the "Blue Moon."

The moon is a popular subject in folklore history and both monthly and seasonal moons were given names (Harvest and Hunter being two examples). Most almanacs list 12. But "blue moons" are different as they are not restricted to a time of year. Hiscock set out to find the origin of the term - and the connected phrase 'once in a blue moon.'

1 and 2: Hiscock writes: 'Four hundred years ago, if someone said, "He would argue the moon was blue," the average sixteenth century man would take it the way we understand, "He'd argue that black is white." This understanding of a blue moon being absurd (the first meaning) led eventually to a second meaning, that of "never."

According to Once in a New Year's Eve Blue Moon by Cristine Russell [The Atlantic  magazine. 31st December 2009] the earliest known reference in print referring to a "blue moon" 'comes from a 1528 work entitled the 'Treatyse of the Buryall of the Masse' by William Barlow, the Bishop of Chichester, which includes the following reference.

"Yf they saye the mone is belewe,

We mus beleve that it is true"

3. The third meaning refers to the fact that, occasionally, the moon does actually appear to blue. This, we now know, is due to the atmospheric effect of volcanic eruptions or forest fires.

According to NASA: 'The key to a blue moon is having in the air lots of particles slightly wider than the wavelength of red light (0.7 micron)--and no other sizes present. This is rare, but volcanoes sometimes spit out such clouds, as do forest fires'

This happened after the explosion  of the Indonesian volcano Krakatoa in 1883, which produced blue moons and green sunsets for some two years. It also occurred in 1951 as a result of  huge forest fires in Canada and Sweden. 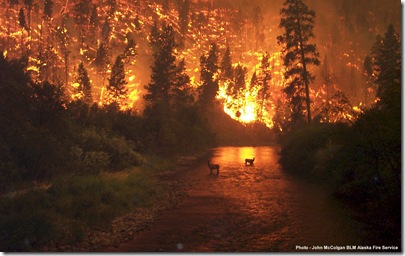 4. Hiscock writes: 'Even by the mid-nineteenth century it was clear that although visually blue moons were rare, they did happen from time to time. So the phrase "once in a blue moon" came about. It meant then exactly what it means today--that an event was fairly infrequent, but not quite regular enough to pinpoint.'

5. Hiscock's fifth meaning is taken from popular songs in which the "blue moon" is a symbol of sadness and loneliness.

6. This sixth meaning, and the most recent, is that a "blue moon" is the second full moon in a month, which is where this piece started out.

Hiscock writes that he first became aware of this new definition in May 1988, a month with two full moons, when he was fielding media calls regarding this bit of "old folklore."

As a result, he searched high and low for references to this, or to other terms to describe two moons in a calendar month. He consulted with other folklorists worldwide but with no success. He writes: "Blue moon" seemed to be a truly modern piece of folklore, masquerading as something old.'

Eventually he did track it down, via a question in 'Trivial Pursuit'. The TM records showed that the fact came from a 1985 children's book called 'Kids' World Almanac of Record and Facts' [World Almanac Publications. NY. 1985]. Where the authors got it from, no-one seemed to know.

Further research by Hiscock and others, has suggested that their most likely source  was a US radio programme called 'Star Date', featuring Deborah Byrd, which was broadcast on 31st January 1980.

From here, the trail led to an astronomical magazine 'Sky & Telescope' - the source of the original error.

In a detailed modern article in the same magazine on this topic -  'What's a Blue Moon' by Roger W. Sinnott et al - the authors report that they found Byrd's original program script, which confirms, in a footnote (never read out), that the source for the information was a 1946 article in S&T by amateur astronomer James Hugh Pruett.

Pruett in turn, refers back to an earlier Q&A column in S&T (June 1943) in which one Laurence J. Lafleur discusses blue moons and cites the 1937 Maine Farmers Almanac as his source. [This did list "blue moons", and defined them in a complicated way (which Sinott et al explain in detail). In the Almanac's view, when a season contains four full moons, the third is called a Blue Moon.]

Pruett repeated Lafleur's comments but, not having the Almanac, he misinterpreted their findings, writing: 'Seven times in 109 years there were - and still are - 13 full moons in a year. This gives 11 months with one full moon each and one with two. The second one in a month, so I interpret it, was called Blue Moon.'

This then is the long track that led to this 'fact' entering the mainstream media. Its an interesting case study.

Hiscock concluded: "Old folklore" it is not but real folklore it is.'

Sources: The full version of Philip Hiscock's article 'Folklore of the "Blue Moon" can be found on the International Planetarium site.  He later wrote another version entitled 'Once in a Blue Moon' which appeared in Sky & Telescope.