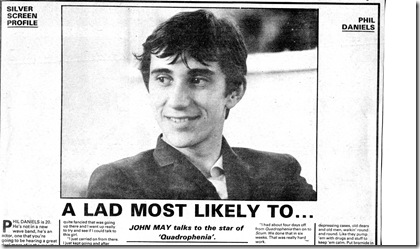 The original piece in the 'Silver Screen' film section of the NME. I'm pretty sure the photo was taken by Pennie Smith, although she is not credited. This is one of the few pieces that appeared in the paper under my own name rather than my pen name Dick Tracy

This follow-up piece was printed in the NME on the 29th September 1979. I think it was the first (certainly one of the first) interviews he had done. I took the decision to run the piece in his own words, which I'm not sure he liked.

PHIL DANIELS is 20. He's not in a new wave band, he's an actor, one that you're going to be hearing a great deal more of in the months to come.

After serving his apprenticeship in 45 television dramas and a number of stage parts, Phil has now hit the big screen. He plays a bugler in Zulu Dawn, a "sex maniac, educationally sub-normal mongrel" in The Class of Miss MacMichael and, more importantly, stars as Jimmy in Quadrophenia and as Richards in the movie version of the banned TV play Scum. 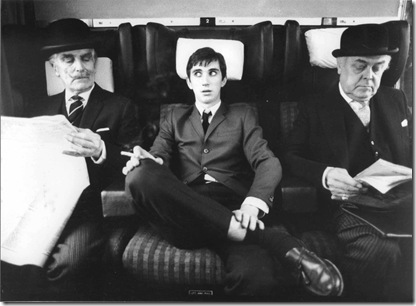 The prospect of celluloid fame concerns him but his attitude should see him through. He's cocky, sharp and wants to keep working, to be a really good actor.

This is Phil Daniels, in his own words.

“When I was fourteen, nothin' to do, a theatre workshop called Amateur Children's Theatre came to King's Cross where I lived and done theatre workshop. There was a girl I quite fancied that was going up there and I went up really to try and see if I could talk to this girl.

"I just carried on from there. I just kept going and after about four weeks the BBC needed some gnomes and little things for Falstaff and I got a part. I still weren't interested in bein' an actor that much but I thought it was good anyway. Then all of a sudden I kept landing parts and just carried on.

"My agent got me an audition for Quadrophenia and I went down there. I'd just come back from South Africa, I done a film there (Zulu Dawn), and I caught something out there and my tongue split in half and went yellow and I couldn't eat for a week, only drink fluid. I dunno what it was but antibiotics cured it.

"I went about four days after I come back and being out in Zululand and, you know, comin' back and being a Mod. Put on a pair of cord trousers, football shirt. Didn't know what was happening and like I see Franc (Roddam) and I knew that it weren't on. I thought 'I've really blown this'.

"We started in Brighton, did the end first. We just got all of us there and they said 'Listen, in '64 these cats came down to Brighton and there was a riot here", and the boys were going 'Yeah, yeah, riot. Yeah, 'course there is, 'course there's a riot", and we just started walking down the promenade, started singing and stuff, and then we just wreck the place really. But it wasn't terrifying 'cos I was a Mod. It was like a newsfilm doin' it but it didn't get too hairy."

"I had a really interesting talk to Roger Daltrey one day on the beach in Brighton. He's sayin' there's a Jimmy in all of us, we're all Jimmy in a way. Like if you come out of that Mod era, that mum and dad number, you know, the music's too loud.

"So that's how I try to play it, like a typical kid. In the film he's an anti-hero. You've got to have that focal point but I try and make him a bit of a wanker as well. 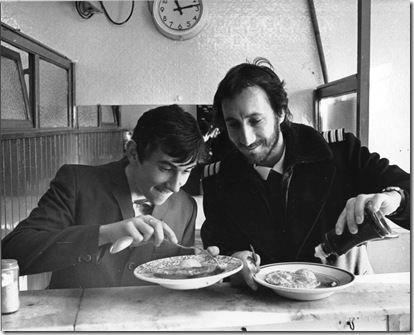 "Townshend came down one morning to the Pie and Mash Shop while we were filmin', just for publicity I think, press and stuff, but I go mad. I see Townshend there, I think to myself, What! What! Pete Townshend he’s brilliant, brilliant.

Yeah, I done background stuff. Like I went and saw some old Mods all around London. A guy called Tommy Shelley, like he's a bit of a famous old Mod and he gives me a lot of clues about the style of the guys. Things like how to ride your scooter and how you are with women.

"I see some old footage of Mods but I thought meself, like from my past, it's just the same thing. All my mates were sort of Mods, but they just haven't got the thing of saying they're a Mod.

"Really I'm an actor you see and I'll do anything, but I feel a bit Mod. It's a good look.

"I don't think the Mods are the same now as they were. Then you was a Mod 'cos that's what happened, now it's just a trend. I think if you're a Mod you can only be a Mod for so long, you can never be a Mod forever, because in the end I think you realise you're as much a part of the system as anything else. Bein' a Mod, it's like bein' in the army. You know, he's a Mod, he's a Rocker. I don't like that. I rather people get on with people whoever they are

"I had about four days off from Quadrophenia then on to Scum. We done that in six weeks. That was really hard work.

"I play this guy "Stripey" Richards. He was me background, I reckon. He was always bein' done for fighting and he striped a bloke in a fight and got put away. But I think he'd been put away about three times before so he's used to it.

"He and another guy called Pongo Banks run the borstal, the Daddy. When people come in for visits they give their sons money, we take the money off them and give it to the screws and we get a percentage, and like if anybody's out of order, the screws will just tell us and we'll keep them in order.

"There's a new guy comes called Carlin and we're told to keep 'im in order cause he's hit an officer in another borstal. We give 'im a good going-over but slowly he gets us back, one by one, until he's the Daddy.

"We filmed it at Shenley, where government and things send old people to die slowly. They got these little villas in the grounds and there's like a circuit you keep walkin' round and round all day long. You can see these really depressing cases, old dears and old men, walkin' round and round. Like they pump 'em with drugs and stuff to keep 'em calm. Put bromide in their dinner so they can't get the horn.

"It's a terrible scene, borstal for a kid, 'cause you never will ever learn trust, you never regain that. If you're put in an institution you can't come out and just live a normal life again. But you gotta go down to the root of the problem I suppose, 'bout doin' things in the first place.

"I think the film takes a stand of just showing you incidents that definitely happen in borstal and I think it's pretty true to life, in my estimation. If you're doin' something about borstal, you can't talk like Laurence Olivier. Like the guys who played the screws, they got into it I tell you. Blimey, some of them slappings we got, they tingled a bit.

"I like actors in roles. I do like de Niro very much. Mean Streets is a brilliant film. Him I like. Dirk Bogarde, I really rate him.

"What I want to do now I've sorted me head out a bit, I just want to do things that I think are good, morally good — not talkin' bout fuckin' morals — but things that are spot on about right things."