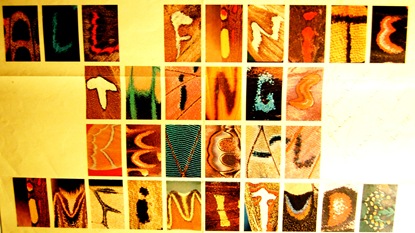 This is one of the great things about the Archive. Unearthing lost treasures. This image is not faithful to the real colours. Just a photo for present. Will replace with a proper scan.

This was a giveaway from the Smithsonian magazine which I was sent (I believe) by the photographer Kjell Sandved, who inscribed it with a personal dedication to me, his signature and the date - August 1981.

There is text underneath. The headline reads: Look - and then look more closely. Text as follows:

'To reproduce the line above from American poet Theodore Rothke's 'The Far Field' required innumerable experiments over eons of time. For each letter has been etched into the wing of a butterfly through a never-ending series of trials and errors known as natural selection. No one knew the letters could be found there in the wings until Kjell Sandved, staff photographer for the Smithsonian's National Museum of Natural History, perceived  them. Imagine then, what else there is to be seen in the wing of a moth, or the water above a sunken tree, or in the memory of a single person.' 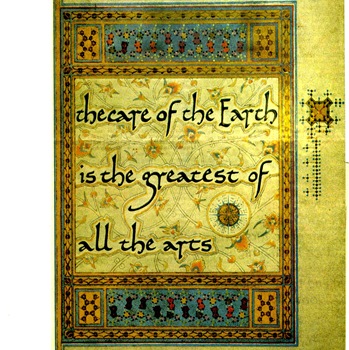 This was the illustration for the obituary (The Guardian 1 Sept 2005) of Patrick Furse, a master of enamelling and, by all accounts, a wonderful teacher. The caption reads: 'Social conscience'....the design of this piece, with a conservation theme, incorporates molecules of DNA and silicone.