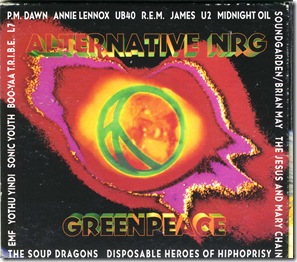 Some years later, in the early 1990s, I was involved with the 'Alternative NRG' album project which was organised by Dave Wakeling (formerly of The Beat) and Kate Karam who were, by this time, running Greenpeace Records out of Los Angeles. I wrote the sleevenotes for the album [see Next Post]  and a piece about the project for The Independent [13 Jan 1994], reproduced below: 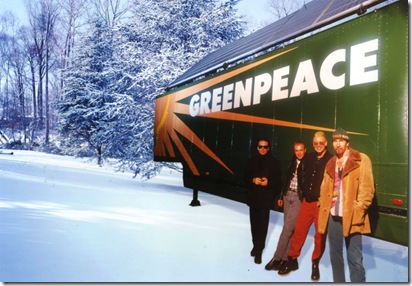 It's kiss of death territory. A new benefit album; com­passion fatigue time. But this one's about solar power.

Alternative NRG is a 16-track compilation of live per­formances, all recorded using a solar-powered generator. Dave Wakeling — formerly with The Beat — is the co-ex­ecutive producer and creative director of Greenpeace Records. On the telephone from Los Angeles he claims that this record "walks the walk and talks the talk".

As he and Kate Karam, president of Greenpeace Records, remember it, the idea began in a bar after long hours carrying protest plac­ards during the Gulf war. Sev­eral martinis later the idea of producing a solar-powered record had taken shape. The point was to show that solar energy was not a failed Sev­enties experiment but had real value in a world still fighting over oil resources. Or, as Dave puts it: "We fig­ured that if we could get a bomb down the chimney of a kid's bedroom in Baghdad, you should be able to get from your house to the supermar­ket without ruining the sky."

The starting point was Kate's memory of a picture of a small mobile generator she had seen on someone's wall n 1984. Building the same thing on a large scale was another matter. Wakeling and Karam were worried about having to deal with "real black hats", in Karam's phrase: many of the compa­nies that manufacture solar cells and panels are also heavily involved with the nuclear industry. In the end, they reconciled themselves to this with the thought that they would be helping these corporations to make the transition to environmentally friendly technology.

Then they had to find somebody who knew how to build their dream machine. They came up with Jim Da­vis, who had built solar power systems for the houses of Jackson Browne and Bonnie Raitt. He teamed up with a man who had been involved with customising vehicles for the military to convert a 28ft aluminium trailer into a mo­bile solar power station.

Mounted on its roof is a 1,920 watt, 16sq ft solar panel array, which can be hydraulically tilted to track the sun. The power it produces is stored in two 48V sealed, long-life batteries which use oxygen recombinant technol­ogy and are designed to be maintenance free. These par­ticular batteries had previ­ously been used to power the Greenpeace base in Antarc­tica. The whole rig is pulled by diesel tractor converted to run on a range of biofuels.

The first test for the sys­tem came in Phoenix, Ari­zona, at a Sonic Youth gig. It was 110F inside the generator, everyone was boiling and ner­vous, but the whole system did the business. Not only that, it was so hot that the venue had a brown-out: the Greenpeace solar generator — named Cyrus after the Persian for sun — powered the whole venue for the rest of the night. 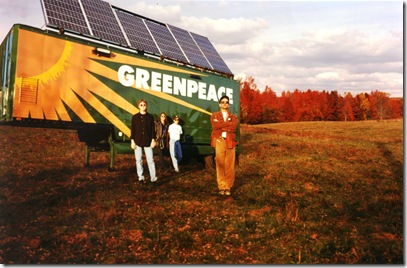 The album contains REM's only live performance in 1993, a charged version of "Drive" recorded specially for Greenpeace at a small night-club in Athens, Geor­gia, at a party for family and friends. Michael Stipe was in­trigued by the fact that they were using "local sunlight", as he put it, to capture the music. 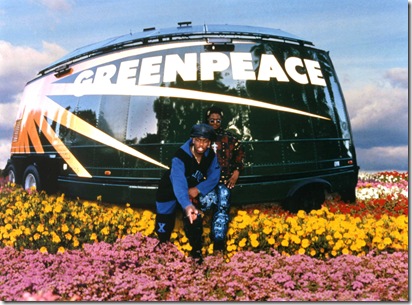 There's also a great version of "Looking Through Patient Eyes" by P M Dawn, a song that was No 1 in America for a couple of months. This was, in Wakeling's words, "where hi-tech ecology met a huge tribal stomp" — at the Aids Danceathon, held in the Los Angeles Sports Arena in front of a crowd of 10,000 people who had been dancing for nine hours.

U2 were recorded live at the Jack Murphy Stadium in San Diego, playing "Until the End of the World". This was the most challenging situa­tion for the generating truck, because of the huge power re­quirements and the 14 hours it took to set everything up, but Cyrus never missed a beat.

Other treats include James with "Ring the Bells", Mid­night Oil's "Tell The Truth", Boo-Yaa Tribe with "Fam Bam", Soundgarden and Brian May on "New Dam-age" and tracks from Annie Lennox, UB40, Disposable Heroes of Hiphoprisy, the Soup Dragons, EMF, Yothu Yindi, Jesus and Mary Chain and L7.

The producer, incidentally, is Robert Margouleff, for­merly 50 per cent of Tonto's Expanding Head Band, and now established as a top live recording maestro, with the technical ability to master the gizmos and the psychological skills to bring out the best in a band's performance, to make them believe that their song will make a difference.

Not included is a track re­corded with Pearl Jam at George Lucas's Skywalker Ranch, called "Better Man". Originally, it was hoped that Chrissie Hynde would record the vocals, but that never happened. The eventual re­lease date was too close to the date of Pearl Jam's own new album for their label to allow the track to appear.

But in general, over-de­mand is making it harder and harder to get benefit albums made. Some labels now refuse to allow their artists to participate in benefits be­cause they're sick of giving away rights and royalties; Warner Brothers only allows its artists to do a benefit once a year. The Greenpeace al­bum is out on Hollywood Records, owned by Disney, which is keeping a sharp eye on the proceedings and ex­pect it to turn a profit .That's up to you.

'Alternative NRG' was re­leased on Hollywood Records (distributed by BMG) on 31 January 1995.

Great story, although a bit inaccurate. The most effective way to promote solar energy is to be factual about its capabilities. Over stating performance will only erode credibility.

Cyrus wss built in a "recycled" trailer. It was originally 40' long, but after an accident that damaged the rear, was shortened to 28'. Another 3 feet was taken off the roof to accomodate the solar panel.

The inverter was good for 10 KW and produced a very pure sine way signal, perfect for powering the recording truck...the only thing it provided power to. 10KW is barely enough to power a large home, nowhere near enough to "power the whole venue". The battery pack was something like 20 or 25 batteries, not 2. Two batterries would support the system for a very short time.

Solar power has a great deal of viablity, given the proper application. Leaving people with the impression that a small system such as this one with "two" batteries would "power a venue", only acts to discredit those who are trying to advance the use of the technology and is counter to the intent of this Greenpeace demonstration program. Over statement only leads to over disappointment. Education is the key to the acceptance of the solar alternative, not unfounded hype.

I'm the "man" who built Cyrus...could have found my name along with Dave, Kate, and Jim on the sleevenotes.

It was a really fun project. Got me involved in the "Solar" world. Seeing it work for the first time at the Sonic Youth concert was really cool.