THE BOOK OF BLOGS 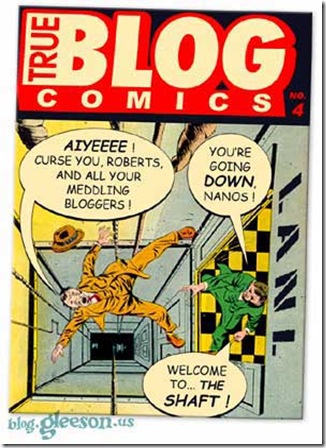 'A March 2008 study by Universal McCann found that 184 million people worldwide had started a blog, with 26.4 million in the United States—roughly one out of ten of the adult population. Among eighteen-to-thirty-four-year-old Americans, 20 percent pub­lished blogs. And 77 percent of active Internet users worldwide read blogs.

'Technorati's most recent report on the blogosphere, from Septem­ber 2008, reports 133 million total blogs indexed by the service since 2002. Only some fraction of those are still active—7.4 million of those blogs had posts within the four months previous to the survey—but that's still enough bloggers to produce close to a million posts a day. The numbers are controversial for the usual reasons (questions over method­ology, disagreements about definitions, and so on). Even counted conser­vatively, they are staggering—particularly when you consider that, a decade before, the word blog did not exist, and you could count the total number of weblogs on your fingers and toes.'

[See: Technorati's 2009 Report State of the Blogosphere.  A useful summary of some of the key findings can be found on Online Journalism Blog] 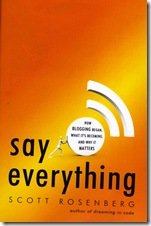 'Say Everything' is an engaging history of blogging by a former editor of Salon magazine, which  I have munched my way through during my morning visits to the coffee-shop. Scott Rosenberg has an easy chatty style, has been in the online media business for years and runs his own blog WordYard.

Part One concerns the pioneers and proto-pioneers of the blog. He sketches in some of this in the Introduction but in this section, in three chapters, he profiles Justin Hall of  'Justin's Links', Dave Winer of 'Scripting News' and John Barger of 'Robot Wisdom' (who coined the term 'WebLog').

Part Two, entitled 'Scaling Up' (5 chapters) profiles the story of Blogger, The Rise of Political Blogging, Blogging for Bucks, the story of Boing Boing and in 'The perils of Keeping It Real', various bloggers whose desire to reveal all have got them into trouble.

Part Three is called 'What Have Blogs Wrought'  and contains 3 chapters  - 'Journalism vs Bloggers' (of which more anon),  'When Everyone Has  A Blog' ( the blog explosion and its effects), 'Fragments for the Future' (has blogging peaked, where is it heading) - and an Epilogue entitled 'Twilight of the Cynics' (blogging is great).

From a Brit perspective, the book is very US-centric. There is very little at all about bloggers elsewhere, for instance in Iran and China, where blogging is often a matter of life and death, rather than a hobby or a diversion. It is very centred on 'geek history' and, while I read it all, there was much too much detail in many of these profiles for my taste. Neverthless and overall, I enjoyed the experience and found the book informative and entertaining. 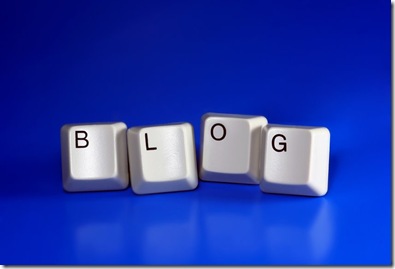 My favourite chapter was Journalism vs Bloggers (hardly surprising). In the beginning, the journalists largely ignored this development and viewed it with, what Rosenberg calls 'detached interest.' But this soon turned, he says, to 'active belittlement'  until, that is, the mainstream media itself  embraced blogging. As newspapers and magazines have declined many journalists are losing their jobs and an increasing number have become bloggers. The tone of the debate has changed, centering on such concerns as  the threat blogs pose to  'objective journalism' to 'investigative journalism' and to 'the single national narrative', which is being replaced by 'millions of disparate narratives.' I love Rosenberg's closing remarks on this:

'Whatever the drawbacks and limitations of blogging, it serves, today, as our culture's indispensable public square.  Rather than one tidy "unifying narrative," it provides a noisy arena, open to everyone, for the collective working out of old conflicts and new ideas. As the profession of journalism tried to rescue itself from the wreckage of print and rethink its digital future, this is where its more knowledgeable practitioners and most creative students are doing their hardest thinking.'

Rosenberg mentions three web sites which follow this debate, which I thought I'd check out.

Recovering Journalist' by Mark Potts has a very interesting latest post on  Apple's Tabula Rasa. He believes it could effect the whole media industry in a major way.

Martin Langeveld's News after Newspapers has a great story about a major investigative website California Watch.  Langeveld is now one of a group of people blogging at The Nieman Journalism Lab, a collaborative attempt to figure out how quality journalism can survive and thrive in the Internet age. In one story 'Print is Still King', he reports that

'Surprise. All generally accepted truths notwithstanding, more than 96 percent of newspaper reading is still done in the print editions, and the online share of the newspaper audience attention is only a bit more than 3 percent. That’s my conclusion after I got out my spreadsheets and calculator  again to check the math behind the assumption that the audience for news has shifted from print to the Web in a big way.'

Alan D. Mutter's Reflections of A Newsosaur contains a story How long can print newspapers last? The piece begins 'Actuarially speaking, the population of print newspaper readers will drop by nearly a third within 15 years and probably be less than half the size it is today by the time 2040 rolls around.'

There was an excellent piece I read last year 'The News About The Internet' by Michael Massing in The New York Review of Books,  which is also worth reading. He writes: 'The practice of journalism ...is being reinvented [by the Web], with a variety of fascinating experiments in the gathering, presentation, and delivery of news.'

In 'The State of The News Media' , the 2009 Report from The Pew Institute, they highlight Major Trends, which includes the following:

'Power is shifting to the individual journalist and away, by degrees, from journalistic institutions. The trend is still forming and its potential is uncertain but the signs are clear. Through search,      e-mail, blogs, social media and more, consumers are gravitating to the work of individual writers and voices, and away somewhat from institutional brand.'

THE GENERALIST is taking notes.