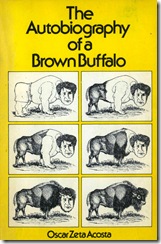 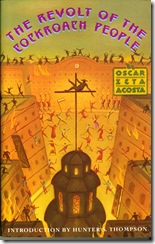 Above: (Left) Rare copy of ‘The Autobiography of a Brown Buffalo. Published in the UK by Charisma Books in 1974 [The Generalist Archive]; (Right): American paperback edition of ‘The Revenge of the Cockroach People.’

This post begins with an anecdote. The date and location remain to be verified. I think it was in the 80s. The location was a pub in London’s Covent Garden. It was early evening and I was in the company of the editor of a London magazine who was about to rendevous with Hunter S. Thompson. I excitedly tagged along. Hunter was being paid in coke and the editor was there to deliver.

We entered the bar and their stood Hunter, larger than life, is his bushwacker hat and classic outfit. we said hello briefly and then the Ed and HST headed for the john. Sometime later they were back and there I was, standing next to the Man. We chatted for 10 mins max. My first question, how is Oscar Zeta Acosta these days ?

I figured this was a good bet as not too many people even knew who OZA was let alone read his excellent book ‘The Autobiography of a Brown Buffalo’. It certainly broke the ice. 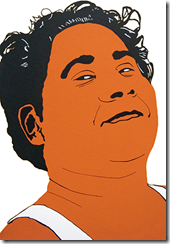 The story goes as follows. Oscar Zeta Acosta was the model for the attorney in ‘Fear and Loathing in Las Vegas’, portrayed in the two movie versions of the story by Peter Boyle and Benito del Toro.

HST met OZA for the first time in 1967 at a time when Acosta was working as an attorney in Berkeley, California. Four years later he figured large in ‘Strange Rumblings in Aztlan’ a memorable lengthy journalistic piece by HST which was published in Rolling Stone magazine. 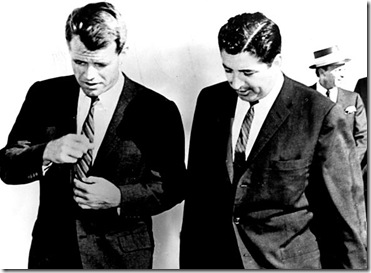 The piece was written in the wake of the death of Ruben Salazar, a nationally known Mexican-American reporter for the  Los Angeles Times. On Aug. 29, 1970, during a protest against the Vietnam war, Salazar was killed when a tear gas canister fired by a sheriff's deputy hit him in the head. He was 42.. 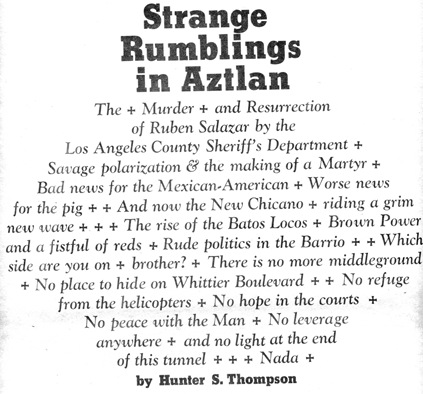 Source: Scan of text above and photo below from original copy of Issue 81 of Rolling Stone, published April 29th 1971 [The Generalist Archive] 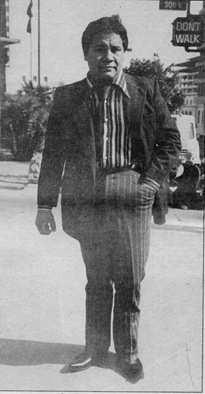 OZA was working at that time as an activist attorney for the  Chicano movement in the barrios of East Los Angeles. While working on the piece, the two of them made the trip to Las Vegas that forms the basis of ‘Fear and Loathing.’

The extraordinary story of the ‘brown power’ movement is recounted in OZA’s second book ‘The Revenge of the Cockroach People’ which i just found in a second-hand bookstore – the trigger for this post. In the intro, HST memorably describes him as follows:

‘Oscar was one of God’s own prototypes – a high-powered mutant of some kind who was never even considered for mass production. He was too weird to live and to rare to die….’ 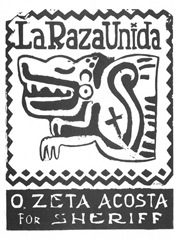 OZA put his life on the line during the riots, disturbances and trials of that period. He even ran for sheriff

In 1972, OZA disappeared in Mexico. The last person to talk to him was his son. Oscar said he was ‘about to board a boat full of white snow.’ No trace of him has ever been found. 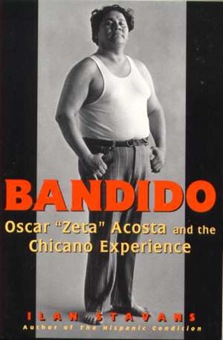 THE GREAT THOMPSON HUNT: An excellent website, no longer being updated, but full of interesting stuff. Includes:

Review of Bandido by Ilan Stavans 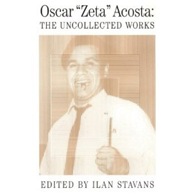 Listen to my long audio interview with Ralph Steadman about his book ‘The Joke’s Over Memories of Hunter S. Thompson

The Archaeology of New Journalism