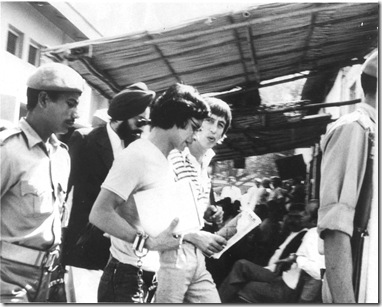 (Above) Caption on back of photo in red crayon reads: ‘Neville talking to Sobhraj who is under arrest in Delhi, Dated 1977. [Photographer unknown/The Generalist Archive]

DT: So what is happening to Sobhraj now?

RN: As far as Charles Sobhraj is concerned, our book is the case against him. This is another  irony, Neville as a cop. All the weeding together of the evidence, both from his mouth or from police records or from talking to the victims who survived, was done by us.

My greatest fear - its not a personal fear because if Charles escapes from jail I'll just change my name and go into hiding in Melbourne - is that more people will get killed because once you've killed one person nothing stops you killing others. You go to the same hell really. However we're battling a remarkable, charismatic, unstoppable man.

The latest news is this. All those people that were arrested with him in Delhi are now out of jail. Some of them are out of the country. One of them is back here. Even Marie Andrée Leclerc, who was his girlfriend in ? at the time of the murders, is now out of jail.

Charles has got a tape recorder in the jail so when some of the prison guards came and accepted a bribe from him to do something, he then took a petition to the High Court aimed to expose their corruption, which he withdrew at the last minute on condition that he was given the prison canteen to run, which sounds like small beer. It isn't. That gives him a lot of power because he gets a rake-off of every deal that goes on in jail to do with food. So he's in a position of absolute power.

A couple of prisoners were beaten up by him a few weeks ago. In other words he's running Tihar jail. In fact in one of his last letters to me, he said he wanted to congratulate himself because this time he would escape from jail by legal means. There is no extradition treaty between India and Thailand, which is where the five murders were committed. So let's say that his legal future is looking full of holes, so he could conceivably, some time in the next twenty years, be out scot free. Even though to me, personally, on tape which I have, he has confessed to the five murders in Thailand, two in Nepal and one in Pakistan. Personally confessed on tape to me. He has been charged with none of these murders yet because they took place in countries other than the one he was arrested in. So the world has not heard the last of Charles Sobhraj.

DT: Do you see any strong parallels between Charles Sobhraj and Charlie Manson ?

RN: There are obviously some parallels but there's none of that messianic hippie, Beatle-record-listening-to weirdness that Manson had. Manson used to meet women on street corners, fill them up full of acid, start to fuck them, tell them that their father was fucking them, play all sorts of psycho games. Charles was much more subtle, urbane and less obviously fucked up. and is not so much interested in having a whole commune of people. Charles is a loner. I think the parallels are very few except that he is young and charismatic, male, with a lot of accomplices, both male and female, around him. But to me its a different story played back on a different cultural tapestry.

Certainly I think the one strong element in both stories is how jails turned out to be their universities. That's where they both got their PhD in criminology. Charles' story comes out as a testimony of the failure of the prison system to do anything other than produce Charles Sohbraj1s. The final sting in the tail of all that is we may not agree with capital punishment but  what do you do with a person like Charles. It does put that dilemma right back onto our doorstep. Would you want him knocking on your back door? I wouldn't.

DT: What do you think are the implications of making a big movie about such a man?

RN: One of the reasons that I have stressed that the case against Sobhraj was our book was because I'd been asked often are you glorifying a criminal, which to me is ridiculous. Are you glorifying Adolf Hitler because you're writing a book about him ? I think that to decide not to tell a story because one individual may get an ego benefit out of it is ridiculous.

Whether or not the book works its an extraordinary story that, if you'd gone away with lots of acid and marijuana - 70 people in a room and 18 monkeys - came back and wrote the story up, you'd say bullshit, completely ridiculous, start again, it's too fantastic. It must be told and I think the book does tell it.

So what do we learn from it? First of all that gets shaky because there's no Agatha Christie black-and-white motive for the crime. But there are not many in-depth portraits of a murderer of the calibre of Sobhraj. I think that's why the book has now  been set as a text book in criminology classes and psychology classes. The book goes right in deep, none of it made up, from suitcases and suitcases and suitcases of original documents.

This is a story that has incredible relevance because we're all part of that story. We're all part of the Vietnam War and of cultural and family dislocation. The events of history sweep through that book just as they swept through our lives.

On top of all this Sobhraj is still alive. Its a story about the complete failure of law and order internationally, a complete indictment of the police forces, from Interpol to every Asian police force you can imagine. A lot of the critical consciousness that OZ had I think that this book has because of the story it tells.

In the end its an insight, a portrait of the making of a monster.