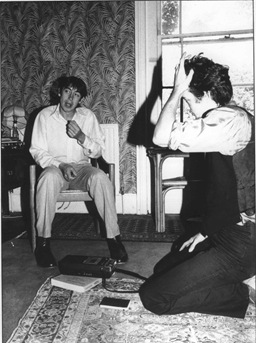 (Left): Photo of Richard Neville and myself during this interview, in a house in London’s Little Venice. Photo: Mikki Rain.

Part 2 of the interview continues here.

I don't think Sobhraj will ever be killed, he's sort of unkillable in a way. Unless he really does attempt a very daring escape from an Indian jail and the Indians actually get it together to aim their rifles roughly in his direction which, after four months in Delhi, one would find it hard to believe. Most of the time the soldiers didn't even have bullets for their guns.

Obviously our lives are entwined. I think that during the book both of us woke up with nightmares through it. I was thinking last night that I often wake up with a terrible feeling of guilt. I had a dream that they were looking for a body, that I'd killed the body. Somehow even dreams get intertwined. Although he says he has no remorse, I think I did get some of his unconscious remorse.

On the other hand, if you live part of your life as a journalist/writer rather than somebody who goes away and writes books about rabbits, and especially if you've had a fairly middle-class protected background, to go off on a rule-breaking adventure like that does expand the horizons. I got really deeply involved in the criminal scene in Delhi. I mean all our contacts there were French, Vietnamese, European criminals that had been let out of Tihar jail, or the police, or the very low-rated solicitors that just worked for criminals.

I think it's a problem having had such an intimate relationship with Charles. The way I've coped with it, which will sound very callous, is that it was predicated on a professional assignment.

I sent the book to him in Delhi. In fact, ironically, Emma Soames of the Evening Standard happened to be going to Delhi for some fashion junket and I just met her the day before she went and she said "Do you know anyone in Delhi?”. I said, "Well, as a matter of fact there is this guy, yeah." So Winston Churchill's granddaughter actually went and met Sobrajh and she was completely shocked by it. I mean just stunned.

He wrote me a fairly sour note saying why hadn't I sent ten copies of the book. Typical Charles. I thought well that's it. I think that now our relationship must come to an end and both of us don't write to each other at the moment.

DT: You talk about ironies. It seems to me that the biggest irony of all is that OZ, the magazine of fun, travel and adventure, glamorised the hippie trail and here you are writing about someone who...

RN: An obituary of the hippie trail, maybe.

DT: Is that how you see it?

RN: The reason that I felt I had to do this book, that I owed it to myself and also to a lot of people who went on the pot trail - and this sounds sanctimonious - is yes, one of the slogans of OZ was ‘the magazine of fun, travel and adventure’. ‘Play Power’ has a whole chapter on the pot trail. When I first left Australia to come to India I travelled on that trail. Now this is where the story gets interesting.

Nine years later I was leaving Australia again to join Julie in New York and the plane stopped at Bangkok and I thought, god, I'll go and check out all my old haunts and I tried to get a feel of the place. I thought, uhuh, why do they call it the pot trail, it should be the heroin highway. I was talking to a lot of the sort of guys who were still going and they were talking about the eight hour delays between Afghanistan and Iran because of all the border checks and the whole thing had become a kind of bureaucracy. So I thought, okay, I’ll do a piece on the pot trail ten years later.

Well I was getting back on the plane and there was an item in the Bangkok papers about an unidentified body found floating off the waters of Pattaya Beach resort and straight away I got a few goose pimples. I thought that sort of thing never happened because whenever we travelled the worst thing you got was dysentery. When you look back you think that's amazing. I mean I can imagine what would happen if a lot of penniless Asians tried to hitchhike their way through the South Bronx, and there we all were really surviving very well.

I'm not saying I regret people having gone on that pot trail because I think it really was an horizon-widening experience. No-one regrets it. There are not many adventures left in the world and that was one of them.

Right. So I saw this item and I thought that's a bit strange. Went to America and the very first piece I wrote in New York - I went there as a freelance writer - was on the pot trail ten years later. I started writing for High Times, ended up writing for the New York Times and then Random House, who had published ‘Play Power’ years ago, contacted me and said, "Hey, there's this guy that's been arrested for these" and they sent me down the cuttings and I thought my god, my god, there's that body. That woman was Teresa Knowlton who was the first one. I thought that is destiny to some extent.

I will go further than that and say that, in a way, I think it was an obituary of the pot trail because not only did Charles Sobrajh take the fun out of travel and adventure, it's that the countries themselves have just disappeared like Cambodia. I smoked opium with Martin Sharp in 1966 in Phnom Penh.

I'm writing a book about Tom Forcade of High Times. Given your 1970s NME beat, I was wondering if you'd crossed paths?

My gmail address is seanhowe. Thanks!