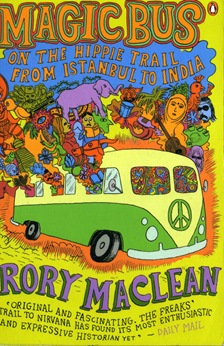 Regular readers of The Generalist will have read our Previous Posts (listed below) on the history of the hippie trail. This book was recommended by many sources as being one the key works on the subject. Many of you may already have read it but having just finished it, I am happy to be able to add my own comments and praise to what is a very fine piece of work.

Canadian Rory Maclean takes us with him as he travels along the old routes from Istanbul to Nepal via Turkey, Iran, Pakistan and India. At every step of the way, he tries to connect with people and places from the past whilst also reporting on the present day situation. Often the contrast could not be more stark. Its a remarkable journey.

Maclean has a brilliant way of interweaving the sights and sounds of the journey, bringing to life the people that he meets and giving enough of his own reactions to make it a personal journey as well.

Obviously the world is now a different place. Obviously Iran, Afghanistan and Pakistan in particular are no longer carefree and picturesque places to visit. Maclean has some very nasty experiences and some harrowing train and bus journeys which make you pleased you are the armchair traveller. Then, at the next turn, he describes an idyllic situation that makes you envious not to be there.

He is carefully non-judgmental. He calls the hippies and the beats who first made these journeys the Intrepids and is at pains to give those who weren’t around at the time enough background to help you understand why literally millions of people made the journey east in search of spiritual adventures during the 1950s-1970s.

He meets some wonderful characters who still hold on to their beliefs and ideals and others who have lost the plot. He is also at pains to ask for opinions, good and bad, about the hippie trail and its effect on the people of the countries they passed through. There are of course good and bad aspects. Interestingly he points out that now the traffic is likely to come from the other direction, young eastern people heading for the West.

One the most amazing facts in the book for me was concerning the Beatles five week stay in India with the Maharishi, a well-known part of the saga of the moptops. What I didn’t realise is that they wrote some 40 songs in that short period and that most of both ‘Abbey Road’ and the ‘White Al bum’ contain songs written on the bank of the Ganges. That does put a different light on things.

The story is extremely well-told and has a wonderful story arc. The final chapters are amongst the best in the book. Its clear that the world has changed since those times but he gains inspiration and admiration for the pioneers who travelled in rickety buses searching for a life-changing experience at a time when there were no mobile phones or GPS devices, no internet and cash-points, very few cheap flights and precious few cameras.

‘Magic Bus’ is a warm and wonderful triumph by a great travel writer whose many other titles I intend to seek out. You'll enjoy the journey.