I went to interview Andrew Loog Oldham at his house in Chelsea and this piece was first published in the NME on April 9th 1977. It centres on his record label immediate. I have a much longer version of the interview and the original tape in the Archive. 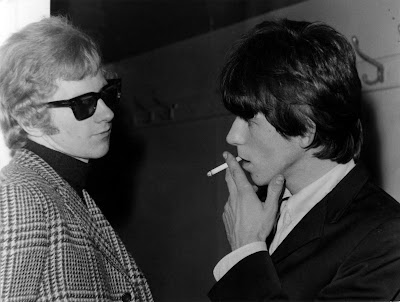 "What's is going to be then, eh?" ALO and KR contemplate a bit of the old ultra-violence.

READ THIS – THERE’S MONEY IN IT

WHEN Immediate Records was launched in spring, 1965, its slogan was 'A New Record Company of Tomorrow Today'.

Founded by Andrew Loog Oldham, at that time Stones' manager and 60s hipkid, along with partner Tony Calder, it was the brightest independent label around, featuring redhot product from the likes of The Small Faces, Chris Farlowe, Amen Corner and The Nice, backed up by a production team including Mike D'Abo, Jagger (for a time), Steve Marriott and Ronnie Lane, and Oldham's own successful, super-speedy promo techniques.

With the help of pirate radio and the general British 'Swinging 60s' boom, Immediate's fortunes rocketed, allowing Oldham to main­tain plush offices in London and New York while producing some of the definitive sounds of the period.

Five years later however, the dream was over, the company grounded by money troubles and problems with its top acts.

Oldham went bankrupt, Immediate went into liquidation and the lawyers moved in.

Our interest in the fortunes of Immediate, past and present, was sparked off by an accountancy firm's letter to NME claiming the sale of the Immediate catalogue had now been completed and that outstanding royalty payments could be made to all Immediate artists.

The accountants needed some assistance in locating various artists.

We told them where they could find Jimmy Page, Eric Clapton, Pink Floyd and Jeff Beck . . . informed them that Sam Cooke and Cyril Davis – but were stumped on the remaining cast — featuring names like the Outer Limits and Stuff Smith, who seemed born only to be forgotten.

For afficionados of Immediate product, however, the news looks good. Our call to the lawyers confirmed that the entire catalogue has been bought by NEMS, the cash settlement allowing past royalties to be paid.

Peter Knight of NEMS says all contracts have now been re­negotiated, and there are plans to reintroduce Immediate product slowly but surely on to the market.

Already out are The Small Faces "Ogden" album alongside two of their best singles, "Lazy Sunday" and "Itchycoo Park", Chris Farlowe's "Out Of Time" was a chart hit second time round and was backed by a "Best Of" . . . album, while Amen Corner and Nice albums rounded off the first batch of releases.

Plans for 1977 involve 12 albums and six singles including vinyl from Humble Pie and P.P. Arnold.

And when the re-releases start wearing thin, there are also plans to introduce new talent to the label. So Immediate lives on!

There this story might have ended, except that Knight put me on to Oldham himself, back in London for a short period after living in South America, enabling me to delve further into the history of this unique label.

Oldham's affection for that period of his mercurial career was obvious even over the phone as he talked at length about past plans and dreams.

By his account the whole story began in a telephone box. As manager of The Rolling Stones he was off to Ready Steady Go with the band after a particularly frustrating day dealing with Decca. The idea of putting together their own record label came up, the car was stopped, Oldham telephoned Leslie Gould at Phillips, securing a provisional yes on a distribution deal and by the time they got home that evening they had the Immediate label set to go.

Oldham had already been working with Tony Calder for some time— after they had merged public relations companies.

He talks of his 'Phil Spector dreams' of the time which merged well with Calder's interest in the facts and figures end of the business.

Having been Stateside with the Stones and having met both Phil Spector and Bob Crewe, he was impressed not only by their production abilities but also by their business acumen.

The level of material success that those top engineers and producers were enjoying obviously turned the young Oldham's head.

Having a record company was not only an ideal vehicle for the Stones but also an important part of Oldham's masterplan.

At that time the British record market was dominated by four major companies: Decca, EMI, Pye and Philips.

The majors were happy to just stand around taking notes, letting the young pacesetter have its head. After all, they had nothing to lose and everything to gain, swiftly moving in to pick up on any promising trends Immediate uncovered.

As it turned out the Stones never did record for the label, though they did provide upfront money of £25,000. Oldham was quick to make it clear that this figure only covered buying out The Small Faces from their existing contract — and we never did get round to talking about where the rest of the finance came from.

The label debuted with three sing­les: "Hang On Sloopy" by the McCoys, "I'm Not Saying" by Nico (an Oldham discovery and production number) and the Dylan number "Bells Of Rhymney" by Fifth Avenue (produced, incidentally, by Jimmy Page).

The show was off and running and shortly the label had a strong stable of artists. However, according to Oldham it was only The Small Faces who really sold. The reputation of the rest he puts down to hype or the warping effect of time — which makes things look much bigger in retrospect than they were then. It was a good time though and a profitable one.

Immediate was making the pace, with Oldham displaying a confident knack for creating and grabbing head­lines either as one of The Rolling Stones bad boys gang or as a young, hip label owner who ran a fleet of cars, was always jetting to the States, and who lived in splendour in a £40,000 mansion in Richmond.

Eventually however, the bubble had to burst.

Steve Marriott was once quoted as saying that the reason he liked Immediate so much was that it was like being back at school again. But it was this famous Immediate informal­ity that led to its downfall.

Oldham analyses the label's demise as due to 'bad management of the money combined with the fact that the direction had started to go skew-whiff.

With all their top bands producing there were few problems. But by 1969/1970 Amen Corner had broken up, The Nice were causing hassles for the company and were becoming expensive to record compared to what was coming back in returns, and one of The Small Faces had transmuted into Humble Pie, while the other hung around for Rod Stewart to pick up the pieces.

Humble Pie's "Natural Born Boogie" was a big hit for the label but by the time all the individual members' contracts had been sorted out — and they'd paid lotsa cash to buy out Frampton from The Herd — it ended up as a loss leader.

Looking back, Oldham believes that "If we had been clever or less idealistic we would have sold out to get an injection of cash and every­thing that goes with it."

But they hung on to their dreams and in March 1970 the company was put into liquidation and Oldham ended that stage of his career in the bankruptcy courts.

Tony Calder is now working at NEMS and presumably was able to sort out the complex rights situation for them.

As for Oldham's career since . . . well, that's another story. 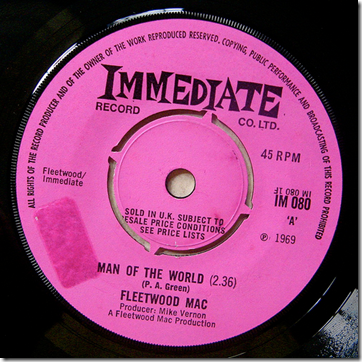 The story carried a box entitled The Lucky Winners and read as follows:

'Seasy as premium bonds, isn't it?

And while Clapton and Page may not need the windfall, we're certain there are others in the list who probably do.