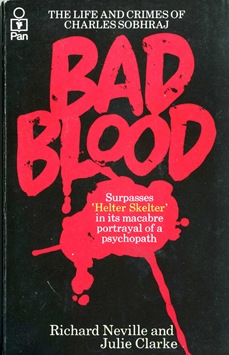 Following on from my Previous Post on Rory Maclean’s account of the  Hippie Trail, one name in the book rang a large bell with me: Charles Sobhraj, the Asian serial killer.

This led me to dig around in  the Generalist Archive and find all the material relating to the interview I did with Richard Neville, formerly editor of OZ magazine, when he was in London promoting the publication of ‘Bad Blood’, the excellent standard biography of Sobhraj he wrote with Julie Clarke. This original story was published in the NME under my pen name Dick Tracy on the 11th October 1980. This is its first internet publication.

The interview rambles a bit in the middle into material about the counter-culture in general, Neville’s meeting with Bob Geldof in Australia and other related matters. I have edited it down to focus on Sobhraj.

Richard Neville, the son of a Lieutenant Colonel, was born in Sydney, Australia in 1941. While at the University of New South Wales he edited his first newspaper ‘Tharunka’ ( ‘message stick’ in Aborigine) before launching  the  satirical magazine OZ on April Fool’s Day 1963. He and his fellow editors twice faced obscenitycharges; at the second trial, they were sentenced to six months in prison with  hard labour. Released on bail pending an appeal, they were eventually acquitted.

A  similar pattern of events followed when Neville launched OZ in London in 1967. He was prosecuted at the Old Bailey in 1971 , along with Jim Anderson and Felix Dennis, under the Obscene Publications Act for the notorious School Kids Issue, a case that grabbed national headlines, and earned Neville and the others a prison sentence, a verdict that was again overturned on appeal. 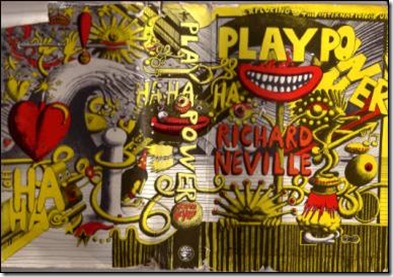 In 1970, his book ‘Play Power’, a summary of the major themes, events and ideas of the international counter culture  and launched the alternative weekly newspaper ‘Ink’. The last lines of the book sum up the mood of the moment: 'The politics of play: the international equi-sexual, inter-racial survival strategy of  the future, the laughing gas to counteract tomorrow's Mace. Onward to the eighties, Motherfuckers.’

Now the eighties have arrived, Richard Neville is back in London for a short visit to tape material for an Australian tv show and  to talk about his latest book- a dark story of modern crime.

‘Bad Blood’, which he co-wrote with Australian journalist Julie Clarke, is the story of Charles Sobhraj, a modern mass murderer, born into Japanese-occupied Saigon, the illegitimate son of a Vietnamese shop girl and a prosperous Indian tailor. When he was four, his mother married a  French junior Army officer and Sobhraj became torn between his real and adoptive families. Against his will, his mother later took him to France where he was sent to boarding school, despite the fact that he could not speak the language. He became lonely and embittered and, when he left school, his life revolved around the twin vice centres of Marseilles and Saigon. He dreamt of his rich Indian father and the life of luxury he felt had been denied him. A student of Nietzsche, he developed his dominant character and personal charisma and used them to full advantage in a crime career that led from stealing cars to dealing gems to burning bodies.

As Neville relates, they were hired to write a quickie biography of Sobhraj and ended up in a nightmare assignment that changed their lives. They describe their book as journalism which uses some of the techniques of a novel - a tradition established by such classics as ‘In Cold Blood ‘- but it remains a confusing and disturbing read as if to emphasise that in life there are no neat edges. There's a bewildering variety of locations, victims,  and situations which leave the reader no time to relax if he or she wants to keep a grip on the story. Yet the message of the book survives, the strangeness leaking out like perfumed puss.

In one of the last issues of OZ, Neville wrote: 'A writer especially feels a prisoner of his past, bound by statements uttered previously....Writing for me is hard labour because of the battle to express what I really feel and think as opposed to what I ought to feel and think. This struggle, however hypocritical it becomes at times, to be explicit, consistent and truthful, has rendered it impossible for me to sign on the dotted line of any particular brand of ism.'

He still has that earnestness and independence. He is  good company and an interesting and stimulating talker. He recognises the ironies involved in him writing ‘Bad Blood’ yet he does not shy away from them.'

Dick Tracy: At the end of ‘Bad Blood’ you wrote: 'I had come to Delhi with a crude theory of Charles as a child of colonialism revenging himself on the counter-culture. Instead I was dazzled by a brilliant psychopath.’ Could you explain that remark and talk about how Sobhraj has affected your life ?

Richard Neville: Well that remark is difficult to explain of course. I would begin when he came out of the French jails in '68. I was in London at the time and it seemed that the whole world was going to be conquered by the young and the wild and the free and the rebellious and that's when Charles was on the threshold of what should have been a new life for him but it ended up with him marauding on young Westerners in Asia.

So when I first got interested in the story I thought that is really fascinating. A French-Vietnamese, a person with a lot of family dislocation as well as  cultural dislocation, crossing the border to kill people in faded jeans drifting through Asia without much money. Why?

It seemed there was an element of cultural revenge but I wouldn't give it as much causality as I did before. I think Sobhraj certainly hated. You see for Charles, who was materially deprived and spent all his life wanting to get wealth back, people who voluntarily shed wealth, shed their middle-class lifestyle and drifted through Asia on $1 a night hotels smoking marijuana completely did freak him out. That's why we would occasionally meet people who'd been ripped off by Charles and they'd say: "Yes, he used to roll up his sleeves in restaurants and say 'Look, no syringe marks.'" So he was obsessively anti counter-culture. That's the political side.

The more he confessed to his crimes and boasted about them - it was like being lowered into a well and I went lower and lower and lower. Maybe Dante's Inferno would be a better analogy.

I only used the word psychopath once in this book and that's the second to last sentence because as soon as you put a label, people don't want to know. But the thing about Charles is that he is - to use the title of one of Nietzsche's books, which he read a lot - All Too Human. I mean he's an extremely likeable, charismatic man of versatile intelligence and abilities, extraordinary traits of character that I think you and certainly I was taught to admire. You know, 100 press-ups before breakfast.

From talking to Charles you come away with very complicated emotions. I mean he's obviously a monstrous man. He's a man who's confessed to killing and torturing people that I would identify with and yet he's a man who was born in such incredible circumstances of disharmony and lack of justice and survived through that and seems to be unstoppable.

Yet while I was actually in Delhi talking to him every day and being with him in an intimate situation and watching him operate, I couldn't help but admire the way he turned every situation to his own advantage. Not admire because I wanted to emulate but admire because under his own terms he certainly was impressive.

DT:Do you ever feel worried  because you are now part of his life. You've been involved with him and he knows you. Presumably he will get out at some stage.

RN: That's a really fascinating question and nobody else has asked that.

The thing is it sounds all very trendy. It's not. We've had a lot of problems with this book. It's really been an absolute grind. It was two years in all, the research and the writing. Nobody wanted us to do the book like this. We were supposed to do a quickie book in three months, a kind of ghost-written biography. It's been an absolute nightmare.

But at last its kind of taking off and the movie rights are now on their way. Roman Polanski was shown the book and asked to direct the film and he said incredible, he would love to do it but he made one condition. No-one else knows this yet, just heard it last night. The condition was that Charles Sobhraj would no longer be alive, for that very reason that is the nub of your question. Especially after what Polanski's been through, he didn't want Sobhraj around.