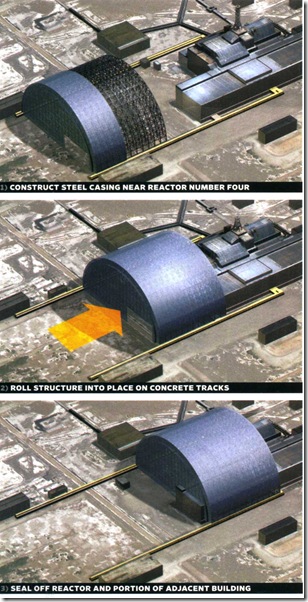 (Above: When Chernobyl Four reactor blew up in April 1986, spewing radioactive fallout across Belaruus, workers quickly slapped a giant concrete sarcophagus over the site to contain the hazard. It was supposed to be a temporary fix. Two decades later, the Ukrainian government is finally planning something more permanent.

The French construction company Novarka has design an arch-shaped steel structure – 843ft wide, 30 stories high, and weighing almost as much as two Eiffel Towers – to be assembled next to the reactor. The structure will be rolled into place on concrete tracks, straddling part of the adjacent building and enclosing the reactor. Set for completion in 2012, the so-called New Safe Confinement can’t come soon enough. According to a government spokesperson, the shelter will seal off “the lava-like formations that are destroying the current sarcophagus and creating radioactive dust.” And it could finally allow the demolition of the old concrete tomb and reactor. Sounds like a blast.

“Pripyat funfair was due to be opened on May 1st. The Chernobyl disaster happened April 26th. No one ever managed to ride the ferries wheel. It remains one of the most irradiated parts of Pripyat since the disaster, making it still dangerous today, 22 years on.” Read more: http://funny.funnyoldplanet.com/strange/the-chernobyl-story-told-in-pictures/ 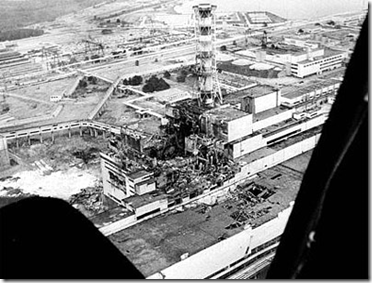 - That Innocent Saturday,a docudrama on the Chernobyl disaster, which opened in move theatres across Russia, is banned in Belarus, the country that suffered most from the disaster.

- Rosatom is building one quarter of the 60 nuclear power plants under construction worldwide, in Turkey, Bulgaria, India, China and Iran. They plan to build 11 new reactors in Russia in the next decade.

- According to Vladimir Slivyak, head of Eco-Defense, a Russian environmental group,11 of the 32 nuclear reactors working in Russia are of the Chernobyl era, built with designs from the 1970s.

"On April 26th,  when the 25th anniversary of Chernobyl will happen, we are planning to organize bigger protests and probably more radical," says Slivyak .