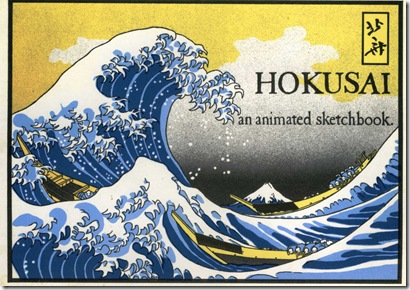 Above: A promotional card for a five-and-a-half minute British Art Council film ‘Hokusai: An Animated Sketchbook’, directed by Tony White in 1979, which explores 60 of the more than 30,000 drawings Hokusai is reputed to have produced in his life time.

As if to bring attention to itself, this picture which was stuck on my wall, cam unstuck and landed on the desk in front of me, triggering off a chain of thought. Its is the most famous image in Japanese art which I was now looking at with fresh eyes. Was this a depiction of a tsunami. Thanks to the wonders of the internet, the answer was  found in the ‘Notes & Records of The Royal Society’, in a paper entitled ‘What Kind of Wave is Hokusai’s Great wave off Kanagawa? by Julyan H.E. Cartwright and Hisami Nakamura.

They report that: ‘The print is often reproduced as the artistic depiction of a tsunami’ and ask the question ‘Did Hokusai really have a tsunami in wind when he composed the work?’

They conclude that it is ‘more probable that Hokusai intended to depict an abnormally large storm wave.’ There is, they say, a great deal of scientific interest in these ‘freak’ or ‘rogue’ waves at present. 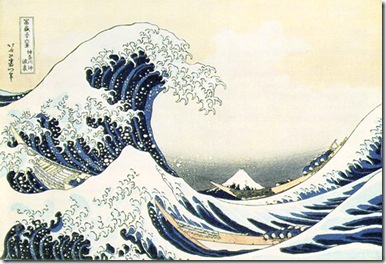 ‘The great wave [the boats] are about to encounter is a plunging breaker, a gigantic ocean wave breaking into spray and spume, and at over 10m in height is so large in terms of waves in Tokyo Bay that it must be considered a freak or rogue wave.’

The paper, in addition, dissects every aspect of the image and the life and times of Hokusai, in forensic detail. Fascinating.

For instance, Benoit Mandelbrot noted in Hokusai’s print the fractal nature of the breaking wave  - a type known as a ‘plunging breaker’. Modern ocean observations and dynamic computer models both confirm that Hokusai accurately depicted the wave’s structure, more than a hundred years before it was confirmed by science.

‘Since the age of six, I had a habit of sketching from life. From fifty onwards I began producing a fair amount of art work, but nothing I did before the age of seventy was worthy of attention. At seventy-three, I began to grasp the structures of birds and beasts, insects and fish, and of the way plants grow. If only I go on trying, I will surely understand them still better by the time I am eighty, so that by ninety I will have penetrated to their essential nature. At one hundred, I hope I may have a divine understanding of them, while at one hundred and ten I may have reached the stage where every dot and every stroke I paint will be alive. May men of great age and virtue see that I am not hoping for too much!’

- The afterword to an 1834 collection of his work Fugaku Hyakkei (One hundred views of Mount Fuji) that he signed ‘Gakyo Rojin Manji’ (‘Manji the old man mad about art’)—he was then 74 years old.