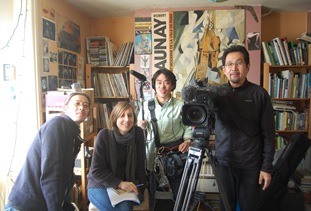 Life is strange. Yesterday The Generalist’s HQ was visited by a Japanese film crew (with Marie as translator) who had come to interview me for a primetime documentary, due to air on NHK (the Japanese equivalent of the BBC) on April 8th.

The subject was Broken Arrows, the name given by the US Department of Defense (DOD) to serious accidents involving nuclear weapons – a subject that was included as part of the book ‘The Greenpeace Book of he Nuclear Age’ which was published 22 years ago.

The book was at the time of its publication the most detailed and complete summary of military and civil nuclear accidents. Whilst doing some background research and out of personal interest, I did some background reading on the current state of the Japanese nuclear industry and discovered that currently 34.5% of Japan’s electricity is generated by nuclear power. Japan is the third largest nuclear power user in the world with 53 reactors currently operating.

During the interview, I asked the crew whether they were concerned about all these reactors being built in a country prone to earthquakes and the cameraman admitted he was. The very next day, as you all now know, Japan was hit by the biggest earthquake in the last 100 years, measuring 8.9 on the Richter scale.

At time of writing this is the state of play regarding Japan’s reactors, according to Bloomberg news:

A fire broke out at a turbine building at Tohoku Electric’s Onagawa reactor, company spokesman Kazuya Sugawara said, adding that there’s no risk of a radiation leak.

Japan issued an emergency warning after Tokyo Electric shut its nuclear reactors in Fukushima prefecture, Chief Cabinet Secretary Yukio Edano told reporters in Tokyo.  “We are declaring an emergency situation in accordance with the law,” Edano said. “No leakage of nuclear material outside the facility has been confirmed. Therefore, residents in designated areas as well as visitors don’t need to take special action.”

Tokyo Electric shut seven reactors at its Fukushima Daiichi and Daini atomic plants while three reactors at Tohoku Electric’s Onagawa station were halted, the trade ministry’s Nuclear and Industrial Safety Agency said in the e-mailed statement. Japan Atomic Power shut the No. 2 reactor at its Tokai plant, the agency said.

LATEST NEWS: The fire at the Onagawa plant has been extinguished, according to the International Atomic Energy Agency (IAEA). Problem reactor is now Fukushima 1. Reactor has been shut down but they are having problems getting water into the reactor to cool the core.

Work had begun on restoring the cooling function at the reactor, Jiji news agency quoted the trade ministry as saying.

Tepco confirmed that water levels inside the reactors were falling but it was working to maintain them to avert the exposure of nuclear fuel rods.

The company was trying to restore power to its emergency power system so it could add water to the reactors, a Tepco spokesman said.

"There is a falling trend (in water levels) but we have not confirmed an exposure of nuclear fuel rods," he said.