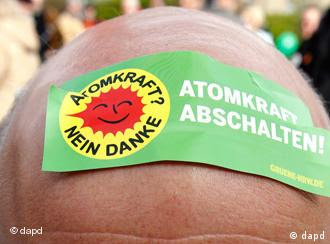 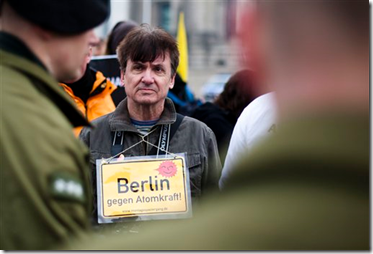 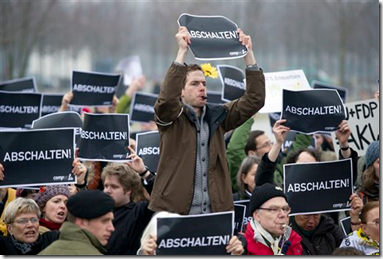 The signs read “Switch Off”

Around 210,000 demonstrators in Cologne, Berlin, Munich and Hamburg vented their anger at the government's nuclear policy on Saturday, supported by Germany's umbrella union body, the DGB, as well as politicians from the opposition Greens and Social Democrats.

Alarmed by the nuclear crisis in Japan, environmental and religious groups as well as unions organized the demonstrations, which kicked off in Cologne's city center, where nearly 40,000 people turned up to support the cause.

Around 90,000 people took to the streets in Berlin while in Hamburg, organizers counted around 50,000 demonstrators and in Munich the figure was estimated at 30,000.

Organizers said they were the biggest anti-nuclear protests Germany has ever seen.

German Chancellor Angela Merkel said that seven reactors that went into operation before 1980 would be offline for three months while Europe's biggest economy reconsiders its plans to extend the life of its atomic power plants. A previous government decided a decade ago to shut all 17 German nuclear reactors by 2021, but Merkel's administration last year moved to extend their lives by an average 12 years.