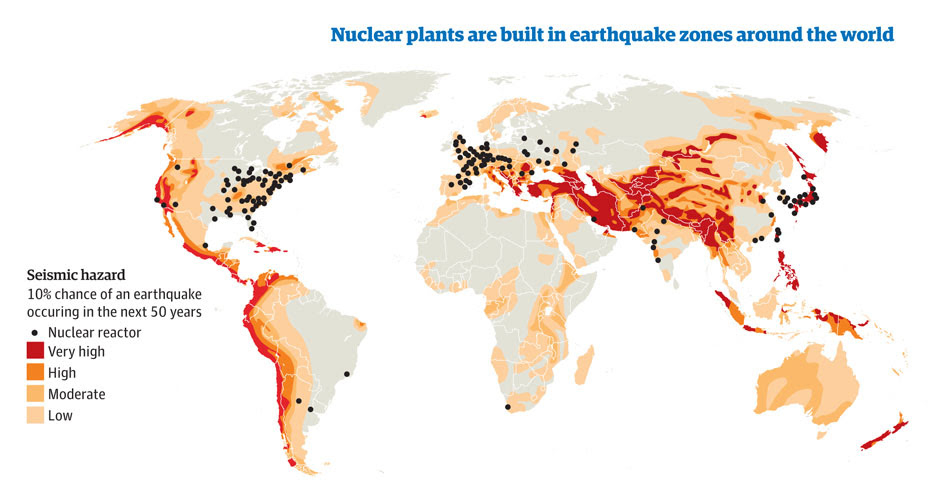 Top: Nuclear plants are built in earthquake zones around the world, a good example of integrating data sets to great effect. [Source: Simon Rogers/Datablog. The Guardian]

Bottom: The size of each territory indicates the amount of electricity generated in nuclear power plants. Only 30 out of 200 territories produce power in this way - and of those 30, 17 are in Europe. In 2002, Sweden produced the most nuclear power followed by France. NO nuclear power is generated in any of the territories in Central Africa, Northern Africa or Asia-Pacific and Australasia.  [Source: ‘The Atlas of the Real World’ by Daniel Dorling, Mark Newman and Anna Barford] [Thames & Hudson. 2008] Put together by the people behind worldmapper.org ]

Where are the world’s nuclear reactors [New Scientist] 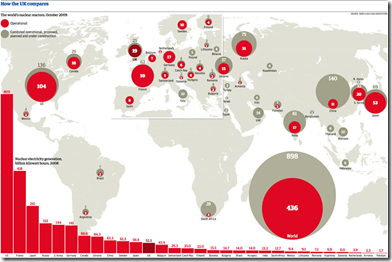 Power companies around the world currently rely on 440 nuclear reactors in 30 countries — 104 of them in the U.S. — to produce roughly 14 percent of global electrical supplies. To meet rising demand and reduce carbon emissions, power companies outside the U.S. are building 63 new plants. Another 158 plants are in the planning stages and 324 more have been proposed, according to the World Nuclear Association.

Europe and Japan are among the most heavily reliant on nuclear power. Sixteen countries get at least a quarter of their electrical power form nuclear, including Japan (30 percent), France (75 percent), Belgium (51 percent) Finland (33 percent) Germany (26 percent) Switzerland (40 percent) and Sweden (34 percent). Those countries have only a handful of new plants under construction.

China has by far the world’s most ambitious program to expand nuclear power with 27 plants under construction. That would more than triple the number of plants in China and boost nuclear power output roughly five-fold. Some 50 more plants are in the planning stages and another 110 have been proposed.

‘The Obama administration signalled Monday that the accident in Japan will force it to take another look at its policy of expanding nuclear power in the U.S. ..Building on the Bush administration’s efforts to revive construction, President Barack Obama in his State of the Union address proposed some $36 billion in government loan guarantees to jump-start construction of as many as 20 new nuclear power plants….the U.S. hasn't licensed a new nuclear power plant in more than 30 years…since the effort to revive nuclear power began a decade ago, a much more attractive alternative has popped up – natural gas.’

‘Premier Wen Jiabao announced this week that China would put a moratorium on construction of new nuclear power plants while it updates safety standards. But China's insatiable thirst for energy will probably ensure that its long-term commitment to nuclear power continues.

China is ‘building nuclear reactors faster than any other country in the world…Projects in China currently represent 60% of all new nuclear power plant construction worldwide.

‘Despite foreign assistance, China's nuclear industry is still playing catch-up, with most reactors being built with designs based on 30-year-old technology. Most of China's new reactors are being constructed along the nation's eastern coast, making them vulnerable to tsunamis, experts said. Questions also remain whether China will have enough qualified workers and safety regulators.’

Amid the nuclear crisis in Japan, the reliability and safety of made-in-Korea nuclear reactors have become President Lee Myung-bak’s buzzwords this week.

The alleged caution creeping into the nuclear energy industry remains a fear factor for South Korea as it set the ambitious goal of taking up to 20 percent of the global market in the forthcoming years by exporting its nuclear technology.

Lee ordered the Ministry of Public Administration and Security to carry out regular training to prepare for possible nuclear accidents.

France  gets 80 percent of its electricity from nuclear plants. It has 58 nuclear plants - three more than Japan - with an average age of 25 years. ‘While Europe faces lower seismic threats than Japan, at least six French plants, including the oldest facility in use since 1977, are located in areas of 'moderate seismicity', according to Liberation newspaper. ‘

‘In nuclear-free Italy… a referendum had already been scheduled for June, in an attempt to block proposals by Prime Minister Silvio Berlusconi's conservative government to begin constructing nuclear power stations by 2013.  Italy is prone to violent seismic shifts and more than 300 people were killed in an earthquake in the central region of Abruzzo in 2009.’

Polish premier Donald Tusk also said that Japan's nuclear danger would not influence Warsaw's plans to build two nuclear power plants, the first of which will be built from 2016.

Russia also showed no signs of backing away from Prime Minister Vladimir Putin's plans to construct 26 plants by the year 2030, aimed at doubling the nuclear share of energy to about a third.