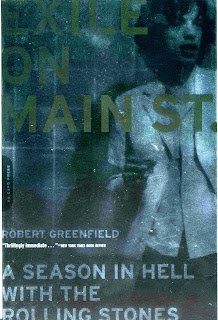 The happy coincidence of receiving and reading the newly- released paperback edition of 'Exile on Main Street: A Season in Hell with the Rolling Stones' by Robert Greenfield [Da Capo Press. £9.99] shortly before seeing the Scorsese documentary 'Shine A Light', at a 4:00 Saturday screening at the Duke of York's in Brighton with friend Manek and son Louis, has filled my heart and mind with things to say.
Greenfield, a class act, old-school music journalist, takes us back in time to the Villa Nelcotte in the South of France where, during the long hot summer of 1971, Keef (with Anita Pallenberg) sets up base to begin recording what proves to be the crucial Stones album -their dark masterpiece if you will - a portion of which was forged in the Villa's basement, which may well have been used for torture during the period when it was a regional Nazi HQ.

Night after night, band members troop over there from a string of surrounding villas, to wait to see whether Keef will emerge from the darkness and junk to come downstairs and make some magic happen. Most nights end in frustration. Mick Taylor is close to a nervous breakdown. Mick gets married and has a pregnant Bianca on his hands. The house is full of visiting junkies (a sad portrait of Gram Parsons here), petty criminals, bagmen constantly ferrying more junk. There are knives, guns, thieves and police. Our of this dark stew, a few flashes of silver are mined.

By now the Stones have become royalty. They can have anything the desire and are already able to marshall powerful political, financial and legal resources to keep their Renaissance court
intact and on the road - despite Keef's best efforts to bring the whole enterprise to its knees. Once more, he faces serious criminal charges, once more he and Anita escape the country by the skin of their teeth and once more, money changes hands, charges are dropped or changed to ones that carry lesser penalties. The entire band follow Keef to LA where the album is finally finished but they cannot tour until Keef (and Anita, now pregnant and using) undergo drug rehab in Switzerland. Not a pretty picture.

Greenfield concludes the saga with an examination of how this album became considered to be a masterpiece and brings the story right up date with a portrait of the Stones of today -mega rich, out-grossing every other music act in the world, earning further fortunes for five-minute photo-opportunities with corporate clients.

Which brings us neatly to Scorsese's movie 'Shine A Light', which eschews the darkness and 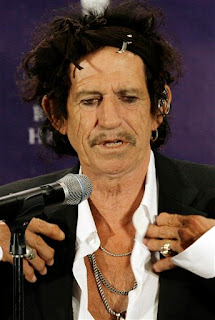 concentrates on adding majesty and lustre. Marty, of course, loves the Stones from way back and had already made one of the great music concert films ever - 'The Last Waltz'. The documentary of the making of that film reveals in fascinating detail how Scorsese planned his shoot.

In this film, all that material is in the main movie, as his people and their people struggle to find agreement on the staging and the all-important set list. Scorsese plans to shoot two concerts, back to back, in the beautiful old Art Deco Beacon Theatre in New York rather than in a giant stadium, in front of an invited audience which includes Bill Clinton. This long black and white opening sequence builds the tension perfectly. Marty gets his set list but only scant minutes before the band is on stage.

What follows is a classic performance, beautifully and dramatically shot and edited. (According to Philip French's review in The Observer: Scorsese brought in eight major cinematographers using 18 cameras) The lighting is exquisite, the choreography sublime. Apart from brief archive cut-aways, we're there up-close and personal with the Stones and their extended band - backing singers, keyboards and horn section led by long-time Stones stalwart saxophone player Bobbie Keys.

The first thing to be said is the strangeness of the set. Given the size of the songbook, one would have to call the track selection eccentric.

There are three guest appearances: we could have done without Christine Aguilera and possibly also Jim White but Buddy Guy is a real star - what a voice, what magnetism. Keef is so impressed he gives Guy his beautiful back Gibson on stage, a gunslinger's tribute from one great to another.

The film has its genuinely thrilling moments when the blood stirs and small tears began trickling down my cheeks (yes I can admit that). For my generation, the Stones provided the soundtrack of our lives. Most fascinating of all are the bands' extraordinary faces on which their entire history is marked like a road map. Mick struts pouts and prances non-stop, Keef's killer chords set the pace while he gives out secret smiles, Charlie's drumming is crisp, powerful and immaculate and Ronnie looks as cool and taut as ever. At the end of the day - magnificent!

At the post-screening debrief at The Open House, we agreed that Scorsese should just spend the next 10 years filming every important band in this manner - the Zep would be a good start.

The Stone With The Golden Arm, my story on Keef's heroin bust in Toronto, originally published in the NME.

Hear the interview with Nick Kent on the Audio Generalist, which includes some Stones material. Nick has written one of best ever essays on the Stones in his book 'The Dark Stuff.'

2. Wikipedia says most of the film is taken from the second of the two performances. Includes complete track listing as follows. Performance begns with Jumpin' Jack Flash and ends with Satisfaction.
3. Short New Yorker piece about the recruitment of the audience for the film.