1960-1963: Rebirth, out of prison. Life exciting, trying to make up for the years I'd been away. My Generation, the Beat Generation, had made it and I wasn't there…The fact that in prison I had done poetry and jazz with some of the best jazz musicians in the country didn't seem to carry any weight with me. Bea's seventy year old mother, Mary Morrison, was bringing me beat poetry from City Lights Bookstore in her native . … Found work as book designer and Art Director for scientific publishing house, Academic Press. Used my position as art director to buy printing from Alger Hiss… Never thought him guilty, and told him so. He accepted a dinner invitation from Bea, and we had a great evening sharing Lewisburg and McCarthy experiences. It was during this period that the seeds were sown for the undercurrent of my life's work: serving those in prison and those facing prison, and those trying to survive after release. With a few others, organized Jailhouse Anonymous - a quiet, one-on-one service organization which takes no money for services.

1963-1966: The Art World. With friend Bill Dufty we founded monthly art magazine, ‘The Arts Calendar’, [which we] continued to publish for three years. Immersed in the glitter and glamour of the fine art world, and discovered it has as many morality glitches as the streets and politics, and in many ways it seems to have more corruption - too much big money involved. Wrote, edited and published fine art book, ‘The Art Collector’s Almanac’. It got me an invite to Lyndon Johnson's White House…Attempted to get a passport so as to travel to Europe on art-related business, but the State Department said no. Called Abe Fortas… one of the first to read the galley proofs on ‘False Witness’ prior to its publication [and he] got the State Department to back down.

Both the Ford and Rockefeller Foundations turned down my proposal for help in completing a history of art exhibition - the follow-through of the already published volume - and said that they would underwrite it if I were to withdraw from the project. I became angry and destructive. I convinced myself that regardless of what I did or might accomplish, society would never forgive me for my role in McCarthyism. My bitterest act, greater than any I had ever known. I took all the research I had collected, and rented a fishing boat at in . Went out into the ocean and dumped it all: catalogues, photos, slides. To this day, the greatest regret of my life.

1965: My perception of a Christian society unable to forgive propelled me deeper into the counter culture of the 60's and 70's. Was deeply involved in the first "Underground" newspaper, ‘The East Village Other (EVO)’.Discovered Tim Leary and legal LSD, began taking trips and wandering into the unknown. In order to punish the United Fruit Company, helped create the hype that smoking banana peels would get you high.

'Will bananas get you high? Of course not. The whole thing was a hoax first publicized in the Berkeley Barb in March 1967. The wire services, and after them the whole country, fell for it hook, line, and roach clip. "Smokeouts" were held at Berkeley. The following Easter Sunday, the New York Times reported, "beatniks and students chanted 'banana-banana' at a 'be-in' in Central Park" and paraded around carrying a two-foot wooden banana. The Food and Drug Administration announced it was investigating "the possible hallucinogenic effects of banana peels."

'The outcome of the FDA study I have not been able to discover. However, in November 1967 researchers at New York University reported that a chemical analysis of banana peel had found no intoxicating chemicals and that the high was mainly psychological. It was obvious at the time, at least to some of us, that the whole thing was a put-on. I'll bet even the pranksters at the Barb didn't expect suckers to be falling for it 35 years later.'

1965-1966: Bea and I separated… Norman Mailer and I to get to know one another. I had met him at Sy Krim's 40th Birthday party. Liked him, trusted his non-Christian soul. He had a directness and clarity which made me comfortable. When he ran for Mayor of a few years later, I co-chaired the Norman Mailer for Mayor Committee in which was called The Mailer Mafia Snow Removal Trust. We had a big bash to raise funds, and got Christine Keeler of Profumo fame to auction her bra. 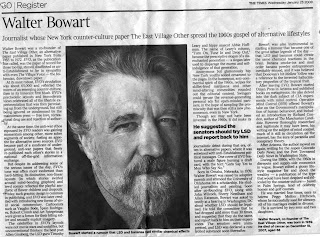 Reconnected with Bobby Kennedy, who I hadn't seen since McCarthy Committee days. LSD still legal, and arranged for Kennedy to get acid for trip prior to his holding hearings on subject. He wanted to know what it was, etc. Connected thru Walter Bowart of EVO, also we gathered much information for the Committee regarding youth and drugs etc.

‘We talked for several hours in his Central Park West apartment one morning in late 1966 or 1967. I was working on a study of LSD users and he was then proselytizing for acid with the same religious fervor he’d sold subscriptions to The Daily Worker in his Communist days, had been an anti-Communist in his informer days, and then an anti-anti-Communist in his post-informer days.

‘That afternoon, I described the encounter to Irwin Silber, editor of Sing Out! magazine. “Do I know him?” Irwin yelled, even though it was just two of us in the room “That sonofabitch turned me in!”

‘Later that day, I saw a musician friend, Hedy West, and I told her about the coincidence of my morning meeting with Matusow and Silber’s having been one of his victims. “Harvey Matusow turned my father in,” Hedy said."He testified that my father was organizing Communist Boy Scout troops in . They’d never met, but that didn’t matter to Matusow or the people he was working for. My father’s response was, ‘Where I was in Georgia, 12-year-old boys weren’t playing Boy Scout; they were working in the mines.’”

- Bruce Jackson: ‘Harvey Matusow: Death of A Snitch’
The main part of the article is an interview with filmmaker Emile de Antonio whose ‘Point of Order’ is considered the best documentary on McCarthy.
.’

Also began working with Deputy Mayor Marcus of , working on the problems of runaway teenagers, who we started to call Hippies who were flooding the streets of . Set up a hot line with others to deal with people who were having bad acid trips.

1964-1966: Following my "normal" life pattern of when in doubt, when at the emotional bottom, laugh your way back to balance. During my witness days I always had an outlet in night clubs doing sleezy stand-up comedy. Now did it again four to five nights a week on in the Village. Spent a lot of time with Dick Gregory, and many lonely nights at The Improv.

Reconnect with Andy Warhol, who I hadn't seen since pre-prison days when I was married to Ellen, and with him almost pulled off a hype on David Suskind. Suskind was doing a TV special on Beatnik artists. Using a Russian accent, from Andy's phone, I convinced Suskind that I was a Russian poet. Would have made the programme, but, one of the group who was in on the hype couldn't contain the secret [and] Suskind found out.

Started to make films. Worked with Yoko and her husband Tony Cox and film maker Peter Goldman and Emile d'Antonio. Worked with d'Antonio and and helped him mimeograph his book on Kennedy assassination [but] no one wanted to publish it.

Lane and d'Antonio invited me to a party in Great Neck, . Pete Seeger was the main attraction for this fund raiser for some decent humanitarian planetary cause. I was bored and tired of the rejection, and was reluctant to go. Mark and d'Antonio convinced me that it would be alright. I had not seen Pete Seeger since the McCarthy days, when I was the main cause of his blacklisting. I had no desire to confront him, but, I put my guard down and went. Pete was gracious, loving and forgiving. His wife was not, nor were most of the guests, who were horrified at my presence. The final straw, I left the , vowing "never to return." 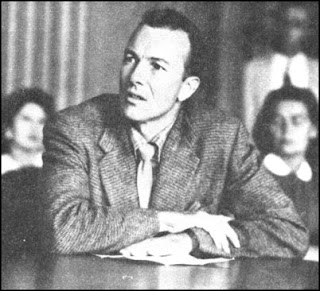 While working as an informant, Matusow provided information against folksingers. Pete Seeger's band the Weavers [who] went from a hit record with ‘The Lion Sleeps Tonight’ to being blacklisted and finding no work. Seeger later went to prison over his testimonies in the HUAC related witch-hunts but also forgave Matusow for his youthful mistakes and noted that Harvey never did more than cost Seeger a few jobs. ("The Lion Sleeps Tonight" was known at the time as "Wimoweh." Pete Seeger did not go to jail, though he was convicted for Contempt of Congress and issued a jail sentence.) [Wikipedia]

'[He] became a member of the Weavers, whose version of "Goodnight Irene," by Leadbelly, was, for thirteen weeks in 1950, the best-selling record in America. The Weavers quit playing in 1952, after an informant told the House Un-American Activities Committee that three of the four Weavers, including Seeger, were Communists. (Seeger knew students at Harvard who were Communists and, with the idea in mind of a more equitable world, he eventually became one himself.) Following the informant's testimony, the Weavers found fewer and fewer places to work.' [Source: ‘The Protest Singer: Pete Seeger and American folk music’ by Alec Wilkinson [The New Yorker 17th April 2006]