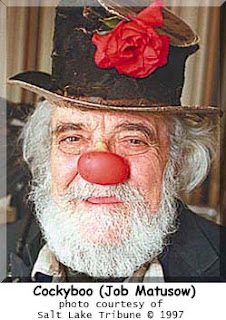 1973: Home from "exile", feeling strong and renewed. Coming home as a working artist, being in the moment - being part of an artistic team. Anna and I began to plan for concerts in the . I got Libby Owens Ford to prepare special glass with handmade carrying cases for the Glass Concert Tour. The kick- off was two live broadcasts on WBAI Music Store in , and after the second concert Anna and I parted…I left . 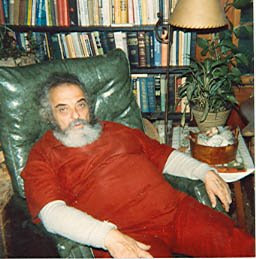 1974-1983: I went to visit a large New Age commune in western . The commune had started out The Brotherhood of the Spirit, and when I arrived it was calling itself Metelica’s Aquarian Concept Inc. Michael Metelica was a young teenager who founded the commune sitting in a tree house in the wooded . [He] needed help in producing a radio programme. It was mutually beneficial -- I could help them in their radio show, and they could afford me the quiet isolation. [Picture source] 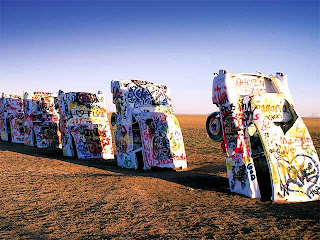 'Cadillac Ranch'
1974-1975: Connect with Boston-based macrobiotic newspaper The East/West Journal and soon found myself on their masthead as ‘Editor At Large’. Representing EW, I began to visit communes all over the country. Arrived in in time to help The Ant Farm plant Marsh III's Cadillac Ranch. Stanley and I had been good friends for a number of years, but he couldn't understand my going hippy and living like a gypsy on the road. Wandered the west, went to my first Rainbow Gathering. Reflection of the Love Family, the Gaskin Farm.

1974-1977: Using the commune as my home base, I started to explore Eastern thought. I had studied a lot of Zen while in prison…Although exploring the East, I did not give up my Mormon beliefs, but stayed away from the Church for two reasons. Firstly, I didn't want to face or test rejection, and felt that my lifestyle was too way out ever to come back into any normal balance with society. I had allowed myself to move further and further away from any mainstream balances. The other reason was that blacks could not hold the Priesthood. I made a vow that when blacks could become priests, I would once again be an active member of my church.

1975-1977: I met, fell in love with, and married Emily. When I met her she had never been in a city in her life; she lived off in the woods far from all neighbors. Emily and I formed a spiritual community, Ammal’s Garden, and took vows of poverty, which Emily insisted on calling "vows of simplicity." Our door was open to those whom society rejected. We financed it all with a small inheritance my mother left me when she died in 1975. But, not before I had taken Emily around the world -- first class. It was an adventure like none I had ever known. 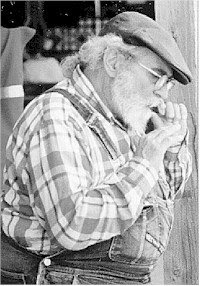 1977-1983: It was this quiet period in that got me into playing my bells once again. I had stopped and music and sound work after the split with Anna.

It was here that the Magic Mouse Theatre germinated and grew. The Theatre Company was born in a wooden shack that housed a school for mid-wives. I used this space, and the quiet of the early hours of the morning to practice my soft playing. I was alone usually, but occasionally played for a mid-wife on a middle-of-the-night home delivery run.

1977-1983: A strong mystical experience left no doubt in my mind that I must become and active member of my church, the of Latter Day Saints. Driving through the , I saw a sign, "House for Rent." I hit the brakes and rented the house. Discovered that the village was…one of the oldest Mormon communities in . Also found out that a few weeks earlier, the Church announced that blacks could now hold the priesthood. Now the one barrier I had about being an active church member was gone. Still concerned about my lifestyle and the clean-cut Mormon way. They had to clash - and did.

For a time in the 1980s (after his conversion to Mormonism), he was known as "Job Matusow [Wikipedia]

1981-1982: Emily and I enjoyed living in the desert, but our basic lifestyle hadn't changed. Magic Mouse Theatre grows. We got a sponsor, Truly Nolen, and had some economic stability and a brand new motor home in exchange for the old silver school bus. Emily really got into theatre, and pursued her character, the green-haired clown named Sparkles. Our work schedule: 144 school shows in nine months. …In 1980 Emily and I spent an aggregate of 108 days on the road, in our vehicle. Completed 126 five-minute radio programmes on Magic Mouse for local NPR station at the , and signed a contract to do a TV series for the PBS TV outlet. Magic Mouse became the "official" theatre company of the Zoo, and we performed every Saturday.

1982-1983: Back to . Soon started to feed the homeless, against the wishes of the City Fathers. Became deeply involved in social issues for the homeless, where we eventually turned our commercial cafe into a free kitchen. We left in a caravan of vehicles carrying homeless people: American Refugees in .

1983: The homeless of , and my attempts to get the White House to help. Finally reached Ed Meese, spoke to him for about 20 minutes; got promised but no real help.

1983-1986: Emily took sick while we were visiting and the doctor advised that she needed complete rest and caring for. We found and old farm house on a hill in , and I dropped all activities to care for Emily…Applied for food stamps and welfare for the first time in my life. I didn't want to, but needed to know what people get put through.

1985-1989: Emily's health… had improved enough for us to open our house to care-provide for a mentally retarded young man. Both Emily and I felt that a direction of our service should be focused on those who society rejects the most. And, within two months, we had our second young man living with us. It's now almost two years since we began this work, and can only think of ways to enlarge and expand it.

1985-1989: We sold the motor home and bought two old school busses. We began a food and clothing programme in the most economically depressed town in the state. In 19 months we put out over 225,000 pounds of food to about 800 families, and didn't spend a penny of governmental money, local, state or Federal. The life of service grew as I sank the root in Emily's forest. The food programme expanded into .

1988-1989: I was in on the Reservation when I found out that Emily had cancer. She had been wrongly diagnosed three years earlier. Stopped all work, devoted the next year and a half of my life to nursing Emily until she died in July of 1989.

1989-1992: Returned to . Ran a homeless programme at St. Francis in the in . Lived in my school bus at the church for 11 months. Was given an opportunity to run a near-derelict motel on the that had been superseded by the Interstate. For two and a half years I lived at the motel, serving poverty.

1991-1992: Met Lisa and marry. Changed my lifestyle. Shaved my beard and got a haircut for the first time in over 15 years. Back into show business full-time, as Cockyboo, the storyteller, so as to earn the money needed to do the service work that I still believe in and do as Director of Gandhi Peace Centre. Marriage doesn't work - Lisa and I divorce but remain close friends. 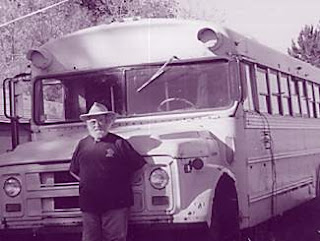 According to Stefene Russell in her article 'Voice from the Whirwind: Footnotes from the Book of Job' (18th June 2001)

'It was the calm haven of Glenwood that allowed him to found Sevier County Access Television, or SCAT-TV, which he still operates under the umbrella of the Ghandi Peace Centre. The Center is so named because the house and the property were a gift to Job from the Ghandi family (Yogesh and Job have done nonviolence work together for several decades). It includes the public access station, an informal animal adoption program, housing for anyone who finds him/herself at loose ends, a program to supply food and clothing to Indian reservations and a prisoner outreach program. This is also where Job makes his "peace bells," which he forges from melted-down munitions shells and bullet casings, with a few aluminum cans mixed in for proper texture.'

In 2001, he moved to , Hew Hampshire to run the town’s public access TV studio. Harvey Matusow died in from complications from a car accident in 2002.

Sources: Chronological entries: from the ‘Stringless Yo-Yo’ edited to correct mistypings and spellings, to shorten and, in a few cases, to make it read more fluently.

Begun in 1997, neither the book or the online version were completed by the time of Harvey Matusow's death. The website from which the chronological chapter outline notes are drawn, can be found here.

* Wikipedia says he was married twelve times to eleven women. One wedding was in a helicopter over , another was in a piano factory.