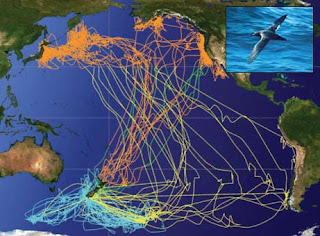 A map depicts the migration of 19 sooty shearwaters that were tracked using electronic tags in a recent study. The research showed that the birds (pictured inset) migrated 40,000 miles (64,000 kilometers) a year, flying from to the North Pacific and back. It is the longest animal migration ever recorded electronically.Map courtesy: PNAS/Inset photo courtesy Steve Shunk/USGS
Source: National Geographic

World On the Move (running at 9am, BBC Radio 4) is, apparently, 'the largest radio project ever undertaken by the BBC's natural-history unit: a 40-week series tracking animal migrations, from elephants in Africa to whales off . Some species have been tagged and can be followed by satellite; others will be pestered by reporters, conservationists and (you gotta love this term) "embedded zoologists". It all kicks off with an introduction from Brett Westwood and (making her own migration from TV) Philippa Forrester.' This was the entry in The Guardian in February.

I wonder if they mention 'No Way Home:The Decline of the World's Great Animal Migrations' by David S. Wilcove. [Island Press. 256 Pages. $24.95]. According to the New York Times review:

'David Wilcove, a Princeton biologist, warns that “the phenomenon of migration is disappearing around the world.” Despite their huge numbers, migratory species are particularly vulnerable to hunting, the destruction of wild habitat and cliamte change. Humans have already eradicated some of the world’s greatest migrations, and many others are now dwindling away. While many conservation biologists have observed the decline of individual migrations, Dr. Wilcove’s book combines them into an alarming synthesis. He argues that it is not just individual species that we should be conserving — we also need to protect the migratory way of life.'