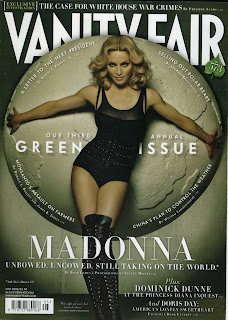 As is becoming traditional at The Generalist: a review of the annual 'Green Issue' of Vanity Fair, an interesting mainstream barometer of front-running concerns and issues, containing the following pieces:

'Industrial Revolution: Take Two' a profile of William McDonough, by Matt Tyrnauer. This is the most extensive piece I have yet seen in print on McDonough, an extremely influential and important figure in the new industrial revolution of green, energy efficient, low carbon technologies.

His ideas are captured in an important book 'Crade to Cradle: Remaking The Way We Make Things', written with Michael Braungart. [North Point Press. 2002], which is, incidentally, manufactured from fully-recyclable plastic resins.

The book's central premise is the idea of "planned nonobsolescence": all things manufactured should be designed from the outset with the intention that they will eventually be recycled, either back to the soil, harmlessly, or into some other product. In their world WASTE EQUALS FOOD.

McDonough is an American architect who was born in Tokyo and grew up in Hong Kong, Canada and the US; Braungart is a German chemist who was a founder member of the Green Party. Their company advises corporations and governments how to implement "cradle to cradle solutions" and are currently designing master plans for the development of seven Chinese cities. Their alluring vision is of cities which are like dense "forests" 'with each building supporting - literally - farmland made of native soil. McDonough has lifted up the earth and put it several stories above the streets.'

"China is going to house 400 million people in the next 12 years, so imagine that," says McDonough. "You know, it's like rebuilding the entire United States in seven years - all the housing here. They've made brick illegal in 174 jurisdictions, because they're afraid of losing all their soil and burning all their coal making brick. So we have to look at new materials; we have to look at new startegies.

[The majority of quotes and ideas in the article you will also find in the video of McDonough's stirring presentation at the 2005 TED (Technology Education Design) conference, a wonderful source of fresh thinking and new ideas]

McDonough and Braungart were selected as one of the 'Heroes of the Environment' in Time magazine's special issue [Oct 29 2007] which is now online.

This issue of Vanity Fair also carries a piece on the greenest museum ever built - the new California Academy of Sciences building in Golden Gate Park - designed by Renzo Piano. It has a 2 1/2 acre living roof and will open on Sept 27, 2008.

Monsanto's Harvest of Fear by Donald L. Barlett and James B. Steele is a first-rate piece of extensive investigative journalism into the venal behaviour of one of the world's most rapacious corporations, who are buying up the world's seed banks and trying to control the world's food supply. They have undercover teams harassing farmers across America. This is essential reading. For those only familiar with the GM activities of Monsanto, this article will bring you up to speed on Monsanto's dark history.

Founded in 1901 by John Francis Queeny, 'a tough cigar-smoking Irishman with a sixth-grade education', who began by manufacturing saccharin, the nascent enterprise was kept afloat by one loyal customer - a new company in Georgia called Coca Cola. Monsanto then began manufacturing vanilla, caffeine, drugs used as sedatives and laxatives and, in 1917, started making asprin and soon became the largest maker worldwide. When World War I cut off its supply of Europedan chemicals, the company began manufacturing its own and became a leading force in the chemical industry as a result. 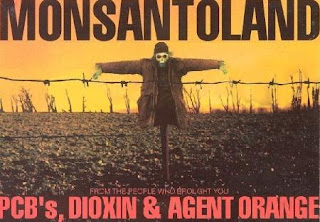 Queeny's only son Edgar took over the company in the 1920s and he expanded it into a global powerhouse producing a huge number of products including fertilisers, herbicides and pesticides. 'For many years Monsanto produced two of the most toxic substances ever known - polychlorinated biphenyls, better known as PCBs, and dioxin. Monsanto no longer produces either, but the places where it did are struggling with the aftermath, and probably always will be.'

One example of their plant in Nitro, West Virginia, which ran from 1929-1995. In 1948 the company began to make here 2,4,5-T, a powerful herbicide which creating dioxin as a by-product. On March 8th, 1949, a container cooking upa batch of the herbicide exploded. Court records indicate that 226 plant workers became ill as a result. In the 1960s, the plant went on to produce Agent Orange, 'the powerful herbicide which the US military used to defoliate jungles during the Vietnam War, and which later was the focus of lawsuits by veterans contending that they had been harmed by exposure.' See extensive Wikipedia article here.

Stealing Weather by William Langewiesche is an extraordinarily interesting piece on weather modification, both the history of the subject and the extensive use to which the Chinese are now putting it. 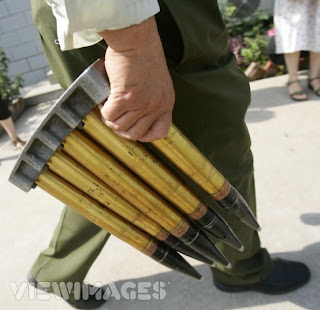 According to the Chinese Meteorological Administration (CMA), local weather- modification offices all over this vast country now have 39,000 field operatives, equipped with 7,113 anti-aircraft cannons and 4,991 truck-mounted rocket launchers.

'In 2006 they fired a million rounds at the weather, and launched 80,000 rockets. For the most ambitious efforts, they had access to 35 specially equipped airplanes, which that same year flew 590 sorties, dispensing 26,158 pounds off dry ice, 1,487 pounds of silver iodide, and 2,300 gallons of liquid nitrogen. All together the operators claimed to have covered more than a third of China's landmass, excluding Taiwan.'

[Always found it fascinating that Kurt Vonnegut's brother Bernard, was a cloud-seeding pioneer who worked at General Electric alongside Vincent Schaefer and Irving Langmuir, from whom the initial idea came that led to Kurt's novel 'Cat's Cradle'. 'Vonnegut came across a story of how Langmuir, who won the 1932 Nobel Prize for his work at General Electric, was charged with the responsibility of entertaining the author H.G. Wells, who was visiting the company in the early 1930s. Langmuir is said to have come up with an idea about a form of solid water that was stable at room temperature in the hopes that Wells might be inspired to write a story about it. Apparently, Wells was not inspired and neither he nor Langmuir ever published anything about it. After Langmuir and Wells had died, Vonnegut decided to use the idea in his book Cat's Cradle' [See complete Wikipedia entry here]

Also two excellent articles on the moves by Russia and the US to exploit energy reserves in the Arctic: The Arctic Oil Rush by Alex Shoumatoff ('If Russia starts tapping the Arctic deposits, it jmay become the world's dominant energy supplier') and The Edge of Extinction by Michael Shnayerson (a recent $2.66 billion oil-and gas drilling lease sale will further doom the US polar bear).
at 10:36 am