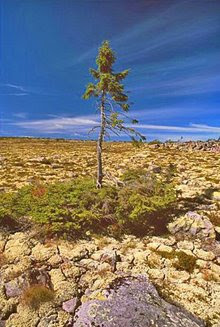 World’s oldest living tree discovered in Sweden
Seven days ago, scientists announced their discovery in the Swedish mountains, which run from in the North to Dalarna in the South, of a cluster of around 20 spruces that are over 8,000 years old, One of them has been carbon-dated at being 9,550 years, making it the world’s oldest tree.

(The previously-known oldest trees were bristlecone pines in , which have been dated at 4-5,000 years old.)

A single spruce tree trunk can only live, at most, for about 600 years but they are able to clone themsleves and thus survive by pushing out another trunk as soon as the old one dies, says Professor Leif Kullman, Professor of Physical Geography at Umeå University.

Under the crown of living spruce trees on in Dalarna, they found the remains of four generations of these same trees, in the form of cones and wood. The genetic material of the living trees matched the ancient remains.

For many years, the spruce tree has been regarded as a relative newcomer in the Swedish mountain region. ”Our results have shown the complete opposite, that the spruce is one of the oldest known trees in the mountain range,” says Prof. Kullman.

As a species, spruce may give us fresh insights about climate change. The trees have survived harsh weather conditions for almost 10,000 years, enduring as bushes maybe only half a meter tall. "But over the past few decades", says Kullman, "we have seen a much warmer climate, which has meant that they have popped up like mushrooms in the soil." 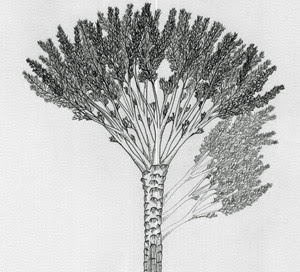 [Right] A reconstruction of how the crown portion of Wattieza would have looked in life. Frank Mannolini/New York State Museum

A year before, on April 19th 2007, palaeontologists Linda VanAller Hernick and Frank Mannolini described in Nature, their discovery of the first complete fossil of the world's oldest tree - a primitive 380-million-year-old plant, eight metres long, resembling a modern palm or tree fern.

The story began in June 2004, when Hernick and Mannolini of the in , found the fossilised crown of a massive tree in a small sandstone quarry in . The site had already been a fruitful spot for retrieving fossils of plants and arthropods. A year later, they dug out a trunk of the same species, extracting it fragment by fragment and reassembling it like an eight-metre-long fossilised jigsaw puzzle.

The find also solves a 137-year-old mystery. A "forest" of fossil stumps were discovered at a site just 16 km away in 1870, and had perplexed generations of botanists ever since. Without the upper sections of the trees, experts were unable to accurately identify the species.

"Now the riddle is solved," with the discovery of a matching upper portion, said VanAller Hernick. "We know what was out there."

Now they confirmed it as the Wattieza species, which dates back to the Devonian period (415 to 360 million years ago), an era in which the world's primitive land plants first developed characteristics associated with modern-day trees - such as taller trunks, more diverse reproductive methods and the first signs of leaf development. This was also the period when the first seed-bearing plants spread across dry land to form forests. Wattezia itself did not bear seeds but reproduced with spores, like today's ferns.

Until this new discovery, the oldest known entire tree was Archaepoteris, a close relative of seed plants, which flourished in the late Devonian period. The Gilboa tree differs from this later species in having a smaller trunk, a more limited root system and in lacking horizontal branches and fully-developed leaves.

SERENDIPITY: Earlier today, discovered the full and fascinating story of the rediscovery of the world's first photograph.
at 3:37 pm