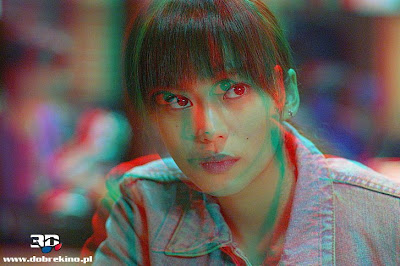 Browing through the Hollwyood Reporter site at random last night, as you do, interested to learn that we are on the edge of a 3-D movie revolution.
"In five to seven years, all films, regardless of budgets or type, will be made in 3-D," says Jeffrey Katzenberg, the DreamWorks Animation boss during his keynote at the inaugural 3DX Film and Entertainment Technology Festival in Singapore, which opened today. "3-D is how we see, how we take things in. It's natural," Katzenberg said. "This is not a gimmick, it's an opportunity to immerse the audience, to heighten the experience." He added that the migration to 3-D will happen on all screens, including mobile phones and laptops. Walt Disney Studios Motion Pictures Group president Mark Zoradi and others are stressing the industry's commitment to 3-D as the future of film.

Producer John Landau, now working with James Cameron on "Avatar," said that 3-D would "do for cinema what stereo did for the audio industry." All the film industry has to do is "demystify" 3-D for consumers, whose perception of 3-D may be of "gimmicks on B films" and "theme parks that forced things off the screen," Landau said.

All apeakers agreed that 3-D's ability to immerse audiences in the film is the key and new 3-D benefits from a range of technical advances that make it box-office gold - although the
installed base of digital cinemas is the biggest barrier to achieving a mass market.

The IMAX projection and film making system suffered from similar problems in their earlier years Imax is now converting hundreds of its auditoriums to digital projection in a transition to digital 3-D exhibition.

Bankers at JPMorgan are preparing to raise debt of about $1bn to fund the installation of digital systems in up to 20,000 North American cinema screens,' says Financial Times Deutschland' reporter Matthew Garrahan. There are about 1,300 3-D screens in the US at the moment.

'The cost - about $70,000 per screen - will initially be borne by the US cinema chains that are part of the Digital Cinema Implementation Partners consortium, which has enlisted JPMorgan to raise the money. '

If successful, this 'will become a turning point in the entertainment industry because it will pave the way for the mass adoption of 3-D cinema, a consistent crowd-puller.'

'The studios are confident the financing will succeed and trigger a transformation which some say will be as profound as the addition of sound in the 1920s and the introduction of colour in the 1950s.

One of the key films of this new revolution will come in early 2010 with Avatar, a live-action 3-D film from James Cameron, which will cost $220m+.

All DreamWorks Animation films will be released in 3-D starting next March with Monsters vs Aliens .