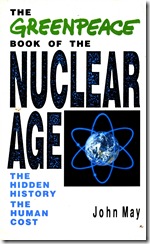 The results of a BBC investigation, broadcast this week, revealed that the United States abandoned a nuclear weapon beneath the ice in northern Greenland following a crash in 1968.

This story did not come as a complete surprise to The Generalist, as we covered the majority of the story in an essay written by journalist Jon Trux for 'The Greenpeace Book of the Nuclear Age' published by Gollancz (UK) and Pantheon Books (US) in 1989, as well as in Germany, Greece and Japan. The book was the most comprehensive list ever published of both civil and military nuclear accidents at that time.

Our account was based on the official USAF report on the incident, published in 1970, together with numerous press reports from the mid-1980s regarding efforts by former Danish workers involved in the post-crash clean-up (Project Crested Ice) to claim compensation for the health effects they suffered. After an official Danish investigation, using secret documents sent to them by the US Department of Defense, their claims were denied.

'In December 1987, a Danish civil engineer involved in the cleanup revealed that a secret, highly sensitive film in the Pentagon archives - shot from a miniature US submarine during the initial search - showed one of the H-bombs from the B-52 lying intact on the sea-bed off Greenland.

'Greenland MPs demanded that the film be brought to Denmark for viewing by government representatives...A pentagon spokesman responded by quoting from a Department of Defense statement issued at the time of the accident which said that fragments of all four bombs had been found and identified by serial numbers matching those in SAC files, thus making it 'impossible for one or more of the bombs to have gone through the ice.'

A pdf of the GP Book of the Nuclear Age can be found here. The Thule story begins on p120. This pdf appears to be the whole book minus, maps, illustrations and references. You can still buy both the complete English and US editions on Amazon and AbeBooks.

The latest revelations come from declassified documents obtained by the BBC under the US Freedom of Information Act, which make it clear that 'within weeks of the incident, investigators piecing together the fragments realised that only three of the weapons could be accounted for.

Even by the end of January, one document talks of a blackened section of ice which had re-frozen with shroud lines from a weapon parachute. "Speculate something melted through ice such as burning primary or secondary," the document reads, the primary or secondary referring to parts of the weapon.

By April, a decision had been taken to send a Star III submarine to the base to look for the lost bomb, which had the serial number 78252....but the real purpose of this search was deliberately hidden from Danish officials. ' The BBC say that the search was abandoned without finding the missing bomb.

For full text see: 'Mystery of lost US nuclear bomb'

A petition was presented to the European parliament from former clean-up worker Jeffrey Carswell, appealed for pressure on Denmark to start monitoring the health of those exposed to contamination. The US workers involved have been regularly examined, but the Danes and Greenlanders have not, according to a report by Diana Wallis MEP, which the parliament approved by 544 votes to 29. "Many Thule survivors have died of radiation-related illnesses due to the lack of medical monitoring, and current survivors risk contracting such fatal illnesses," says the accompanying resolution. It calls on the Danish government to start health checks now.

See Full story: Denmark challenged over B52 crash by Stephen Mulvey [11 May 2007]

The Airborne Alert Program over Greenland (The Nuclear Information Project)

Broken Arrow - The B-52 Accident on the Thule Forum, a site for people who stayed at Thule Airbase, Greenland.