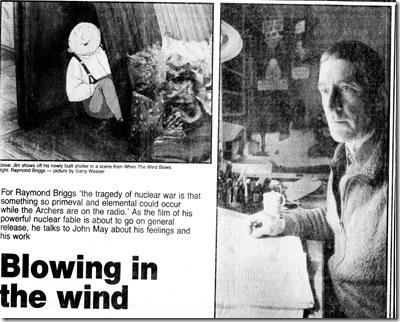 What I remember most vividly of 13 January 1987 was battling through a snowstorm to Raymond Brigg's hideaway studio in East Sussex, to conduct an interview for The Guardian, which was published on Jan 28th that year. The piece was timed to coincide with the release of the animated feature of Raymond's classic 'Where the Wind Blows.' Hope you enjoy reading it 30 years on.

NESTLING at the foot of Ditchling Beacon in the South Downs, in a narrow lane off a twisting B-road, stands the home of a man whose powerful yet decep­tively simple talents have caught the imagination of millions of children and adults alike.

Raymond Briggs has just returned from Italy, where he has been working on proofs of his latest book, to find his water frozen up. Much of his dark wood and brick open-plan house is heavily curtained off against the cold. He appears to live in his cosy, cluttered workroom, dominated by a large desk, stacked with the tools of his trade, with a view through a picture window onto snow-covered fields. On a hob by the side of the fireplace, a large kettle sings and his cas­serole is slowly cooking.

Traces of the creatures of his imagination poke out from every corner. Tea is served in Snowman mugs, part of a merchandising bo­nanza that has clearly gone beyond a joke for its creator. He is not ungrateful but he admits to filling up two large rubbish bags with Snowman paraphernalia, and stowing them in the attic.

A widower, just turned 53, Briggs lives a lone existence, but his fantasies and night­mares and distinctive sense of humour are shared by mil­lions, an audience that's rapidly expanding as his work is interpreted in other media. 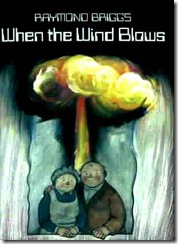 The brilliantly realised 85-minute animated feature film of 'When The Wind Blows', is just the latest manifestation of his powerful nuclear fable, which has provoked praise and controversy ever since its first appearance in 1982.

"I was bowled over by how popular it was," he says. "I thought that very few people would be interested in it apart from the peace move­ment. I never dreamt it would be a bestseller and go on the way it has. On the face of it, it's rather a depressing story obviously. It concerns two rather uninteresting, fairly unattractive people. There's no sex in it, no young people, yet it seems to be amazingly popular."

The book changed Briggs himself from "a normal defence-policy-type person" to a supporter of CND and Greenpeace. 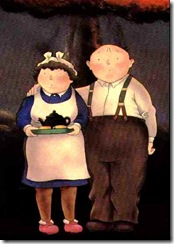 He has said that living with the Bomb is like "contemplat­ing your own death. When my wife died suddenly it made me think about my own death a lot You think, oh why go on bothering to weed the gar­den? But you still go on."

For him 'the tragedy of nuclear war is that something so primeval and elemental could occur while 'The Archers' are on the radio and the milkman is whistling up the garden path."

'When The Wind Blows 'captured this feeling but, with the benefit of five years hindsight, he now thinks the book's humour is "a bit facetious, silly and possibly a bit patronising".

A writer in The Listener described Briggs as a 'coy activist, floating social protest into the mass media, un­detected by those who would still, today, ban 'The War Game'. How did he feel about that view of him?

"Did he say that. Good God. Blimey. I don't remember that. I can see what they mean but I don't think of it that way. I'm only concerned with getting the work done, getting it down on paper, get­ting it tidied up so you can get rid of it out of your head. What happens to it after that is another matter.

"I mean it's like when David Hockney does a paint­ing. Presumably he doesn't want to convert the world to swimming pools and bronze Califorman boys. He just paints what he wants to paint and is interested in getting it right"

A fan of Krazy Kat, Rupert and Desperate Dan, Briggs turned from conventional book illustration to the comic strip format for purely practi­cal reasons with his grumpy but good-natured 'Father Christmas' books.

"I normally had a 32-page picture book and I wanted to do a lot more than 32 pictures so I ended up with what turned out to be a strip car­toon. Strip cartoons are looked down on in England as a culturally inferior artform but I think that 'When The Wind Blows' at least showed that strip cartoons can deal with a serious sub­ject. It doesn't have to be about violence or comic cuts. It's just as good a medium as a film really if it's used properly."

Thinking about it, the strip cartoon is at the interchange between a lot of different mediums.

Briggs rails against the "boringness" of illustration. He says: "What I like about writing is the fact that it's all cerebral, it's just in your head, whereas with illustrat­ing you're making a physical object all the time. Everytime somebody speaks you've got to draw his face, draw his eyes, colour in his cheeks, colour in the pattern of his shirt, paint the shirt buttons. It's a day's work just to get one figure nicely painted, that's the frustration."

"I'd like to do more writing and radio in particular. It's a 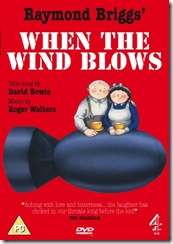 marvellous medium, so simple and so elegant. Six or seven people made the radio play of 'When The Wind Blows' in two days whereas 180 people took two years to make the film. There isn't all that fuss like there is in the theatre, with first nights and flowers for the leading lady and dinner afterwards and all this 'Oh Darling!' stuff.

"I used to despise all that incidentally but I now know why they do it It's because it's so bloody terrifying and everyone's trying to bolster one another's confidence. What I like about books is that you are in control of the whole thing whereas in theatre you have no control at all.

"I went to a production of 'When The Wind Blows' in Berlin and if I hadn't known it was my own book I wouldn't have recognised it It was just unbelievable. They had Hilda and Jim dressed up as clowns. Jim had a ginger wig on down to his shoulders, a bright emer­ald green jacket, red trou­sers, huge buttons and clown eye makeup. There was all this circus music going on even when they were dying towards the end." 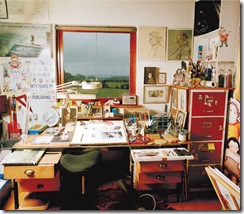 This picture of Raymond Briggs' studio appeared in The Guardian series 'Writer's Rooms' on 14th December 2007.

Young Raymond Briggs grew up in Wimbledon before the Second World War. His father was a milkman and his mother bears a strong resem­blance to Hilda Bloggs. He was always good at English and art at school but he wasn't bookish. When he was ten he wanted to be a news­paper reporter; at 13, a car­toonist. When war came he was in London for a bit of the "buzz bomb things" before being evacuated to Dorset

At a local art school he received an old-fashioned training in tone, colour and figure composition before being called up for National Service. It was an experience he never forgot.

"It was the epitome of everything I hate; I think, the worst possible thing for a person of my temperament as I like being alone, I'm very keen on privacy and that's one thing you don't get in the army. The only time you're on your own is in the lavatory and even then there's some­body pounding on the door. So that was hell on earth.

"I didn't, realise I was the slightest bit unusual but a lot. of the blokes there were amazed when I said I'd left school at 15 and done four years in art school. They were aghast and indignant and when I told them I was going back to college for another two years they simply couldn't believe it

"One said why should he pay for my education. I thought why should you, that's dead right. There's him paying taxes which indirectly went to keep me in relative idleness."

"That's probably what annoys me now with students when I see them wasting their time. (Briggs teaches part-time at Brighton Poly­technic.) They're being given this huge amount of money that comes out of other people less well off than themselves. I'm all for students paying their grants back actually."

After National Service, Briggs enrolled at the Slade where amongst his contem­poraries were the painter Patrick Proctor and the writer David Storey. "Dave was never there, he was busily at home writing novels, I remember he did a picture called Spring Land­scape which was just a mess of green with a bloody spring stretched across it"

The highlight of that period was a review by John Berger of one of his paintings, sub­mitted to an exhibition of student work, called, 'I Am On The Catterick Flyer', an Army picture of the weekly overnight journey from King's Cross back to the barracks. He has still got the yellowed press cutting stuck in a book somewhere. "He wrote great paragraphs about it, about Picasso, Caravaggio and me. Bloody hell. I get goose-flesh reading it"

Berger's review was not the key to instant success how­ever and Briggs spent years as a journeyman illustrator. "It was so exciting when you left art school. After six years of just doing these endless bloody paintings and putting them away afterwards, show them to your mum, your girlfriend and that was it stick them in a cupboard and forget them, suddenly you start doing commercial work and there was this man actually waiting anxiously to see what you've done. On top of that, he was going to give you money for it. That was even more incredible. I found that very inspiring really. It became real for the first time.

He says he is not conscious­ly aware of drawing from his own childhood experiences. He just starts with ideas that interest him and the book finds its own readership, increasingly now among adults as well as children. 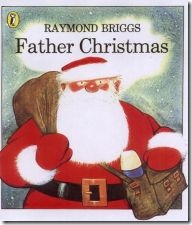 "When I did 'Father Christ­mas' I'd been doing children's books for years and just assumed this was another one. Then at signing sessions people came up and there were traffic wardens, police­men, bus conductors and all sorts of people. That was a big surprise.

"All these books are done on the same principle, just taking something that's wholly imaginary like Father Christmas and saying right, let's assume he does exist. He's got to live somewhere he's got to go to bed and get up and do all things everyone does. It's a working class kind of job. I couldn't imagine him married with children, didn't want to tackle his bloody elves and all that side of it. I just treated it as a normal work­ing job."

His new book 'Unlucky Wally' is a return to Bogeyman territory. "Fungus started with lots of unpleasant things in everyday life and then a character emerged to hold them together. With Wally I started thinking of pet hates like treading on a jellyfish, fleas in a bed, people eating tapioca and getting earwigs in their ears. These silly sort of joke horrors. These had to happen to somebody so this bloke evolved."

So is it a way of exorcising these horrors for himself? "I don't know. No, Just for amusement I think. I don't have any overall plan, any intention. An idea comes into your head and you just do that" 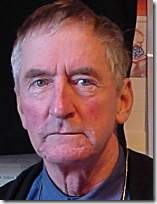 A 2004 photo of Raymond Briggs from www.achuka.co.uk . This includes an audio interview.

Extensive bibliography on the Magic Pencil, a British Council site.