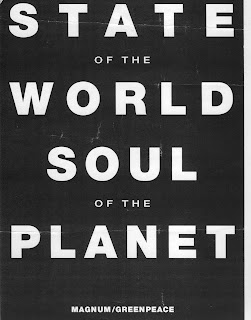 I always jokingly say that one of my main claims to fame is that I bought Al Gore lunch. I have written extensively on this in a Previous Post (I Bought Al Gore Lunch: Real As Rain) and the audio version of the interview is available on The Audio Generalist, so that you can also actually hear Gore having his lunch!

Another equally important claim would be that I had lunch with Henri Cartier-Bresson in Paris - a day I shall never forget.

What follows is a brief version of a much longer story, concerning a joint book project between Magnum Photos and Greenpeace in which is was heavily involved. Have recently catalogued all the notes, correspondence, diary entries and other material related to what would have been an extraordinary book.

'State of the World/Soul of the Planet' was the title of what was to be a large format photobook featuring the work of a huge number of stellar Magnum photographers, combined with quotes and texts from leading world writers, statesmen. artists and the like, designed to raise funds for Greenpeace and to create a broader awareness of the issues they were tackling.

The idea came first in a letter (7 Nov 1990) from Chris Boot who hatched the basic project in conjunction with Myron Blumenthal, a lawyer whose clients at the time included Greta Scacchi and Maeve Binchy and who had previously worked with Greenpeace on the Rainbow Warrior album (another whole story to be told). Chris had been making photo-books and producing photography exhibitions and events since the mid-1980s, became Director of Magnum Photos, later Editorial Director, Photography at Phaidon Press and is now an independent publisher of photobooks.

As Editorial Director of Greenpeace Books I was soon drafted onto the project and had my first meeting with Magnum on 2th Feb 1991. Sometime in March, the late David McTaggart, then Chairman of Greenpeace International, was with me for a meeting with Magnum at which the legendary Eve Arnold (probably most famous for her Marilyn Monroe pictues) was present. I had to meet with her and others on March 19th to outline my ideas for the book. My diary notes describe the meeting as 'nerve wracking.'

[At this point, it is worth noting that both organisations were complecx. Magnum, an association of some of the world's top photographers had its own internal politics, as did Greenpeace, which by that time had offices around the globe, all of whom would have to be consulted on the project. A diary note, shortly after the meeting above, reads: ' Private out-of-office meeting with Neil to inform him of internal political problems.']

On 17th May I met Thomas Hoepker who had been appointed by Magnum as the main editor of the book. On 27th May I attended the annual Magnum party, on the night of a full moon, where
Sebastião Salgado and Elliott Erwitt were in attendance amongst others, and I met the wonderful and charming man René Burri , who, I recorded in my journal, 'told me to hold on to my vision and not to let anyone distract me.'

On July 1st came a summit meeting between the two sides, with amongst others, Chris Steele Perkins and Leonard Freed (who died in 2006) in attendance. Note says: 'We now need to move to presentation.'

By 11 July I was in Paris for discussions with the Magnum office there. Six days later came further meetings then went off with René Burri to La Défense on the edge of Paris, which he was documenting. He also took pictures of me. Back at the Magnum office met Leonard Freed again, Joseph Koudelka and Miguel Rio Branco. My notes say:' The four of us had a long conversation.'

The following day was the red letter one. The day I went for lunch with Cartier-Bresson, to whom I had to pitch the project. With him on-board, the whole thing could move forward. At the table were Martine Franck, René Burri , and Dianne from the Magnum office. As I remember it the office was in a fairly rough part of Paris. My brief notes read as follows:

'HCB: Indefatigable. Striding ahead of us down the street. His little rucksack on his back with a Smiling Sun 'Non-Nuclear' button attached to it. Dressed in fawns and browns. Windcheater. Scarf fastened at the neck with a toggle or brooch. Little wire glasses. Bright eyes. Just had an operation for a cataract on one eye. Saw beautiful colours he tells us.' He was 83 at the time.

I was more than a little nervous as I sat down at the table in the small Chinese restaurant opposite the great man. I remember he order a Sichuan beer and as he tasted it he said it took him back to his days in China. The meal progressed amiably until the time came to deliver my proposal for the book. I looked into his eyes and launched into my presentation. When I finished their was a brief pause, HCB lost in thought. Then he finally said: "We are the horses, you are holding the reins."

I was taken aback by this remark, nodding with a smile on my face whilst my brain raced to try and work out whether that was good or bad, what such a phrase meant and what the implications were. Then, my notes say, he said: "You must work closely with us." Notes says he was 'charming but stern'. We discussed schedules and costs. I had succeeded. Later HCB announced that he would come out of retirement (at that time he had given up photography in favour of drawing) to work on the book. What a coup.

Just to make the day more magical, René Burri drove me and his young assistant from the restaurant to La Défense where, we walked to the grand arch, took a lift to the roof, showed our special passes and stepped out beyond the security barriers. Literally the whole of Paris was there stretched out at my feet. I felt like a king of the world. My journal says: 'These notes are written literally on the edge of La Défense arch.'

Later that night I had supper with René and Clothilde - the most beautiful apartment and gorgeous food - whilst we listened to John Surman and he told me many a story which I will save for another time. One detail here is relevant. Notes say: 'Tells me of his long love-hate relationship with Henri. How at one of the Magnum meetings, he had arrived late after a helicopter ride across New York. Henri kicked him in the butt; René held him out of the window.'

It would be great to say that this story had a happy ending. I have the fax sent to me on Sept 17th 1991, addressed to Eve Arnold, myself and Neil Burgess at Magnum, from Thomas Hoepker, recounting the four meetings that he and David McTaggart has with US publishers in New York - with Sonny Mehta at Knopf, with Meirs at Norton, with Linda Tabori at Collins and at Doubleday [at the latter meeeting Jackie Kennedy/Onassis was present.

The upshot was a big No. The project was expensive, the market was low, the book didn't fly. An great opportunity missed but an experience I will never forget.

Henri Cartier-Bresson, still considered one of the greatest if not the greatest photographer, a founder of modern photojournalism and the highly influential style of 'street photography' he mastered, died on August 3rd 2004.
at 6:26 pm