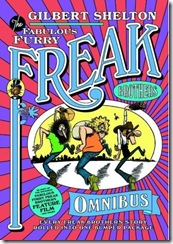 I was in my local comic shop in Brighton browsing the shelves and saw the new bumper collection of 'The Freak Brothers Omnibus' (published  by Knockabout Comics), inside of which was a leaflet for the long awaited FFB movie, which encouraged you to donate or invest to complete what could be an animated gem.

The movie 'Grass Roots' was first announced in 2000. There is a great trailer on YouTube using excellent  model animation. It looks like fun but since then, no news. 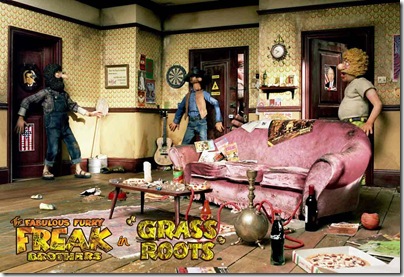 This all reminded me that I'd interviewed Shelton in our office at 2 Blenheim Crescent in Ladbroke Grove back in October 1979 and written it up for the NME. So I dug it out of the files, scanned it and here it is. It confirms that there's been talk of making some movie based on Shelton's irresistible pot heads for almost 30 years!!

Gilbert Shelton in person would come as a surprise to most of his legions of fans. The man who created The Fabulous Furry Freak Brothers, Fat Freddie's Cat and Wonder Warthog is rather shy and retiring, wears his hair short and dresses in corduroy jackets. There's little outward sign that here lurks the brain and hands responsible for a thousand drug-soaked fantasies, for creating those archetype figures of the Drug Culture.

JM: We've heard various reports about a Furry Freak Brothers film. Is this now a reality?

GS: "Yeah. Universal Studios have purchased the film rights to the Fabulous Furry Freak Brothers and it's going to be produced by Tom Nolt (?) and the screenplay will be written by B.W.L Norton (?), as he is known. He'll also be the director. Dave Sheridan, my former partner in the drawing of the Freak Brothers is going to be technical adviser but I'm going to be in Europe till its over with."

How did the Furry Freak Brothers begin?

"That was a long time ago when the Freak Brothers started around '68 or '69 and I just did a few now and then. They would be published in various underground papers and, after I'd been doing them for a couple of years, I started my own publishing company, gathered them all together, and published them in a comic book. That one book is almost ten years old now and it's still selling at the same rate that it always was."

Were the Freak Brothers based on anybody you knew?

'That would be hard to say. There's probably some real people involved but they probably wouldn't want their names to be known now. But if real people did what the Freak Brothers do, they couldn't have lasted all this long. They would have been dead by now.

I occasionally get letters from people, and pictures, saying: "Is your model for Fat Freddie so and so from Orlando, Florida. I'm sure it is because he lives down the street from me."

When I was publishing the Freak Brothers weekly in the Los Angeles Free Press back in 1971 I thought I was going to produce a Freak Brothers movie myself and I advertised a look-a-like contest and also printed letters which I would hand-letter, recopy and type at the bottom of the comic strip. I never really judged it, there was never a conclusion, but there were some remarkable entries."

What about the cat? How did he come about? 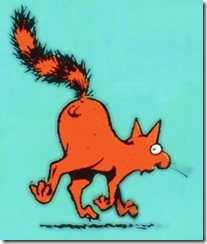 "The old-time newspaper strips in the States used to have a big strip that would cover most of the page and then a small one that was related at the bottom. There was Mutt & Jeff who sometimes had a related strip called Cicero's Cat, the cat with the human face, like Fat Freddie's Cat. That might have been my inspiration."

You don't have a cat yourself it was modelled on?

"No. I knew some, they're dead now. Eaten by dogs. Smashed by cars. Cats don't live forever, especially tomcats that get out and run around. We do have a cat back in San Francisco but it's a little old lady cat."

Were you surprised at the way the Furry Freak Brothers grew in popularity?

"I still don't know what there is special about it. Maybe just the bulk of it makes it into an epic. Maybe some people aren't aware that it took longer to draw than it does to read it."

How do your produce a strip?

"It can happen any way. In my case I'll hunt for one funny idea and build it. If the idea's in the middle, fine. If it's at the end, fine. You just build around it. You write it backwards a lot of times, building to a funny point at the end. Because it has to come out the proper number of squares — that makes it different than prose. It makes it a little bit like a portrait, where you're bound by special rules. The lines have to come out even."

The Freak Brothers have always stayed in the same place and time. Do you ever feel you would like to change that?

"I think about it sometimes but actually I try and keep the ambience ambivalent as possible, just because less is more and ambience is hard to draw.

But when the Freak Brothers first came out, it reflected the mass culture of the time, but that has now moved on to disco and God knows what else.

Actually now that decision whether to modernise the Freak Brothers might be up to Rip Off Press. I myself, rm not^sure. I want to see what the movie does to the image of the Freak Brothers because the movie will probably be seen by more people than the books, which sold a million or more. But how many people go see a movie? More than a million."

Do you ever feel trapped by the characters you've created?

"I haven't let it get in my way too much but there are other things I would like to do. For the last three years I've been working on a new Wonder Warthog book. I would like to hype that now. One chapter from it will be published here by Hassle Free Press entitled 'Philbert Desanex's One Hundredth Thousandth Dream'. Philbert Desanex is Wonder Warthog's altered identity. It's a forty-page comic book of one continuous dream.

"I'll just keep doing comic strips as far as I know. Occasionally the idea crosses my mind of maybe doing musical comedies, musicals, that sort of thing. Movies are scary. As its done by Hollywood its high pressure, highly professional and too much hard work for me. I like to spread it out over a long period of time. That's my style, coming from Texas, where there's lots of spare time, lots of space, lots of people with nothing to do, sitting around, bored, happy to be extras in a movie for nothing at all, just for the fun of it 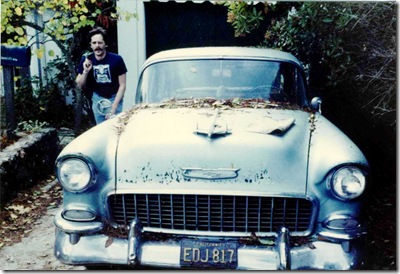 As a kind of PS here's an old photo, also from late 1979, of the late Dave Sheridan, Shelton's one-time drawing partner on the Furry Freaks. I stayed at Dave's beautiful old rambling house on top of a hill outside Fairfax, north of San Fran, for an extended weekend in late 1979, during which we watched Bob Dylan's first tv appearance for ten years on 'Saturday Night Live.' Dave had a runaway from Nevada staying with him at the time. Pic shows Dave wearing his favourite Black Death t-shirt, which he'd designed.

Dave was well pleased when he showed me that week's  TV Guide ( at the time the biggest selling magazine in America), 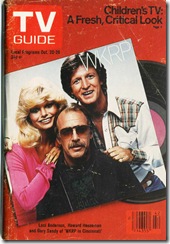 where you can see the actor Howard Hesseman in the front is wearing the same t-shirt, which I think Dave had sent him. I believe he told me that they reprinted the cover to try and black-out the logo on the shirt - but you can still make it out.

According to Wikipedia: 'In 1974, Sheridan began collaborating on Gilbert Shelton's strips...His first issue of the Freak Brothers was Number 4, with a many-page story arc entitled The Seventh Voyage of the Fabulous Furry Freak Brothers: escaping the landlady and her demands for rent, the hirsute trio go to Mexico where they encounter far worse perils, including a carolos Castaneda parody. Sheridan's detailed graphic style lent itself well to the fantastic imagery needed to lampoon Castaneda's drug-related Central American-cum-New Age sorcery. He then continued to collaborate on the Freak Brothers comix series through issues 5, 6 and 7; the team was joined by Paul Mavrides in 1978 for issue 6.'

In 1981, a few months after his marriage to Dava Stone, Sheridan fell ill. Early in 1982 he was diagnosed with cancer and he died of a brain hemorrhage in March of 1982—just a week before the birth of his daughter Dorothy.