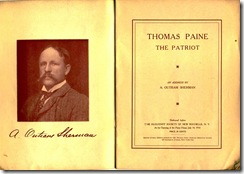 The frontispiece and Title Page of an Address given by A. Outram Sherman at the opening of the Paine House, July 14th, 1910. Delivered before the Huguenot Society of New Rochelle, N.Y., who were responsible for the building's survival. [The Generalist Archive]. 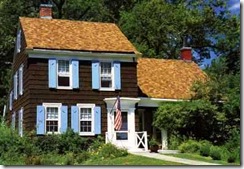 The Thomas Paine Cottage is where Paine spent most of the last seven years of his life; he actually died at 59 Grove Street, Greenwich Village, New York on June 8th 1809, aged 72.

The building was saved by the Huguenot Society, who purchased a section of Tom Paine's farm and moved the cottage, which had been gifted to them, to the new site where it stands today in its renovated form. The Tom Paine Monument is nearby. Further details at the Thomas Paine Cottage site. [Photo: Thomas Paine National Historical Association]

Delighted to learn, via The Economist that an effort is underway to institute a Thomas Paine Day in all 50 states of America before the 200th anniversary of his death on the 8th June 2009.

As regular readers of The Generalist will know, Paine is an important figure in my canon of greats. I live in a town (Lewes, East Sussex, England) where he once lived, I helped refound the Headstrong Club (of which he was the most vociferous member), helped plant a 'Tree of Liberty' in his honour, created the first website dedicated to him (Paine in the Net, now sadly defunct), which was launched at the British Houses of Parliament (the first ever event held in his honour in That Place).

The full story of this can be found in a Previous Posting at TOM PAINE IN LEWES, which has been substantially rewritten and illustrated. It also includes items of Paine's links with William Blake and Bob Dylan and details of Tom Paine's book in Tibetan.

I have always been puzzled as to the standing of Paine in America. He died in poverty, a forgotten man. His bones were dug up by William Cobbett and spirited back to England. The Founding Fathers of the American Revolution are rightly revered and celebrated but Paine, an Englishman, remains to many Americans a little-known figure despite his key role in that struggle. John Adams famously said: 'Without the pen of Paine, the sword of Washington would have been wielded in vain.' On the eve of this important Paine bicentenary, in Obama's America, will he finally be celebrated in a way commensurate with his importance to American history. We will be following this story with great interest.

Here is the status so far:

Arkansas: In 2007, legislator Lindsley Smith attempted to establish a TP Day in her state. She needed 51 votes for her Bill to pass. In the event, 46 supported her, 20 opposed and 34 legislators didn't vote at all (probably, says the Economist, because they had no idea who Paine was.)

This, and other such comments, received an angry rebuttal from Mac Campbell, in a defense of the Arkansas legislature entitled Paine Threshold.)

Democrat Anderson will try again in January, meantime engaging in an exercise to educate both public and politicians as to Paine's importance and achievements.

Nine states have so far passed a resolution. They include Nebraska and Missouri.

Virginia was the first State to introduce a Tom Paine day in 1998. 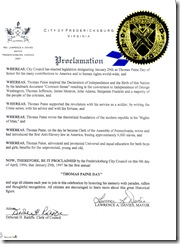 Back in 1997, I was in correspondence with Sherwood V. Smith from Fredericksburg.

He had the previous year, persuaded the authorities in his own town to adopt a Tom Paine Day and was kind enough to send me a copy of the Proclamation [see left].

It was Mr Smith who visited the Virginia General Assembly to deliver his proposal for a "Thomas Paine Day" . The detail of the Resolution as follows.

WHEREAS, Thomas Paine, a leader of the American Revolution, one of the Founding Fathers, and peer of Washington, Madison, Franklin, and Jefferson, was also one of the most brilliant political philosophers of his time; and

WHEREAS, the author of the inflammatory Common Sense and the inspirational Crisis series, Thomas Paine also wrote treatises on slavery, the equality of women, and human rights; and

WHEREAS, Thomas Paine's The Rights of Man, a seminal work written during the French Revolution, formed the very basis for the republican form of government and was one of the most widely circulated books in America during the 1790s; and

WHEREAS, the originality of Thomas Paine's ideas, and his inimitable flair in expressing them, made him one of the most popular, most influential, and most enduring heroes of the American Revolution; and

WHEREAS, of Thomas Paine, Benjamin Franklin once wrote: "Others can rule, many can fight, but only Thomas Paine can write for us the English tongue"; now, therefore, be it

RESOLVED by the House of Delegates, That January 29th of each year be designated as Thomas Paine Day in Virginia, in honor of Thomas Paine's indelible contributions to liberty; and, be it

RESOLVED FURTHER, That the House of Delegates urge the citizens of Virginia to take note of this day, named in honor of one of the most important, most passionate, and most brilliant men in American history.

Links here to leading Tom Paine societies in the US

Thank-you for the post on Paine. Hopefully, it is read by others here in the states. As a fifth-grade teacher in Colorado, probably the most important thing I can instill in students is the belief that all their voices are important. Their future does not have to be inevitable. "Little voices" can make dramatic impacts on events. That is Thomas Paine's greatest contribution to our country. His pamphlet, Common Sense, spoke to all the voices in the 13 colonies during a time of great fear and indecision. He gave a vast number of citizens a vision of what each could do, 176 days before the Declaration of Independence. A belief that power should radiate from the citizens. That message is still paramount to all our students today. For that pamphlet alone, Paine needs to be recognized as a intrical part of the American miracle.

Mark Wilensky,
author of "The Elementary Common Sense of Thomas Paine: An Interactive Adaptation for All Ages"
www.NewCommonSenseBook.com