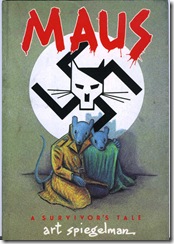 Two events triggered this post:
one was rescuing my four-foot high pile of comix and graphic novels from the store and spending a couple of happy hours rifling through them; the second was a recent cover story on Art Spiegelman in The Times Books section, in connection with the recent UK publication of his autobiographical work 'Breakdowns: Portrait of the Artist as a Young %@&*!'

The late 1980s were a great time for comics and the 'graphic novel' - a relatively new publishing concept from outside of the mainstream. In London, the centre of the scene was Forbidden Planet's shop, then tucked behind Centrepoint in London's West End.  In 1986, I was present at a packed press conference, in a bar just over the road from the shop, for the launch of the book-length collected 'Watchmen' stories (the movie of which is soon to be released) and met Alan Moore  - the prevailing genius of the genre.

( I was trying to set up Greenpeace Comics at the time and we had two further meetings about various ideas, with no outcome. We did succeed in getting Watchmen artist Dave Gibbons to do the cover and inside of a Greenpeace 'Warriors of the Rainbow' double album which went on worldwide release - another story.) 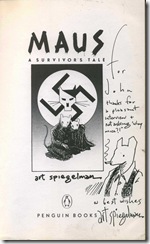 Around the same time, on September 8th, 1987, I went to interview Art Spiegelman who was kind enough to inscribe my copy of 'Maus' and grace it with a drawing - a treasured possession. 'Maus' of course went on to win a Pulitzer Prize.

The interview tape exists but has never been transcribed or published to date.