GREEN PUBLISHING AND THE FUTURE OF THE BOOK 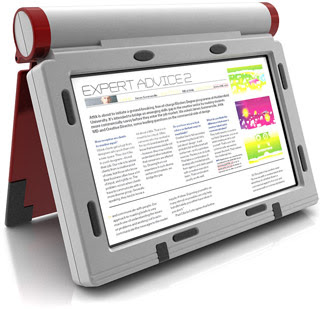 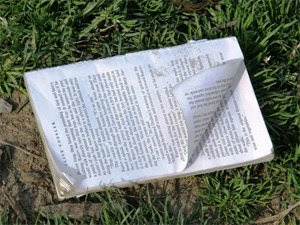 [Below] Photo by Kevin Rosseel, accompanying an essay by
Lindley Homol enitled 'Green Publishing' on www.writersnewsweekly.com

This post was triggered by interesting piece by Charles Arthur entitled 'Rewriting the book on profitable publishing' in The Technology Guardian, profiling the US-based print-on-demand company Blurb (already mentioned in Previous Posting THE GODDESS). For someone like myself, who has spent a lifetime producing illustrated books, the possibility of being able to make fine-quality full-colour books in this manner is very exciting indeed. Fully intending now to work on a project using Blurb and will report back progress and results.

Perhaps the most important aspect of this new publishing model is its environmental impact - a fraction of conventional publishing practices which are, by and large, extremely wasteful. Blurb's founder Eileen Gittins as this to say: "The public has no idea how many books are printed." Says Arthur, 'the ones you see in the shops are only the tip of the iceberg; hundreds and thousands more are printed and then pulped. With Blurb, books are only printed when someone clicks to buy them on the company's site: zero waste.'

The environment is a big issue in contemporary publishing which is why OPUS (the Oxford Publishing Society) hosted an event at Oxford Brookes University on 2nd October 2008 to discuss the issues. Marie Hanson reports:

'Edward Milford, Chairman of Earthscan, opened his speech ‘Greening our Publishing' with the provocative question "Is it possible?" He raised key issues such as the sustainability of the ‘green' process, and identified it as an industry-wide problem, which cannot be solved by individual companies working in isolation

'Earthscan aims to offset all their CO2 emissions, and have identified that 84% of these come from the paper itself. Roughly translated, a 400g book equals c2kg CO2, the same as traveling 10 km in a typical car, or two uses of a tumble dryer. The remaining percentage comes from travel, freight and office use, and Edward explored how these emissions could be reduced, or offset.

'The second speaker, Carol Richmond of Wiley-Blackwell, concentrated her talk more specifically on how to reduce the impact of paper usage on our environment. Publishing houses should work to address paper wastage, as at the moment US print runs are commonly 40% too long. The rise of print-on-demand may have an impact on this, and some publishing houses are already beginning to introduce shorter print runs, which not only reduces waste, but saves on storage costs. She also suggested that paper sourcing should be a top priority for all publishing houses, and highlighted the damage that over-farming does to the environment, with the most visible harm being in Indonesia. The Forest Stewardship Council (FSC) and the Programme for the Endorsement of Forest Certification schemes (PEFC) are the two leading companies attempting to combat illegal ‘fiber farming' and to encourage ethical paper sourcing. Currently 7% of the world's forests are certified by the two. Perhaps because of this initiative paper is becoming more expensive, with a 20-30% rise in cost this year alone. A way to combat this would be to make more use of recycled paper. So in order to keep our industry green, and save our planet, recycled loo roll is the way forward!'

green4books (an organisation, funded by the UK Publishers Association and Booksellers Association whose aim is to promote environmental awareness across the book industry

The Green Press Initiative ( a US based organisation whose Mission is 'to work with book and newspaper industry stakeholders to conserve natural resources, preserve endangered forests, reduce greenhouse gas emissions, and minimize impacts on indigenous communities.'

Their website claims that: 'Each year, approximately 30 million trees are used to make books sold in the United States—1,153 times the number of trees in New York City’s Central Park. Many of these trees are sourced from endangered forests with devastating impacts on the people and wildlife that rely on them. The good news is that the book industry is rapidly implementing practices that minimize negative social and environmental impacts. Over 160 publishers, representing about 40% of the book industry’s market share, have either developed strong environmental policies, or signed the industry-generate treatise on responsible paper use.' 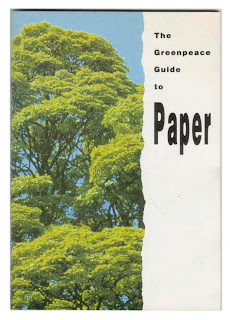 Although I cannot find it in the Archives, I am happy to say that when I was running Greenpeace Books back in the 1980s, we played a small but significant pioneering role in producing a booklet entitled 'The Greenpeace Guide to Paper'. This was produced in consultation with Canadian and other toxic campaigners as was virtually the first such publication to be poroduced. At that time, chlorine bleaching was common in the industry; it has now, I believe been virtually completely phased out, a huge environmental plus. Greenpeace Books was mandated by the organisation to use the most environmentally-friendly papers available in all our books and we were amongst the first in Britain to use such papers, which were only just beginning to come onto the market.

Greenpeace International's website has details of The Greenpeace Book Campaign which 'aims to 'green' the book publishing industry, who are currently printing the majority of their books on virgin (non-recycled) paper linked to ancient forest destruction in countries such as Finland and Canada. Book publishers are also printing children's and colour books in South East Asia, which could be linked to rainforest destruction in Indonesia. This campaign has already been very successful in Canada where Markets Initiative (a coalition project of Greenpeace Canada and other environmental groups) has worked with book publishers since 2000. Over 72 leading Canadian publishers, including Random House Canada and Penguin Canada have made formal commitments to use only 'Ancient Forest Friendly' book papers.' [This entry is not dated and it is not clear whether this campaign is still in operation.]

As to the future of the book in a world of electronic publishing, there is a large literature out there on the subject. Its a fascinating topic. Here are some interesting books and papers:

Books in the Digital Age: The Transformation of Academic and Higher Education Publishing in Britain and the United States by John B. Thompson [2005]

'The book publishing industry is going through a period of profound and turbulent change brought about in part by the digital revolution. What is the role of the book in an age preoccupied with computers and the internet? How has the book publishing industry been transformed by the economic and technological upheavals of recent years, and how is it likely to change in the future?

'This is the first major study of the book publishing industry in Britain and the United States for more than two decades. Thompson focuses on academic and higher education publishing and analyses the evolution of these sectors from 1980 to the present. He shows that each sector is characterized by its own distinctive ‘logic’ or dynamic of change, and that by reconstructing this logic we can understand the problems, challenges and opportunities faced by publishing firms today. He also shows that the digital revolution has had, and continues to have, a profound impact on the book publishing business, although the real impact of this revolution has little to do with the e-book scenarios imagined by many commentators.'

The Future of the Book by Geoffrey Nunberg (Editor). This 1996 work consists of 11 scholarly papers by mostly academics presented at a recent conference. Contributors include Nunberg, Carla Hesse, James O'Donnell, Paul Duguid, Nunberg, Regis Debray, and Patrick Brazin. The presenters take a variety of approaches to the ways, rates, and degrees to which the computer might kill the book., e.g., historical, philosophical, and inguistic. No author rejects computers or sees their takeover as complete and immediate.