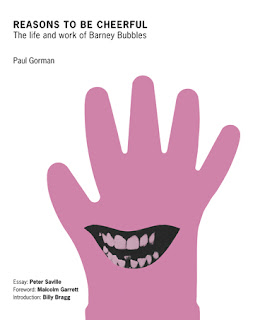 The Generalist was in London last night, attending the book launch of 'Reasons to be Cheerful: The life and Works of Barney Bubbles' by Paul Gorman, held at Paul Smith's shop on Park Road, just off Borough Market. A lively crowd overwhelmed the small shop premises, vol au vents and beer were in short supply as a result, but the energy and importance of the event were evident. 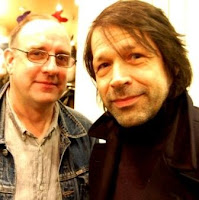 Peter Saville and Malcolm Garrett, who contributed an excellent Essay and Foreword to the book, come to pay their respects to Barney, who influenced them both; Paul Gorman saying a few words to the assembled throng; the publisher of the book Jenny Ross (centre), whose publishing company Adelita funded and produced the book; Jake Riviera with his wife Lauri and legendary dj Jeff Dexter; and the best hat in the room, crowning the head of Nigel Proktor, currently handling the Magazine renuion (see Previous Post). 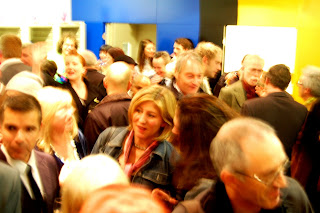 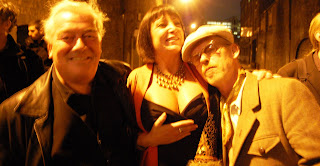 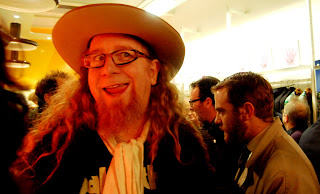 It has taken some twenty years - almost thirty years - since his death in 1983, for the self-effacing Barney Bubbles and his exuberant and prolific talent to be rediscovered and celebrated.

A total inspiration to several generations of graphic designers, illustrators, artists and musicians alike, Barney's best known work stretches from the pages of OZ and Friends magazine in the 1960s/1970s, through the creation of a powerful visual style for Hawkwind, numerous albums for Stiff (including Ian Drury's best and the Blockheads iconic logo) and the whole look and feel of Radar Records, including all the most memorable Evis Costello album covers and press campaigns - all of which is the tip of a much larger iceberg as this book demonstrates.

For those of us who knew him, this launch was a happy day that one thought would never happen. Like so many other talented outsiders, unwilling to play the establishment games, Barney was never recognised in his lifetime by the powers that be in the art and graphics world, and it has taken a number of dedicated individuals who were fans and deeply influenced by him - special mention here should be made of Rebecca and Mike - to institute and nurture a process that has led to this extremely fine and timely book.

Paul Gorman, whose excellent previous books include 'The Look' (one of the seminal works on rock and pop fashion) and 'In Their Own Write (an oral history of the music press), has thoroughly and scrupulously documented Barney's life and times in this new publication which should stand for many years as the seminal work.

For those of us who knew him, the book will bring back memories of the impish delight Barney took in his friends and colleagues, his electric enthusiasm for his work, his constant innvovations and unending search for the new and above all his inspiring and fun-filled presence. For those coming fresh to his work, particularly young artists, illustrators and graphic designers, they will find a huge source of inspiration and marvel at the effort and industry involved in achieving many of his finest artworks in that pre-digital, hands-on age of yore.

For much more on Barney see 'Barney Bubbles? What a laugh' - The history of Barney Bubbles, as told by a friend, David Wills. Beautiful stuff.

COMING SOON: An exclusive interview with Paul Gorman on the story behind the book.

UPDATE: Excellent piece by Dylan Jones in The Independent entitled 'At heart, Barney Bubbles was an artist –which led to the creative strain he put himself under'
at 2:37 pm