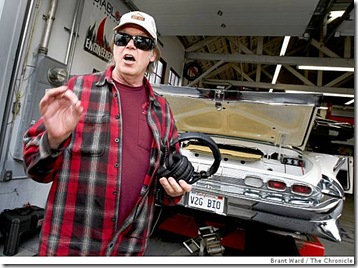 Neil Young has gone into partnership with entrepreneur Johnathan Goodwin to create a company called Linc Volt Technology to promote the conversion of existing gas-guzzling cars into vehicles that run on alternative energy.

Young started out just wanting to convert his 1959 Lincoln Continental Mark IV to run on alternate fuels. The car weighs 2 1/2 tons and at 19 1/2 feet long, it was the longest car built in its era. 'Its original gas mileage', writes Al Saracevic in the SF Chronicle, 'was best measured in feet rather than miles'.

'[Goodwin] had pioneered a new type of alternative-energy engine that makes a car run on a variety of fuel platforms... For short runs, a car can be plugged in, charged and then run strictly on electricity using a rotary engine and its batteries. For longer hauls, there's also a generator in the car that runs on compressed natural gas. When electricity runs short, the generator kicks in and refuels the batteries. To make matters even more interesting, the car's generator will actually feed electricity back into your home when it's parked and plugged in in the garage.

"It's a power generator," Young said. "This thing can power up about a third of a city block. It'll make your meter run backward."

Here are some other developments in this field since our Previous Post EARTHED: GREEN CAR GUIDE back in September 2006.

CalCars is the Californian Cars Initiative which is promoting 100mpg + hybrid plug-ins.

Follow the progress of Amory Lovin's Hypercar. See a video of Lovin's talking about his brainchild on the excellent site AutoblogGreen

In addition, an estimated 385,744 alternative fueled vehicles are currently in use in the United States, according to Alternatives to Traditional Transportation Fuels 1995, a December 1996 publication of the Energy Information Administration. These include 273,000 vehicles that run on liquid petroleum gases, 81,000 that run on compressed natural gas, 26,000 that run on 85% alcohol, and 3,900 electric vehicles (EVs).

'The former chairman and CEO of Intel Corp., Andrew Grove, thinks that energy and transportation have reached a strategic inflection point. That's a term that Grove coined years ago to describe a point in time when conditions in an industry have changed sufficiently to force a sudden and dramatic change of course for a company. Grove believes that the confluence of oil prices, environmental concerns and economic conditions now demand a rapid move from internal combustion to electrically driven vehicles. Grove is now pushing to find a way to retrofit the tens of millions of older vehicles on the road with hybrid drive systems. Grove is pushing for tax incentives to help fund battery and conversion kit development.' 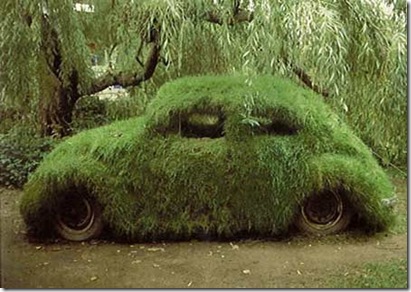 Hello,
Great blog, have you considered doing your own electric car conversions, there are good electric car plans available too, don't have to have someone else do the work like Neil.

All the best,
Les and Jane