FROM THE ARCHIVE: THE BLACK PANTHER

One person who was not there to witness Obama's election triumph was Black Panther Huey Newton. Had he lived, Newton would be 66. Malcolm X would be 83. Martin Luther King would be 79. [See: 'Barack Obama hailed as the realisation of Martin Luther King's Dream']

Was musing about this while cataloguing the five copies of Newton's paper 'The Black Panther' from 1970 and 1971 in the HQINFO Archive. 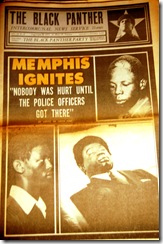 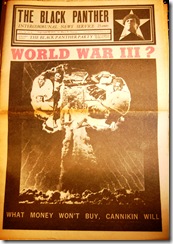 Also discovered a powerful obituary, published in The Independent on 26th August 1989 - four days after Newton was found shot dead in the street. The obituary is written the radical lawyer William Kunstler, who defended many significant figures in the underground and anti-war movements of the 1960s and 1970s. Click on the image to read full size [clip just too long for the scanner]:

The obituary begins: 'The news that the body of Huey Newton had been found lying in a pool of blood, on a street in West Oakland, California, with three bullets in his head, came as a profound shock to everyone who knew him. Less than five months earlier, Abbie Hoffman...' Now read on.

You can find the full text here of 'Liberation, Imagination, and the Black Panther Party'. Edited by Kathleen Cleaver and George Katsiaficas. [ Routledge, 2001. ISBN 0415927838, 9780415927833]. The blurb says: 'This unique collection of essays conveys the views of scholars and activists on the continuing impact of the Black Panther Party, which inspired thousands to join their movement to transform "the system." [It] offers a fresh and realistic recounting of the tumultuous history of what arguably became the most significant revolutionary organization in the US during the late 20th century.