KAPUŚCIŃSKI 1: MEMORIES of a MENTOR 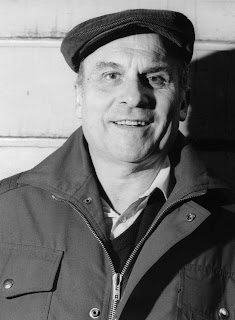 Top: First publication of a photo by Ed Barber taken in 1984 outside Paddington Station.

I can remember quite distinctly where I was when I first encountered the work of Kapuściński. Sitting in the sunshine on a Saturday morning next to the old coal bunker in our garden of the time, next to a huge flowering array of michaelmas daisies, having a cup of tea. A parcel had arrived in the post from Picador Books with material on this man who to me at that time was a complete unknown.
The parcel contained a 53pp photocopy of a profile of Kapuściński by Andrzej W. Pawluczuk of Kapuscinski, published by the Authors Agency and "Czytelnik" in Warsaw in 1980.

I began reading and was almost immediately excited and electrified in the way I had been when I first read 'Fear and Loathing in Las Vegas' in Rolling Stone magazine. This was something new and exciting, a new journalism from the East.

Shortly afterwards, I conducted the first interview that Kapuściński had ever given in Britain on 9th August 1984. It was, I am pretty sure, his first visit to the country. We met at the Basil Hotel in Knightsbridge in their wonderfully old-fashioned tea room. It is fair to say we were both nervous but soon found simpatico between us. At that time I believe only The Emperor, his extraordinary account of the court of Hailie Selassie had been translated and published in English. He was to become, in very short order, widely regarded as one of the great foreign correspondents of the 20th century.

It is fair to say that we became friends, dear close personal friends. We maintained a correspondence. We were to meet again in April 1986 for a further interview.

Kapuściński was a mentor to me. He was the first person to tell me that journalism was a vocation. Iasked him what he could tell me about the world he had roamed over for so manyyears. He told me I would remember the important things; this is what I recall. Firstly, people are the same the world over - they are born and they die, they have children. Secondly, human nature doesn't change, that's why Machiavelli and Shakespeare are contemporary works.

Ryszard got angry with me once, saying he didn't eat an orange until he was 15. That put me in my place. Another time I was a bit downcast, he asked me why and I told him I had money worries and he just reached in his pocket pulled out a role of notes and gave them to me. As if it was the most natural thing in the world.

Our correspondence was sporadic and is now in a file carefully protected. The first letter from him is dated November 30th 1984. The second on January 26th 1985. All was going well. I was editing a brand new magazine called Tomorrow and the interview was to feature in it. Then calamity struck and the magazine was taken out of our hands. [There is a long story attached to this which will have to be written about at a later time]. I alerted Ryszard to the situation and received the following letter from him, dated 17 September 1985:

'I am extremely sorry to answer your letter so late but I have been away from Warsaw for quite a long time, in such an outlandish place deep in Poland that I couldn't write a single page there. Still, I was thinking about you quite often and only when I arrived in warsaw could I rush to answer your letter.'

He thanks me for the clippings and a copy of an Evelyn Waugh book on Ethiopia I sent him. The letter continues:

'I was really shocked when I read about your misfortune. I feel exteremely sorry for you/and for myself! Who will ever popularise me in the way you were so kind to invent?/I hope that you have already recovered from this misfortune - this is, at least, the good news I would like to recieve in your next letter.

'If everything is fine I will come to England next spring for at least three months. I am already looking forward to seeing you then and I am glad at the thought of meeting you. Once again I apologise for the fatal delay but I wish we could still correspond with each other. I would like to keep in touch with you as I do appreciate your letters, news from you, your kind heart and your help.

My best wishes as ever
Ryszard Kapuściński

Other short letters followed and then on 8th April 1986, I wrote to him c/o St Anthony's College Oxford, to altert him that I had obtained tickets to a lecture by Bob Geldof at the Royal Institute of International Affairs in Pall Mall on 22nd April. Geldof had persuaded Mick Jagger to do Live Aid by giving him a copy of The Emperor. I introduced K to Bob. (see 'Memory Exercise' - my very first entry in this blog on June 1st 2005 for more details)

Various letters followed and we met again at the Royal Court Theatre when he came over for the stage play of 'The Emperor', adapted by Michael Hastings and Jonathan Miller, in April 1987. The letters show that I was in touch Bill Buford, then running Granta over his Kapuściński piece and also with Adam Low who was making a BBC Arena programme. A Xmas card arrived and then another letter in July 1988, saying he had spent the spring at the Temple University in Philadelphia and had also been to Uganda - he was working on his book on Idi Amin at that time. A further letter in October said 'we've experienced recently very turbulent events taking place and they consumed a lot of my time but I was unable to isolate myself from them.' By the time I wrote again in December I had been to Moscow.

In 1989 he wrote in February and April, in the latter letter congratulating me on 'The Greenprace Story' (see previous posting). 'I am only too happy to congratulate you on having this book published. I found this perfect fusion of remarkable photos and text, extremely interesting, made with highest journalistic skills. I am pretty sure that the book will receive an approving media coverage and an enthusiastic public recepion.'

An Xmas card came in 1990, I responded on January 2nd and his last letter came to me on Jan 24th. It read, in part. I am happy to learn that you are planning to come to Warsaw and I will be very glad to meet you at the airport.'

In fact I never made it to Warsaw. Ryszard took a long trip across the former Soviet Union for his book Imperium and I got absorbed with other projects. He wrote again in April 1991, I responded with a lengthy two-page letter. At that point, the letters run out.

Time passed. Every so often I would think of Ryszard but our contact by then was lost. Then came the news this January that he had passed away. Its taken about three months for me to face reading all these letters again. A dear sweet man, sadly missed. I will never forget him and always treasure the support and inspiration he so freely gave me.