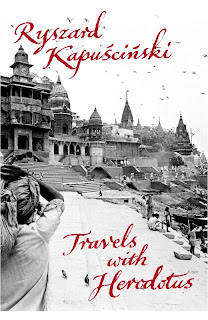 It is fitting and also very moving that Kapuściński's last book, published in June this year should be 'Travels with Herodotus.'Fitting because Herodotus, according to Wikipedia, was a Greek historian from Ionia who lived in the 5th century BCE (ca. 484 BCE–ca. 425 BCE) and is regarded as the "Father of History". He is almost exclusively known for writing The Histories a record of his 'inquiries' into the origins of the Greco-Persian Wars which occurred in 490 and 480-479 BCE. The nine volumes include not only a narrative account of that period, which would otherwise be poorly documented, but also long digressions concerning the various places and peoples he encountered during his wide-ranging travels around the lands of the Mediterranean and Black Sea.'

Moving because we learn that when Kapuściński was a novice reporter in Poland he yearned to travel and broached the subject with his editor-in-chief Irena Tarlowska . Nothing was said for a year until one day K was summoned to her office and told he was being sent to India - a country he knew absolutely nothing about it. He writes: 'At the end of our conversation... Tarlowska reached into a cabinet, took out a book and handing it to me said: "Here, a present for the road." It was a thick book with a stiff cover of yellow cloth. On the front, stamped in gold letters, was Herodotus THE HISTORIES.'

What a strange quirk of fate - that one of the greatest traveller-reporter of our time should be so pointedly and intimately connected with the very first of his kind in such a prescient way from the outset. Thus K's first encounters with India, China and Africa - captured in his usual brilliant prose, which appears seemingly simple yet proves to be both deep and subtle - are interwoven with his readings from Herodotus and his musings of the nature of the man.

He writes: 'Man is by nature a sedentary creature, settled down happily, naturally, on his particular piece of earth...But to traverse the world for years in order to get to know it, to plumb it, to understand it? And then, later, tp put all his findings into words? Such people have always been uncommon.' Of course, K was one of those uncommon ones himself.
* 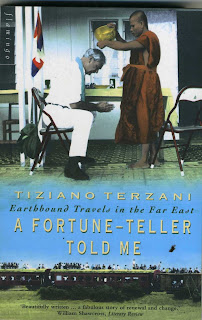 As fate would have it, this book arrived just after I had finished reading another extraordinary tale of travel and adventure, 'A Fortune-Teller Told Me' which carries the following recommendation from Kapuściński on the cover: 'A great book written in the best traditions of literary journalism...profound, rich and reflective.' Born in Florence, Tiziano Terzani spent 25 years working as Der Spiegel's Far Eastern correspondent. In the spring of 1976, he had visited a fortune teller Hong Kong who told him:
'Beware! You run a grave risk of dying in 1993. You mustn't fly that year. Don't fly, not even once.' The prophecy haunted him for the next sixteen years and when 1993 rolled round he submitted to the old man's warnings.

The book follows Terzani through that year - a year in which he travels vast distances but only by car, train and ship. He feels justified when he learns that a helicopter he would certainly have been on, carrying foreign correspondents, crashed and several were killed. He discovers the joys of not rushing from airport to airport, of seeing the landscape unfold, of adjusting his behavious to a different clock. Everywhere he goes he consults soothsayers and fortune-tellers of all descriptions. Thus there is an inner journey taking place and a constant dialogue between
Terzani's Western mind and the Eastern philosophies and mindsets that he is forced to consider.

Interestingly, Terzani travels to Mongolia in the company of a book written by a Pole 'Beasts, Men and Gods' by Ferdinand Ossendowski. who travelled the region in the 1920s, trying to escape the Bolsheviks. A former Russian naval officer who converted to Buddhism, he believed Mongolia should remain a separate republic and fought like a demon to achieve that end. His account of his epic flight through one of the most mysterious regions on earth was a bestseller when it was published in New York in 1922.

Incidentally, I was turned onto this book initially by reading a 2005 article in The Guardian – ‘The escape artist’ by Piers Moore Ede. It begins: ‘All of us, at some stage or another, pick up a book by pure chance, perhaps in a second-hand bookshop, or from a desultory shelf made up from what holiday-makers have left behind. Occasionally, those books can work a particular magic on us, their resonance deep enough to suggest fate itself has thrust them into our hands.’

I recommend reading the book first and then this article, where you discover how Terzani's journey through life ended.