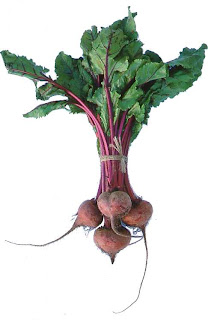 There are numerous news sources to follow on the development on the negotiations between Poland and the US over NMD but for a real feel for the issue from the inside I value Beatroot, a journalist and blogger from Warsaw who describes himself as a '251 year old male Aquarius' and his interests as 'politics. football, music, bogsnorkelig' Here are some of his recent posts on the subject.

Critics of the anti-missile system in have the same paranoid mind set as the man who wants to place them here: George W Bush.

As I write, a handful of demonstrators are standing in a blizzard outside the presidential palace in , protesting against a ‘grave new threat to this nation’s security’.

It appears that Poland and the Czech Republic are close to finalizing an agreement with the to station an anti-missile system on their soil. Protests have come from , but the says that these missiles are a defensive measure against attack from ‘rogue states’, meaning presumably , .

This story has not come out of the blue, of course.

The current Polish defense minister, Radek Sikorski, was a one time member of the neo-con American Enterprise Institute (AEI). As far back as December 2004, Sikorski was quoted on the AEI web site as recognizing that the placing of the anti-missile system presents political problems for Polish governments. The article says:

"Anything less than a generous package -- which could include greater industrial and economic incentives according to Sikorski -- would be "a difficult sell in the current atmosphere of ."

Poles have not been amazed by successive governments close association with the ‘war on terror’, especially their troop placements in and . It’s widely thought that these have moved up the list of countries that are on possible terrorists’ target lists.

It appears that up to 10 interceptor missiles will be placed somewhere in and a radar tracking station in the . So what ‘package’ has come up with to help sell this idea to the Polish public? We simply don’t know.

But it is being assumed by the anti-missile critics that the placing of such a system in would further move the country up the terrorist’s (and rogue states) list for attack.

Time to get real
Some on this blog (see comments in previous post) are drawing parallels to the US anti-missile system and the Soviet missiles we now know were in Poland from 1970 to the end of the Cold War.

But people who make this comparison are making the same mistake as is. During the Cold War both sides were armed to the teeth with massive nuclear arsenals, which could obliterate either side within a very short period of time.

Nobody is suggesting, however, that or have the capacity to launch missiles that have a range to get any where near , let alone western Europe. In fact, nobody is seriously suggesting that these countries have any nuclear missiles at all. North claims to have made a nuclear test, but that does not mean that it has any nuclear missiles. Nor does it mean that it is stupid enough to launch any.

And there is no evidence at all that is actively perusing a nuclear weapons program – only that they are in the middle of developing nuclear material for power stations. Everything else is supposition.

There is no evidence of such a threat coming from ‘rogue states’ – and consequently there is no need for such a system.

But the critics of the decision of placing a anti-missile system in are being as paranoid as the government.

Just as western Europe is not a possible target of Iran or North Korea, neither will al-Qaeda be moving in to bomb public transport systems, just because a few (unnecessary) missiles are on Polish soil.

Either way, it makes little difference to 's security.

But everyone - for and against - seems to be reading from the same script. Critics of the are buying into the same paranoia that is currently fuelling the ‘war on terror’. Consequently, they are not forming a very good opposition to it. 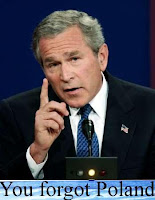 Bush asked to come to

The Polish government must be desperate.

So contentious is the planting of US anti-missile systems in that the government has asked George W. Bush to come to Warsaw in the summer and sell the idea to the electorate.

That Bush can be seen in the eyes of the Kaczynski’s as an asset in winning any battles shows that they are a little detached from political reality.

But no matter – the government has its own way to hold together its support in the country – hounding out a communists and ‘collaborators’ left in the secret services, media etc, always does the trick.

While a majority of Poles are against the idea of having an anti-missile base here, around 60% support the government’s attempt to finish off the Solidarity revolution by kicking the old guard out of the public services.

So at a time when the Kaczynski administration is fraying at the edges, with bits falling off it from resignations, etc, and when no real progress is being made at making the public services more cost efficient for the poor bastards that have to pay for it, a bit of commie bashing always comes in useful.

But will Bush come in useful as an anti-missile base traveling salesman? That’s…er...a tricky one…

More?
According To Polish Prime Minister Democracy Is Not Functioning In Full, Polish Outlook 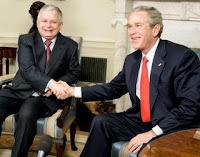 President Lech Kaczynski came out of his meeting with George Bush at the White House, Monday, sounding much more certain that the anti-missile system is coming to northern .

“It’s a forgone conclusion,” Kaczynski said standing next to a grinning Bush. Only the details, technical details, need to be cleared up.

A few weeks ago it emerged from anguished Polish spokesmen that the talks were not going as well as expected. There were sticking points. But now things seem to have moved forward considerably. So what changed during the pow-wow in the Oval Office?

Kaczynski has apparently been learning some English. Or so we are told. But what’s in his specially produced US visit phrase book, apart from “Hi”, and “I’ll have the cheese burger, just like my buddy George, please.”?

Maybe the phrase book – a slim volume - was filled with a couple of other phrases.

But it looks like it is possible that Bush has offered something different. Something more concrete.

Former PiS defense minister Radek Sikorski was on Polish Radio this morning when he said:

“It’s obvious that [the ] has offered them [PiS] something. I think they have given them Patriot Missiles.”

Patriot missiles? They are a tracking missile for anti-ballistic defense. Most varieties of the patriot appear to have a range of 70 kilometers.

They were used in the Gulf wars against Saddam's Skud missiles, and has them as protection against any missiles whistling over the border from .

So they are perfect, from 's perspective, for hitting missiles coming from a source near one’s own border.

Perfect for fending off any missiles coming from….maybe ?

So while the whole anti-missile system is said by and to be against ‘rogue’ states, a armed with patriots would feel a little securer against threats from .

The name ‘Patriot’, by the way, is an acronym for Phased Array Tracking Radar to Intercept Of Target.

There is also another bacronym: Protection Against Threats, Real, Imagined, Or Theorized.