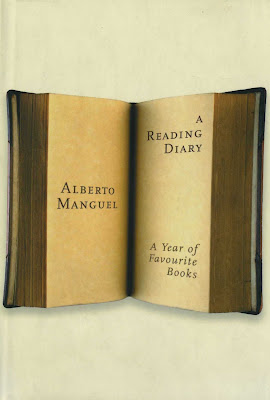 Alberto Manguel's 'A Reading Diary' [Canongate Books. Edinburgh. 2004] has rapidly and recently become one of my favourite books for a variety of reasons.

He explains the genesis of the book as follows: 'A couple of years go, after my fifty-third borthday, I decided to reread a few of my favourite old books, and I was struck, once again, how their many-layered and complex world of the past seemed to reflect the dismal chaos of the world I was living in. A passage in a novel would suddenly illuminate an article in the daily paper; a half-forgotten episode would be recalled by a certain scene; a single word would prompt a long reflection. I decided to keep a record of those moments.

'It occurred to me then that, rereading a book a month, I might complete, in a year, something between a personal diary and a commonplace book: a volume of notes, reflections, impressions of travel, sketches of friends, of events public and private, all elicited by my reading.'

Thus the the book is made up of 12 chapters, each centered round a reread book - The Island of Dr Moreau and Don Quixote are two that come to mind. Each chapter consists of brief texts of various lengths which take you variously into the book, intro a connection triggered by the book, into the author's other thoughts, into the landscape the writer is passing through. It includes the quotes and thoughts of others and also lots of lists of which Manguel is quite fond.

In the hands of another writer such a book could be mawkish and pretentious but Manguel brings grace, erudition and style to the enterprise. It is a truly delightful and inspiring book
that I shall return to again and again for inspiration and ideas.

Alberto Adrian Manguel was born in Buenos Aires on March 13th, 1948. His grandfather (who came from Mongolia) kidnapped his grandmother (daughter of one of the Tsar's gardeners) at the age of sixteen. The young Manguel was raised in Israel where his father was the Argentine ambassador. He has lived in Tahiti and England and 1984 he became a Canadian citizen. He currently lives in France. An acclaimed essayist and novelist, he is also a prize winning translator and has edited ten anthologies. 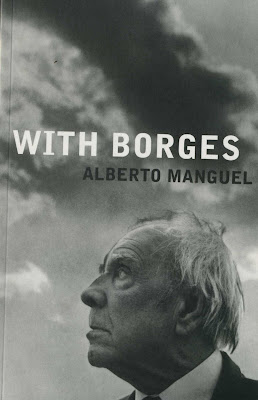 At the age of 16, he was working in a bookshop in Buenos Aires when he was approached by a blind writer and asked if he would be interested in a part-time job reading to him aloud. The writer was the legendary Jorge Luis Borges and 'With Borges' [Telegram Books 2006] is Manguel's beautifully written account of the several years he spent in his company and of the lasting effect Borges had on him. Just 74pp long, its is little masterpiece on the magical mind and memory of one of the world's great modern writers. 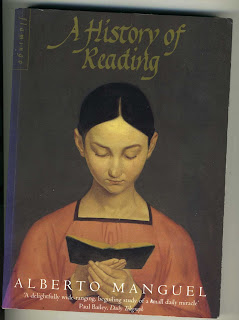 UPDATE: Since writing the above piece have also discovered another Manguel masterpiece 'The History of Reading' in the first chapter of which he describes his personal reading history up to and including his experiences with Borges outlined above.

I found the book as a whole too rich a dish to devour in one sitting. I came away, having read the first five or six chapters, with three important ideas to think about.

Firstly, many of the Ancient Greeeks had prodigious memories and were against writing things down as a result Secondly, it wasn't until the tenth century that silent reading became the norm in the West. 'Previously', says Manguel, 'normal reading was performed out loud.'

Thirdly and most interesting of all, it turns out that the act of reading itself is a fascinating and intricate one. Manguel writes: 'How does the act of apprehending letters relate to a process that involves not only sight and perception but inference, judgement, memory, recognition, knowledge, experience, practice?...all these elements necessary to perform the act of reading lent it an astounding complexity, which required for its successful performance, the co-ordination of hundreds of different skills. And not only these skills but the time, place, and tablet, scroll, page or screen on which the act is performed affect the reading.'

Footnote: One of Manguel's other extraordinary works is 'The Dictionary of Imaginary Places', co-written with Gianni Guadalupi, a huge encyclopaedic work fully illustrated with charts and maps, more of which anon.
at 1:08 pm