ON THE ROAD IS 50: Critics, Movie, Lost Play, Estate 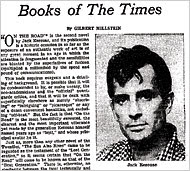 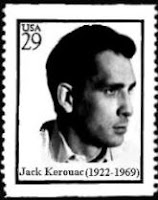 (Left): Read the very first review of 'On The Road' in the New York Times (Sept 5th, 1957) by Gilbert Millstein. It's a crackerjack of a review, beautifully expressed and written, very prescient. It's the most famous review in the history of the newspaper. (Right): Kerouac postage stamp.

Not everybody likes 'On The Road'. Check out these criticisms and critiques.

America's first king of the road: ‘Fifty years ago Jack Kerouac's dazzling novel 'On the R oad' became the blueprint for the Beat generation and shaped America's youth culture for decades. It influenced scores of artists, musicians and film-makers, but how does it resonate with young people today?’ Sean O'Hagan [The Observer. August 5 2007]


Road Rules: ‘The novel that launched the Beats, the hippies and designer jeans turns 50. But this legendary 'joyride' is actually the saddest book you'll ever read—even with God on every page. Time for another look.’. By David Gates [Newsweek. April 13th 2007]. See also Gates' 1999 article in Salon Breaking Up With The Beats: 'Kerouac and company were my firfst literary loves - but I had to get off their road.'

Why Kerouac Matters: The Lessons of On the Road (They're Not What You Think)
by John Leland [Viking]

Amazon.com: In Why Kerouac Matters you make the against-the-grain argument that On the Road is not an ode to permanent adolescent transience and rebellion but rather a guide in moving toward adult responsibility. Could you explain?

Leland: Like any good book, On the Road sustains at least two threads. The one that gets the most attention is the book of Dean Moriarty (Neal Cassady), the wild, yea-saying overburst of American joy who sounds an irresistible call to adventure. Dean is the circus that every boy dreams of joining. Dean’s road is pure carnal excitement, all speed and jazz and sex. But there's also the book of Sal Paradise, the narrator, who follows Dean out onto the road but then ultimately outgrows him, finishing the book off the road. Sal comes to recognize Dean's road as destructive and limiting--as long as Dean keeps going through the same motions, leaving a new baby and a new ex-wife in every town, he isn't really on the road, he's stuck in a rut. Sal, by contrast, is learning to be a man and a writer, searching for meaning and a home. For all its frantic adventures, the book ends with Sal nesting with his new love, Laura (Joan Haverty, Kerouac's second wife) and ready to write the book we're still reading. 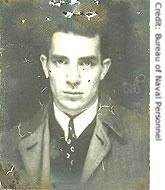 ON THE ROAD: THE MOVIE
The latest news is that the movie (IMDB) is to be directed by Walter Salles based on a screenplay by Joe Rivera (director and writer of The Motorcycle Diaries). Rivera confirms he has written the script. Salles wants the cast to consist of unknowns; Carolyn Cassady says she is to be played by Kirsten Dunst. There is a detailed Wikipedia stub describing the long and troubled road that Coppola has gone down in his attempts to produce the film since he first bought the film rights in 1968 ! Zoetrope have been scouting locations in the Cincinnatti area but the company refuses to confirm or deny whether they will be filming there. 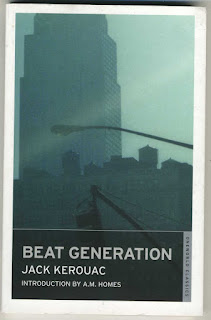 LOST KEROUAC PLAY
Written in 1957 and newly rediscovered in December 2004, this three-act play was first published by Thunder's Mouth Press in the US in 2005 and by One World Classics in the UK in 2007 (Edition pictured).

According to Dan Glaister in The Guardian 'The play recounts a day in the life of the hard-drinking, drug-fuelled life of Jack Duluoz, Kerouac's alter-ego. "Kerouac wrote the play in one night when he returned to his home in after the publication of On The Road," said Kerouac's biographer and family friend Gerald Nicosia... Although the play was never published or performed, the third act became the basis for a film, 'Pull My Daisy', starring Allen Ginsberg.

'Kerouac's agent, Sterling Lord, said Kerouac had sent it to several producers but it was turned down…Kerouac even sent the play to Marlon Brando, Mr Lord said. Kerouac was desperate to collaborate with the actor, and wrote a letter to him in 1957 urging Brando to appear in a play adaptation of ‘On the Road’. Brando never responded, and the two only met once, in 1960, when Kerouac enrolled in the Actor's Studio. But his foray into acting was shortlived. After 15 minutes he asked, "Don't they give you any drinks in this place?" Spotting Brando he invited him for a drink. Brando refused.'

THE KEROUAC ESTATE: In August 21, 2001, the Berg collection of the NY Public Library bought the Jack Kerouac Estate for an undisclosed amount of money. The large archive, which was meticulously organized and preserved by Kerouac, contains manuscripts, notebooks, letters, journals, photographs, and personal items saved from the time he was 11 through his death in 1969 at age 47. Selections from the archive will be on display in Beatific Soul: Jack Kerouac on the Road, an exhibition on view at The New York Public Library November 9, 2007 through March 16, 2008.