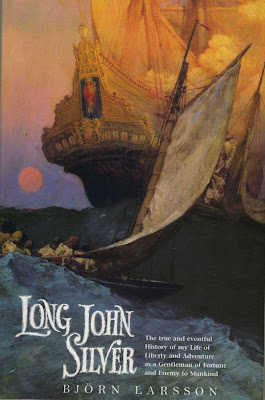 Everyone loves a pirate tale, witness the massive global boffo box office recption for Johnny Depp's 'Pirate of the Caribbean' series. Most of us will trace this fascination back to reading 'Treasure Island' when we were kids, although whether kids still read Stevenson's classic book today is another matter.

Out of all the various pirate tales and sagas I have raid in the many years since 'Long John Silver' by Bjorn Larsen [Harvill Press'London. 1999] is the finest. Sub-titled 'The true and essential History of my Life of Liberty and Adventure as a Gentleman of Fortune and Enemy of Mankind' this is that rare thing: a rip-roaring tale of great literary quality in which the fictional John Silver is brought to life as a real person, who as the book opens is sitting down to write his memoirs at the end of his life.

Chapter 2 begin: 'I can still feel the surgeon's knife slicing into my flesh as if it were butter' and from that moment on we are caught in a series of riveting adventures that are brought to life so vividly that one has to catch one's breath. It bears comparison with William Golding's trilogy and Joseph Conrad's masterful 'The Nigger of the Narcissus.' We meet the legendary Captain Flint and the writer Daniel Defoe in the course of Silver's adventures and the book cleverly throws a new lights on the fictional 'Treasure Island' in way that makes us believe that, for the first time, we are getting the real story. There are no cartoon cliches here
rather a complete and graphic evocation of a world steeped in pain, punishment and privation in which only thr strong survive.

Larson is a Swedish sailor-writer steeped in British 18th century sea-lore, who lived in a his racing yacht Rustica for six years. All his knowledge and understand of the ocean, of shipboard life is here. A brilliant tale well told. 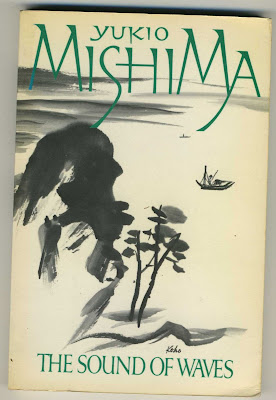 Yukio Mishima is infamous as the Japanese writer who committed seppuku (ritual suicide) after trying to stage an unsuccessful military coup, a story brilliantly filmed by Paul Schrader in his eponymous movie 'Mishima' - possibly his finest work. Most people including myself know little else.

From this book's 'A Note about the Author' I learnt that Mishima was born in Tokyo in 1925, graduated from Tokyo Imperial University in 1947, and published his first novel the following year. He was considered the most spectacularly gifted young writer in Japan. He went on to a write 13 more novels, from which ten films have been made, 33 plays, countless short stories and a travel book.

'The Sound of Waves' (Perigree Books. New York. 1956) was filmed twice but just reading fills one's mind with pictures. It is a deceptively simple story set of an idyllic island of first love between Shinji, a fisher boy and Hatsue, the daughter of the most powerful man in the community. A genuinely beautiful tale. 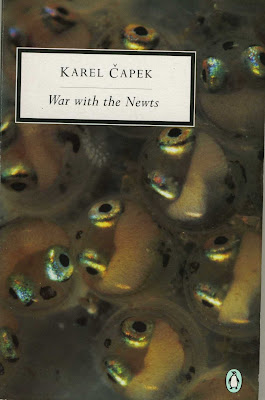 The Czech writer Karel Čapek was the man who invented the word 'robot' in his work of science fiction
'R.U.R' (Which stands for Rossum's Universal Robots). Needless to say, the robots get out of hand.

A similar theme is explored in 'War With the Newts',
a genuinely creepy and scary work of the imagination.
It begins like 'King Kong' with a old sea captain sailing the relatively uncharted regions of the eastern Pacific where, in an isolated bay live strange creatures. The captain befriends these unusual black newt-like creatures who he discovers area capable of being trained to fish for pearls.

The captain then has the idea of developing this industry by shipping newts in tanks to different islands and expanding his operation. With the help of a businessman this soon turns into a huge operation and, as a result, the newt population expands exponentially.

The newts have the ability to undertake large-scale construction operations under the ocean and before long most of the world's countries (except the landlocked ones) have a force of newts busily resculpting and extending the land mass of the continents. Needless to say, in the end, it all goes badly wrong.

The Penguin edition contains an excellent introduction by Ivan Klima, which concludes: 'Čapek's entire work testifies to the contradiction faced by a seeing, knowing creative spirit, a spirit that longs to purify and enlighten the world but fears its own imperfection and limitations, fears what people will do with his visions. This dilemma will undoubtedly haunt mankind forever. Čapek's work illuminates it with the power of personal experience.'