NATIONAL MISSILE DEFENSE: Will it work? 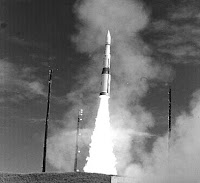 This is an edited extract from

The ground based mid-course (or national missile defense) system has not reached the stage at which operational testing is even possible. The preliminary intercept tests to date have been highly structured and unrealistic…A surrogate booster flew the target missiles in daylight and good weather at slower than normal speeds and altitudes. There has not been a successful intercept test since October 2002, almost four years ago.

What the experts say

The previous tests..do little to tell if the system will work when needed in real life situations. The Pentagon’s chief weapons tester, acting Director of Operational Test and Evaluation, David Duma, reported early this year that while the system currently being deployed “may have some inherent defensive capability,” its battle management system “has not yet demonstrated engagement control” and that “there is insufficient evidence to support a confident assessment of [even] limited defensive operations.” [Director Operational Test and Evaluation FY 2005 Report, January 2006]

A Congressional Research Service report, published on 18 January 2006, confirms Duma’s negative assessment of GMD: The report notes the “mostly unsuccessful history of the effort,” and states that there is no “conclusive evidence of a learning curve, such as increased success over time relative to the tests of the concept 20 years ago.” [CRS report, Kinetic Energy Kill for Ballistic Missile Defense: A Status Overview]

Dr. Philip E. Coyle, a former Department of Defense director of Operational Test and Evaluation (DOTE), agrees with these assessments. He noted in a July Journal on-line interview, ”the system has no demonstrated capability to defend the under realistic operational conditions.” [Wall Street Journal on-line, July 3, 2006]

In a report released earlier this year, the Government Accountability Office (GAO) noted that auditors from the Missile Defense Agency (MDA), the organization responsible for developing the GMD system, found that “the interceptor design requirements were unclear and sometimes incomplete, design changes were poorly controlled, and the interceptor’s design resulted in uncertain reliability and service life” and by attempting “to concurrently mature technology, complete design activities, and field assets before end-to-end testing of the system,” MDA’s program to develop the GMD system has been conducted “at the expense of cost, quantity, and performance goals.” [Missile Defense Agency Fields Initial Capability but Falls Short of Original Goals (GAO-06-327), March 15, 2006]

Premature deployment of such a complex system runs a high risk that critical technologies will not function as intended; at best this results in expensive modifications, or more likely a return to the drawing boards for re-design and a waste of billions of dollars in the case of GMD.

Even the director of the Missile Defense Agency (MDA), Air Force Lt. General Henry A. Oberling, in a moment of candor, gave the system a less-than-flattering description. He stated in June 2005 that GMD has a “greater than zero chance” of working. ["DoD: US Has 'Better Than Zero' Chance At Missile Intercept," Dow Jones News - July 21, 2005 - By Rebecca Christie]

All in all, these are hardly assurances from responsible officials and experts that justify continuing to procure up to 40 interceptors planned for Fort Greeley, Alaska, and Vandenberg Air Force Base, California, and 10 additional interceptors for a third site, presumably in Europe. ( and the are the leading candidates).

Moreover, key elements of the planned system are many years away from deployment…

Even with all the components in place and functioning as intended, however, it is highly doubtful that the ground based mid-course system will be able to consistently and reliably intercept incoming warheads during their mid-course flight in space.

Several authoritative non-governmental organizations and individual experts have concluded that the currently planned national missile defense system will be unable to counter a missile attack that employs even relatively unsophisticated decoys or other countermeasures, which are readily available to any nation capable of developing an inter-continental ballistic missile.

The prospects for destroying ICBMs in their boost or terminal phases are similarly unfavorable. The projects under development for the boost phase - the land- and sea-based kinetic energy interceptors and the airborne laser - have experienced substantial delays and cost increases; even if they prove feasible, their anticipated capabilities will not enable them to counter a threat from .

While costs are difficult to pin down, there is general agreement that some $100 billion has been spent on missile defense since 1983. Congress approved $8.7 billion of the administration’s $8.8 billion request for missile defense in fiscal year 2006 and the amount in the administration’s fiscal ’07 budget request is $10.4 billion, an increase of almost 20%. [Analysis of Fiscal Year 2007 budget request, Center for Arms Control and Non-Proliferation, February 2006]

In January 2006, the Congressional Budget Office (CBO) issued a report entitled “The Long Term Implications of Current Defense Plans and Alternatives.” It projects the budget for missile defense at up to $19 billion in 2013. The average annual amount for missile defense, according to the study, would be $13 billion between 2006 and 2024. [Figures 3-30 a & b, "The Long-Term Implications of Current Defense Plans and Alternatives: Detailed Update for Fiscal Year 2006," Congressional Budget Office, January 2006] Dr. Coyle estimates that, “If spending rises as much as estimated by taxpayers could spend over a trillion dollars on missile defense in that period.”

It is apparent that astronomical amounts are being spent on national missile defense, a system that has a very low probability of functioning effectively and given the opportunity costs, the system should be accorded low priority, even if the prospects for success were more favorable.

Since there is no credible evidence that the leaders of and are inclined toward suicide for themselves or their countries, continuation of the strategy of deterrence should be an effective defense against an ICBM attack by these two countries against the .

It is irresponsible to squander such large amounts on national missile defense when there are higher priority defense and domestic programs that remain under-funded. At the current rate of expenditures, for example, Russian nuclear weapons and materials will not be secured until 2020 and weapons grade nuclear materials worldwide will not be secured until 2030. It is far more likely that rogue states or terrorists will obtain a nuclear weapon or nuclear materials and smuggle a nuclear device into the than delivering one by an ICBM.

The January ’06 Congressional Budget Office report cited earlier notes that stopping deployment of missile defense systems and confining efforts solely to research and testing of missile defense concepts during the 2006-20024 period would reduce average annual costs from $13 billion to $3 billion. This is the prudent course of action with GMD, and as much of the savings as necessary should be spent on securing nuclear weapons and materials throughout the world to prevent the most serious and more likely nuclear threat to the United States.