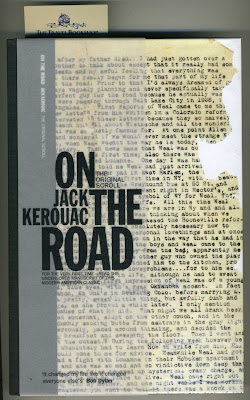 Left: The British edition of 'On The Road: The Original Scroll' by Jack Kerouac. Edited by Howard Cunnell. [Penguin Classics. £25.00]

Fifty years ago this month (on Sept 5th, in fact) saw the first publication of 'On The Road' by Jack Kerouac, an event that has been widely celebrated in the US and around the world. The Generalist, like millions of others, was first infected with the Beat spirit through reading this marvelous book.

''On The Road: The Original Scroll', which I purchased yesterday at The Travel Bookshop in Ladbroke Grove, is an event in itself. Began reading it in a bar as the light faded into the early autumnal evening, continued on the late-night train home (fell asleep and almost missed my station by a whisker) and read some more late into the night, began again this morning over coffee and croissant and have now reached San Francisco. The book has me under its spell once more.

Some explanation is required here.

Part of the huge myth surrounding 'On The Road' is do with the actual process of writing of it. Legend has it that it was written while Jack was high on benzedrine and that he wrote it all in three weeks in April 1951 on a long roll of Teletype paper, with no punctuation, while listening to bop on the radio.

In fact the story is a great deal more complicated than that, as we discover in this new edition of the book thanks to an excellent long introductory essay by Howard Cunnell (a Visiting Lecturer In Creative Writing and American and English literature in the University of Kingston), the man who also had the responsibility of preparing the 'scroll' for publication. [The book has three other introductory essays by various authors, each of which add something to the party]

To begin: Kerouac had written at least three proto-novels of 'On The Road' of varying lengths - big chunks of long-form fiction - and had myriad notebooks and travel journals and letters in which he can be seen to be developing the work.

During the writing jag when he produced the scroll he later told Cassady: 'I wrote that book on COFFEE, remember said rule. Benny, tea, anything I KNOW none as good as coffee for real mental power kicks.'

He was writing in a large, pleasant apartment in Chelsea, New York. He did the writing on long, thin sheets of drawing paper but its not known whether he stuck them together first and then typed, or vice versa (typed then stuck). Whichever way, Kerouac shaped and cut the paper into different lengths to fit into the typewriter. 'A long roll of paper,' writes Cunnell, 'like the remembered road that he could write fast on and not stop. So that the paper joined together became an endless page.' The scroll is, for the most part, conventionally punctuated.

Cunnell says something really exciting and inciteful about Kerouac's scroll typing: 'Kerouac's clattering typewriter is folded in with Jackson Pollock's furious brushstrokes and Charlie Parker's escalating and spiraling alto saxophone choruses in a trinity representing the breakthrough of a new postwar counterculture seemingly built on sweat, immediacy and instinct, rather than apprenticeship, craft and daring practice.'

Kerouac's first book 'The Town and the City' had been published on March 2nd 1950. After writing the scroll in April 1951, Kerouac undertook extensive revisions of it and in Oct0ber that year, also wrote his third novel 'Visions of Cody'. Cunnell says intriguingly that 'the scroll is the wildflower from which the magic garden of 'Visions of Cody' grows'. 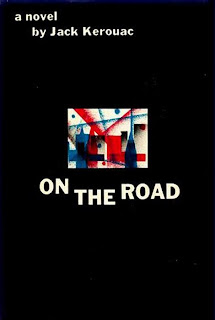 It would be a further six years before 'On The Road' was finally published in what can now be seen as a bowdlerised version, in which Kerouac changed people's real-life names to pseudonyms and also either took out or altered virtually all the sex scenes and sex talk within the book.

So now finally we have the original version, as typed by the 29-year old Jack Kerouac, lightly edited in ways that are explained but basically intact. It reads like a dream. The actors now have their masks off and the whole book has a rougher and darker feel.

This new edition is a beautiful piece of book making - cover, binding, choice of paper and type, all excellent.

(Right: The cover of the very first edition of 'On The Road', published by Viking in 1957. This comes from a site that shows a marvelous selection of Jack Kerouac book covers from around the world. Also links to covers of works by Burroughs, Cassady et al.)

The beat goes on: Tracing Kerouac's tracks 50 years later: A restless spirit and 'holy' pie endure Charles M. Sennott [Boston Globe July 15, 2007]. He writes: 'With Jack Kerouac in the rearview mirror, I set out for a road trip. The idea was to retrace the first leg of the coast-to-coast odyssey chronicled in Kerouac's classic 1957 novel, "On the Road." A map drawn by the writer in a notebook unearthed from the Kerouac archives in his hometown of served as my compass. It showed a crudely sketched shape of the and a ragged line that traced the journey due west by Sal Paradise, the novel's narrator and Kerouac's alter ego.' See his animated slideshow of his journey with photographer Dominic Chavez. 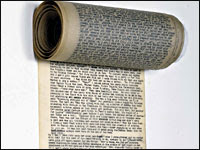 'The Scroll of Jack Kerouac' by James Elmont describes how in 2001 he went to see this beat artefact for himself at Christie's in New York, who sold it that year to Jim Isay, owner of the Indianapolis Colts football team, for $2.43m. Isay told the Associated Press: "My goal all along was to have it and share it with all those who want to see it, whether it's in this country or other countries," After the scroll was intially displayed in a museum in Indianapolis, it set out in January 2004 on a journey of its own - a 13-stop, four year national tour of museums and libraries. It is currently on exhibit in Kerouac's hometown of Lowell at the Boott Cotton Mills Museum, Lowell National Historical Park until October 14, 2007.

Was 'On The Road' the first 'non-fiction novel' - years before 'In Cold Blood' was claimed to be? See 'Truman Capote: Truth and Lies'

Thanks for the kind words about the book and my contribution. Am I right in thinking you are from Sussex? If so that's a nice touch as so am I. Thanks again

Thanks for a lovely looking compendium of word and image. My "Kerouac + scroll" google alert has finally brought a site of real substance to my attention. Being a graphic designer by trade I really appreciate the generously-sized and well-selected images, especially the book covers (I much prefer the cover of the UK edition of Kerouac's original scroll to American edition, by the way— I think UK book graphics are generally a lot easier on the eye). And, of course, "The Generalist" looks to be a good read.

I will definitely be back for more.