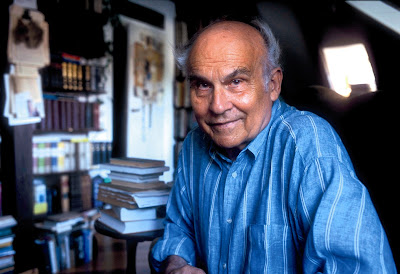 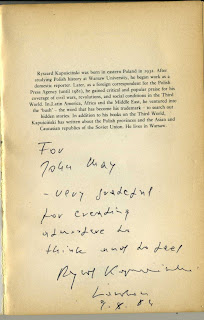 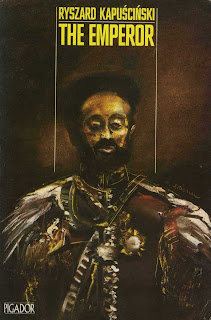 This first piece is an introduction to the life and works of Ryszard Kapuściński, who died in January this year. It presents the books currently available in English, the best magazine pieces that I have on file plus other useful material from the internet, This is followed by three further postings documenting my relationship with him.


'The Emperor', the first of Kapuściński's books to be published in the UK, first came out in hardback edition by Quarter in 1983. This paperback edition by Picador was published in 1984. The painting on the front is by Marshall Aruman. The inscription by Ryszard was on the occasion of our first meeting. It reads: 'Very grateful for creating atmosphere to think and to feel.' 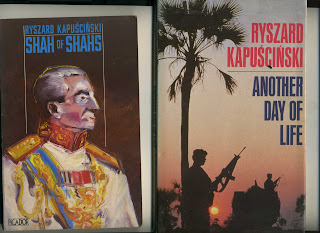 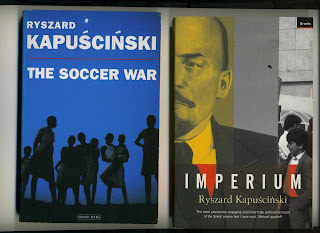 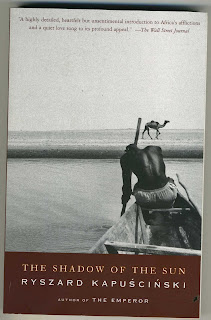 'The Shadow of the Sun' (Vintage International 2002)
'I lived in Africa for several years. I first went there in 1957. Then over the next forty years, I returned whenever the opportunity arose. I traveled extensively, avoiding official routes, palaces, important personages, and high-level politics. Instead, I opted to hitch rides on passing trucks, wander with nomads through the desert, be the guest of peasants of the tropical savannah. Their life is endless toil, a torment they endure with astonishing patience and good humour.

'This is therefore not a book about Africa, but rather about some people there - about encounters with them, and time spent together. The continent is too large to describe. It is a veritable ocean, a separate planet, a varied, immensely rich cosmos. Only with the greatest simplification, for the sake of convenience, can we say "Africa." In reality, except as a geographical appelation, Africa does not exist.'

Obituaries from the world's press


Famed Polish writer outed as 'spy' in anti-communist purge
Ian Traynor, editor [The Guardian/Tuesday May 22, 2007]The celebrated Polish writer and reporter, Ryszard Kapuściński, yesterday became the latest public figure to be "outed" as a "communist spy" in .Newsweek put the late writer, reckoned to be greatest east European journalist of his generation, on the cover of this week's issue, unveiling details of his communist-era secret police file and claiming that his global travels in the 1960s and 70s were due to a bargain he struck with the communist regime to collaborate with the secret police.

Kapuściński, who died in January, traversed the globe reporting on 27 revolutions and wrote several acclaimed books on central America, , , and the former . For most of his career in communist he was employed by the state news agency, PAP.He is the latest prominent Pole to be "outed" in what critics call a rightwing witchhunt orchestrated by a paranoid government that sees "reds under the beds" everywhere in .
Newsweek acknowledged that although Kapuściński had collaborated for five years in the 1960s he had not "supplied any significant documents". It was routine at the time for individuals allowed to travel widely to sign agreements with the secret police.

‘At play in the bush of ghosts’
Tropical baroque, African reality and the work of Ryszard Kapuściński by John Ryle.
[Times Literary Supplement 27 July 2001. Extended with post publication note, 2001 and 2007]

‘Into ’
Ryszard Kapuściński, the great prose poet of international disorder
By Chris Morris [LA Weekly. May 30, 2001]