STAR WARS TO OUR WARS: INTRO

The Strategic Defense Initiative (SDI) was proposed by U.S. President Ronald Reagan on March 23, 1983 to use ground-based and space-based systems to protect the from attack by strategic nuclear ballistic missiles. The initiative focused on strategic defense rather than the prior strategic offence doctrine of mutual assured destruction (MAD). Though it was never fully developed or deployed, the research and technologies of SDI paved the way for some anti-ballistic missile systems of today. The Strategic Defense Initiative Organization (SDIO) was set up in 1984 within the United States Department of Defense. It gained the popular name Star Wars after the 1977 science fiction film.’ – Wikipedia 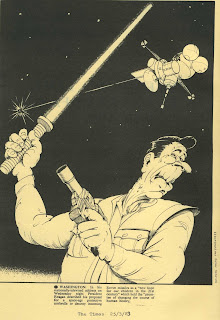 Naturally, I had to get involved. Some five years before I had been inside George Lucas' Star Wars empire in LA and the Industrial Light & Magic HQ north of San Fran, whilst producing a 'Making of..' newststand special on 'The Empire Strikes Back' (recounted elsewhere in this blog).

Now I was consulting to Greenpeace - my first project for the organisation - pulling together what was essentially a designed-up clippings book pulling together keynote articles and headlines from the debate that ensued from Reagan's announcement, this to be used for general international lobbying purposes. Naturally, when searching for a logo, we became the Rebel Alliance. 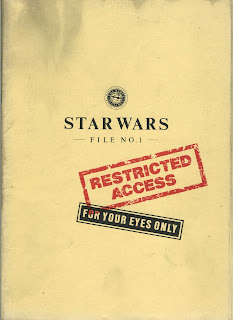 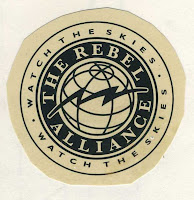 This was to be just a small part of a multimedia project incorporating a video, record, newspaper and merchandising.
Correspondence in the archive reveals letters to the likes of Thomas Dolby and Douglas Adams and to tv production companies. Nothing got off the ground in the end.

At the time I was developing the idea of 'Creative Protest' - in essence taking a much more professional approach to creativity and media in relation to campaigning.
at 3:38 pm