'One leg of the journey [around the Czech Republic] has seen me beetling through deepest Bohemian countryside, for a meeting with a man who is taking on the most powerful nation on the planet. It started me thinking that the underdog is a telling litmus test for democracies - flourishing, emerging, tenuous or non-existent. Jan Neoral is the mayor of a town which is due to find itself lumbered with a most unwelcome neighbour - the US army and its missile defence shield. So he and the 96 other members of his village decided to do something about it.'

- Blog of Harry de Quetville, foreign correspondent for The Telegraph. 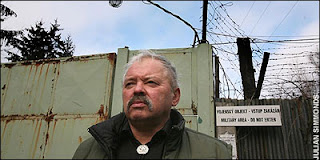 Here is the speech of Mayor Neoral

at the CND Conference ‘US Missile Defence: towards a new Cold war?’

Dear ladies and gentlemen, let me thank you for this possibility to speak to you. I deeply appreciate being able to inform you about our fight.

The Czech government want to build a radar in our country. Nearly three quarters of the nation stand against it.

Since January four government politicians – the Prime Minister, the Vice-Prime Minister, Minister of Defence and Minister of Foreign Affairs have been lying to us - that the radar's surroundings are going to be an "oasis of safety".

Even several days after the request to place the radar, the Prime Minister claimed to the nation that "this device does not radiate anything...", at a time when even professionals knew nothing about the radar.

This is a nonsense - because a radar is a device functioning on the principle of radiating electromagnetic energy. I have studied five years of electrical power frequency engineering, and I know how dangerous a radar of this frequency and power is.

Our attitude is not at all a sign of anti-Americanism or communist thinking. Also scientists, right-wing politicians, former president Clinton, and world celebrities are protesting, and professionals are warning.

Our village has 87 inhabitants. We carried out a local referendum on 17th March.

Legally we are unable to prevent the radar construction; through this referendum, however, we sent a strong moral signal to our government that we live here, that we do not want any radar here, that it is dangerous for Czech citizens. Other villages followed us with their referenda, by now there have been about 20 of them.

Anyway, the government has not considered our voices, they have treated us arrogantly and said the radar would be here because the government wishes it so. It is not our right to meddle.

Totally catastrophic communication levels by the government towards the public, together with amateurism and lies about the radar, have brought the deepest fears.

The government and politicians have entirely stopped communication about the radar with the citizens even though this is their basic duty.

Instead of giving credible information to the citizens they are paying Mr Klvaa, the director of the tobacco firm British American Tobacco, to lobby for the radar. They have positioned him between themselves and the citizens.

He has been persuading the Mayors of villages that if they agree they can be given grants for road systems, water pipelines, a sewage disposal plant. We know there is no money, and the government will not keep such a promise anyway. Besides, we will not exchange the safety and health of people for money.

A commission formed entirely from soldiers has been introduced by the government as a health commission. They will prove that the radar is not dangerous. It is the same as if the government sent a bee
poison producer to a bee keepers' meeting.

Foreign radar construction has been pursued by those politicians who were not given a mandate by the voters in elections. Politicians did not include the radar in their election programme at all. They despise the opinions of our national majority. They forget that their seats are temporarily granted by the voters.

Prime Minister, you and your three war-eager and militant ministers, you are sitting in these seats for the last time, you bet! Your voters will not forget how you despise them today!

The need for radar construction is being explained by arguments whose credibility is probably not trusted even by those who propagate them. First it is a North Korean threat, then a threat from .

Similar threats, if they existed, cannot be dealt with by militarisation of our planet and space. The only threat which clearly exists in connection with the radar is the threat of new arms race. This has - thanks to this action - unfortunately already started.

Politicians lie to us. On the basis of published video-recordings from a discussion with Borovna citizens, it has been proved that the Prime Minister himself was lying even during his interpolations in parliament.

In democratic countries, like or , such a Prime Minister would not be a prime minister any more. He is tolerated by us, though. It is evident then how bad is the condition of democracy with our right-wing government.

Last week we founded the "Mayors League" association against the radar. Towns have been joining villages in united progress. After a long time this is not only the first sign of civil society - but also people's bravery. In you might be used to this, however, it has not been that usual for us so far.

Claims by the government and generals that citizens are not competent and informed enough to decide on the radar in a national referendum is silly. Today, citizens have more information than the government about the radar's danger because they are interested in knowing it.

Army experts might be experts on army affairs, however, they remain "green brains" on social questions, historical lessons and peace-keeping. They do not conclude that in the case of any future conflict provoked by the , the radar will be the first target. And the whole as well.

And the government? We are suspicious that they follow odd goals, evidently just for their own political benefits - and their voters are not of interest to them any more.

At a discussion one lady raised this comparison: When new insulation was being tested on the space shuttle , the crew was told that the shuttle's take-off and landing would be perfectly safe. Yet the

shuttle burnt with all those on board. You are telling us that the radar will be totally safe. What will happen if this is not true and there are harmful effects?

Prime Minister Topolánek answered: People die everywhere. Some in wars, others in car crashes, some just die. Our Prime Minister is a cynic.

Americans have an unnecessary radar which they want to locate with us. It is a attempt to impose a base upon the which they could enlarge in the future. Even today it is clear that there will be two radars here, surrounded by Patriot missiles and troops to defend the radar; as the ambassador in said the government speaks about US interceptors.

There is a threat of disunity amongst European countries. It will bring new armaments and the escalation of tension between world powers. Terrorists always concentrate close to their target. It will be the end of

peace and safety in , perhaps in the world.

This is the view of people in Trokavec, villages close to forests of Brdy and the majority of the Czech people. To locate such a freak into a densely inhabited residential area can be done only by fools or criminals. And this is what we are going to fight against. And the criminals will be judged.