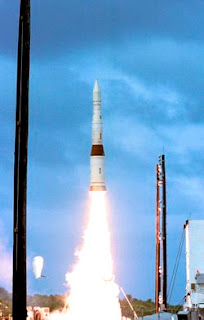 Under the administration of President Bill Clinton in 1993, the Strategic Defence Initiative (SDI) programme was renamed first as the Ballistic Missile Defense Organization (BMDO) and later as the Missile Defense Agency.

In the 1990s and early 21st century, the stated mission of what is now called National Missile Defense (NMD) has changed to the more modest goal of preventing the from being subject to nuclear blackmail or nuclear terrorism by a so-called rogue state. The feasibility of this more limited goal remains somewhat controversial.

(Right): A payload launch vehicle carrying a prototype exoatmospheric kill vehicle is launched from Meck at the Kwajalein on December 3, 2001, for an intercept of a ballistic missile target over the central . 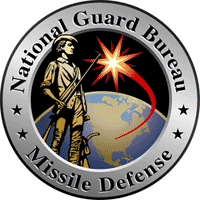 On 16 December 2002, President Bush signed National Security Presidential Directive 23 which outlined a plan to begin deployment of operational ballistic missile defense systems by 2004. The following day the formally requested from the and use of facilities in Fylingdales, , and Thule, Greenland, respectively, as a part of the NMD program. The projected cost of the program for the years 2004 to 2009 will be $53 billion, making it the largest single line in The Pentagon's budget.

[Above:The logo of the Missile Defense division of the U.S. National Guard]

Since 2002, the has been in talks with and other European countries over the possibility of setting up a European base to intercept long-range missiles. A site similar to the base in would help protect the and Europe from missiles fired from the Middle East or .

's prime minister Kazimierz Marcinkiewicz said in November 2005 he wanted to open up the public debate on whether should host such a base.

On 24 February 2007, The Economist reported that the ambassador to NATO, Victoria Nuland, had written to her fellow envoys to advise them regarding the various options for missile-defence sites in . She also confirmed that “The United States has also been discussing with the further potential contributions to the system.”

That same month, the started formal negotiations with and the concerning construction of missile shield installations in those countries. According to press reports the agreed to host a missile defence radar on its territory while a base of missile interceptors is supposed to be built in . The objective is reportedly to protect most of Europe from long-range missile strikes from .

Edited extracts from a highly detailed entry in Wikipedia